In an order issued on March 26, 2009, Judge C.L. “Buck” Rogers of the Circuit Court for Sumner County, Tenn., vindicated the right to protest government abuse by dismissing the libel lawsuit brought by Richard Swift, a developer who is a former member of the Clarksville City Council, and Wayne Wilkinson, a member of Clarksville’s Downtown District Partnership, against members of the Clarksville Property Rights Coalition (CPRC).

The court ruled, “Debate on public issues shall be uninhibited [and] wide open. . . .  Accusing a public official or public figure of using their political influence to obtain a benefit for others or themselves or favoring their supporters is not defamation.”

“The court’s decision is a tremendous victory for everyone who speaks out against the abuse of eminent domain,” said Bert Gall, a senior attorney with the Institute for Justice, which represents the CPRC in defense of their free speech rights.  “The decision puts thin-skinned politicians and developers on notice:  If you file a frivolous lawsuit against people just for criticizing your public actions, your case will swiftly be thrown out of court.” 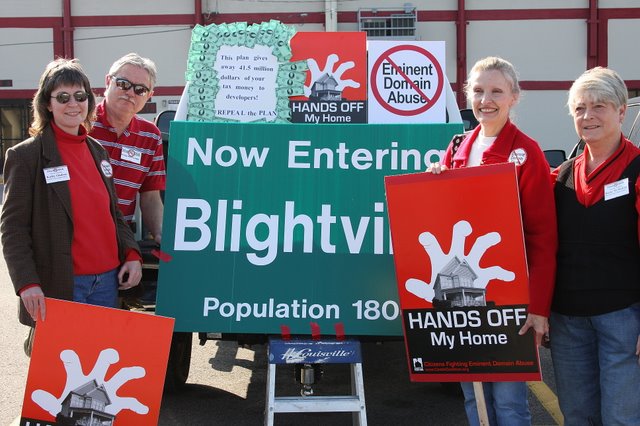 When a local ordinance “blighted” two square miles of downtown Clarksville, the CPRC was formed by residents and small business owners determined to protect their property.  against what they viewed as “flawed legislation.” A first meeting on the issue drew a full house (60+ people) to the H.O.P.E. center; a second meeting at the L&N Train Station brought an overflow crowd of more than 300 people to hear a presentation on the issue and sign peititions.

Across the country, in places like Renton, Wash., and Freeport, Texas, there has been an ominous trend of politicians and developers using frivolous litigation to suppress the speech of home and business owners who oppose the abuse of eminent domain for private development.  The CPRC’s victory in Clarksville resoundingly reaffirms that the First Amendment protects that speech.

“I am thrilled that the court reached the right decision to protect my right to free speech,” said Joyce Vanderbilt, a member of the CPRC.  “Swift and Wilkinson tried to bully us with this lawsuit, and the court just told them that they should never have brought it in the first place.”

“We won this fight not just for us, but for every home and business owner who gets sued just for speaking out against eminent domain abuse,” said Pam Vandeveer.  “I’m glad that this is still a free country.”