With Fort Defiance being closed due to the construction of the new interpretative center, the Friends of Fort Defiance were forced to move the Living History Encampment, one of their signature events to Rotary Park this year.

The primary purpose of the Living History Encampment is to educate people about the history of Clarksville, and the Civil War. Many people living in Clarksville know absolutely nothing about the history of our city, something the friends of Fort Defiance hope to change. Clarksville is located in an area of intense activity during the Civil war,   with Fort Donelson and Fort Henry  in nearby Stewart County, and the city of Nashville just a short distance up river.  Fort Defiance was intended to help guard the river approaches to Nashville. 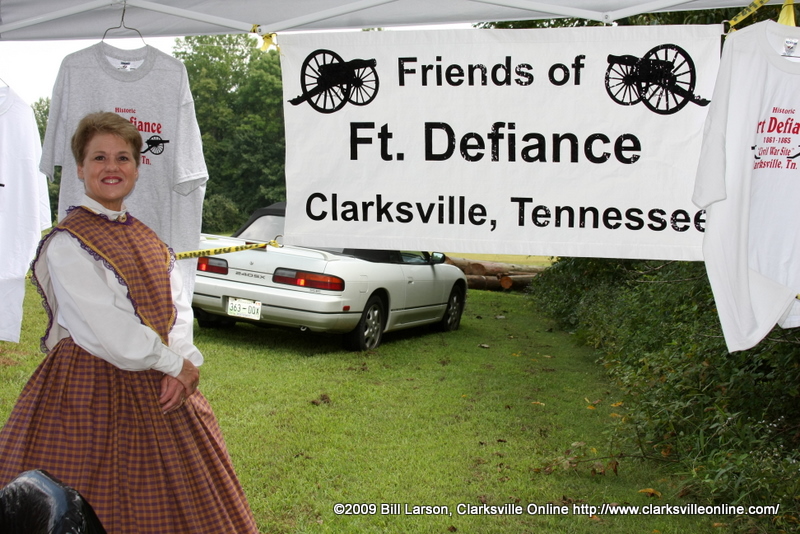 The Living History Encampment gives visitors a glimpse into the lives of soldiers and civilians through reenactors dressed in period costumes, with period equipment. Demonstrations include quilting, dress making, medical care, childrens toys and games, and of course military activities.

Mock gun battles were staged, giving visitors a feel for what combat was like during the Civil War. The battles also  included hourly firings by a 4 gun battery of canons.

The Civil War activities continue next weekend at Fort Donelson.

Interpretive programs and Civil War musket firings will be the highlight for Labor Day Weekend at Fort Donelson National Battlefield. This year’s programs, hosted by the 50th Tennessee Infantry (CSA), will also include a Civil War surgeon’s program. The Civil War camps will be set up on September 4 and 5, 2009.  The historic Dover Hotel will also be open for visitation during Labor Day Weekend from noon – 4:00 p.m.  All events are free.

The 50th Tennessee Infantry was organized as a regiment on Christmas Day, 1861 at Fort Donelson, and they comprised part of the Confederate garrison until February 1862. The 50th Tennessee Re-enactor regiment has been conducting programs for over 30 years at the park. Their camps will be opened from 10 am – 3 pm on September 4th and 5th, 2009.

About the Friends of Fort Defiance

The Friends of Fort Defiance seek to preserve our history for future generations and one of their major projects include the construction of the Fort Defiance Interpretative Center. They meet on the second Tuesday of every month at the Pardue Memorial Free Will Baptist Church, at 6:30 p.m. across from Moss’ Cafe on Memorial Drive. They welcome anyone who is interested in promoting Clarksville’s Civil War past and preserving and improving Fort Defiance.