HomeCommentaryMugly the Cat. A story of the unconditional love of a Mother
Commentary

Mugly the Cat. A story of the unconditional love of a Mother

Originally published in December 2008, republished for Mother’s Day 2010 at the author’s request.

Mugly was a farm cat to an elderly woman in Muhlenberg, Kentucky. She was quite nondescript as far as coloring, a bit of a mix of several dark colors all rolled into one. She was not fancy by any means, and was content living the outside life, catching mice, and sleeping on a patch of warm hay in the tool shed out by the barn. However, Mugly had a desire for something that went beyond farm life. She yearned for something that other female cats never gave much thought to. She wanted to be a mother to kittens. 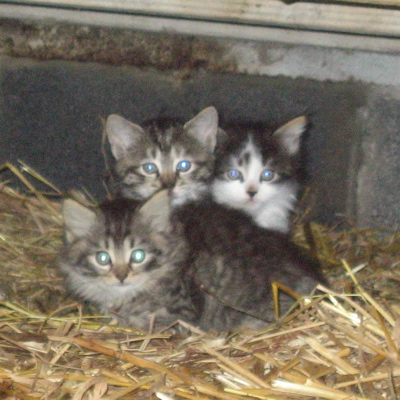 The Farmers wife never questioned Mugly why she hadn’t “dropped a litter of kittens yet” though she found it quite odd. Every Spring her female cats would all go into heat and several weeks later produce a wide variety of healthy, fiesty kittens, but not Mugly.

Mugly hated to see the other female cats on the farm run off and abandon their litters. It bothered her so much that she would take on the orphan kittens as her own. She would protect them while they were outside, stand by and watch attentively as the Farmer’s Wife would have to feed some of the younger ones with an eye dropper. As the left behind kittens got older Mugly was the one to teach them to hunt. Mugly was the one to lead them out to the garden. She would teach them how to dig and bury objects, and how to cover their tracks to prevent against predators.

She took pride with each new litter that was born on the farm.

The Farmer’s wife would look out her kitchen window and say “There goes Mugly again.” Mugly would be tiptoeing through the yard with a line of mix breed kittens following close behind her.

Mugly still wished to see her own kittens grow into adulthood, she thought of what her own kittens might look like, or smell like, and would she love them any differently? She doubted that much because her love for the left behind kittens was so fierce they were truly like her own.

Twelve years and hundreds of kittens later, Mugly had her first litter of her own!

She had them out in woods just before the first cold snap of Winter. She was overly protective of them, never leaving the small ones side. At night she would hurry to the house to warm up and eat a bit for herself so that she would be able to continue care for her litter. She would rush through her meals and scurry back to where she had them hidden. As nature would have it, she had the kittens in the wrong season, and one winter’s night she showed up at the Farmers wife’s door, slowly chewed her food and then went to lay down. The Farmer’s wife knew that her litter must not have made it.

Spring time came and Mugly bore another litter. This time all of them survived, and not only survived, but thrived. She was most proud of this litter, and for the first time was able to present her kittens to the other cat mothers and clean them and nurse them just as well as they could.

Every Spring for the next several years she would produce her own litter, as well as taking in others along the way. Her heart had no limits. She could love them all.

As Mugly grew older her litters became fewer and fewer, as well as the other litters on the Farm. There just weren’t many little ones needing caring for anymore. One day the Farmers Wife woke up, and Mugly was gone. She never returned. There are some who would say that Mugly went to find somewhere to lay down and pass on, but the optimists and dreamers like to think of her still out there in the hills of Southern Kentucky being Momma Mugly to a new litter of Left Behind kittens seeking guidance.

This Story was told to me by the Farmer’s son who now is the caretaker of the farm and its long Generation of Cats.

Beth Brittonhttp://www.haute4momma@blogspot.com
Beth Britton is a stay-at-home mom and freelance writer .She has been a contributing author with Clarksville Online since 2008.
RELATED ARTICLES
Commentary