Three APSU professors to sign books at Borders on Saturday

Three Austin Peay State University professors who are also published authors will be at the Borders Bookstore in Clarksville Saturday to sign copies of their books.

Dr. Antonio S. Thompson, assistant professor of history, Barry Kitterman, languages and literature professor, and Kell Black, professor of art, will all be signing and discussing their books at the store between 11:00am and 7:00pm.

It is the first book-length work that details the housing, working and entertaining of more than 10,000 German prisoners in Kentucky during World War II.

The novel tells two intertwined stories of Tanner Johnson. The first deals with him as a middle-aged man, so haunted by his past that he flees from his pregnant wife.

That past informs the second story in the book, which focuses on Johnson’s traumatic struggles and disillusionment 25 years earlier while serving with the Peace Corps in Belize. 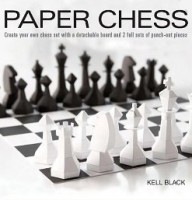 The book opens with a history of the game of chess, but the majority of “Paper Chess” consists of instructions and the unassembled pieces.

The book’s back cover provides a chess board that all the pieces were designed to fit.

The Borders Bookstore is located at 2801 Wilma Rudolph Blvd., inside the Governor’s Square Mall.