The short 20-kilometer distance took approximately two hours due to lack of roads and unforgiving rocky terrain. Seatbelts were the only thing preventing Soldiers from bouncing off vehicle roofs and each other as they bounced along the landscape.

“There are no good routes to get to the population,” said U.S. Army Capt. Steven M. Carmichael, of Columbus, GA, company commander with Company D, 2nd Battalion, 327th Infantry Regiment. “The districts are spread out. Often, this requires longer patrols and more overnight stays.”

After driving as far as they could with the vehicles, the platoon dismounted and trekked the remaining distance on foot, humping all their equipment, including mortar tubes, rounds, food and water up a steep mountain trail.

At the outpost, the Soldiers relentlessly attacked the hard ground with pick axes and shovels in order to fill the blast wall barriers with dirt and rocks. 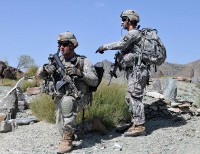 As they worked, the platoon remained vigilant due to the fact that they were within eyesight of the Pakistan border and two villages thought to be under heavy Taliban influence.

“We are sure (insurgents) come into Afghanistan here and flood into Kunar,” said Konopa. “With additional security, (the ABP) will be able to increase their patrols while feeling safer as well. Also, we will be able to perform larger and longer patrols in the area.”

When dusk approached, the men grabbed a bit of chow, and then prepared for the cool, windy night atop the mountain. Soldiers not on guard duty wrapped themselves in poncho liners, sleeping bags and anything else that could be used to shield themselves from the wind.

At the crack of dawn, they ate meals ready to eat in shifts before continuing on with their outpost fortification.

After a few hours of side-by-side work with the ABP, the men packed their gear, headed back down the mountain, and began their trip toward home base.

Twice on the return trip, the large mine resistant ambush protected vehicles were stuck. The Soldiers took action quickly by dismounting, hooking up tow bars and pulling or pushing the vehicles free.

After finally arriving home, tired from the journey and limited sleep, the Soldiers still managed to participate in physical training and eat a hot meal before finally getting some much-needed rest.

The missions may be long, bumpy and dangerous but each time the Soldiers go out, they remind themselves of the importance of what they do and why they do it.