The Soldiers not only want to get as much intelligence as possible, but they want the people in the city, located within 700 meters of their forward operating base, to know they are there when they need them.

“We want to make the Afghan people feel that they are safe while we are here,” said Jansky. “It is our goal to show the people that we are here for them and that we care.”

The Currahees use these presence patrols to build relationships with the people of KKC.

“We try to socialize with the locals and stop by their shops, buy food or clothing from them and show them a friendly face,” said U.S. Army Pvt. Randy Taylor, an infantryman with C Co., 1st Bn. of the 506th Inf. Reg., 4th BCT, 101st Airborne Div., and native of Pitkin, LA. “We want to show them that the U.S. Army is on their side.”

The Currahees have had both language and cultural training before they deployed, but many of the Soldiers on these patrols are making the effort to further their communication skills.

“I realize the more we pick up on their language and the demeanor [we] display when talking to the people, the more it helps,” said U.S. Army Spc. Charles E. Demler, an infantryman with Co. C, 1st Bn. of the 506th Inf. Reg., 4th BCT, 101st Airborne Div., and native of Odessa, Texas. “We are trying to communicate with them instead of coming through and pointing … at them.” 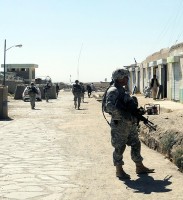 Another goal of the presence patrol is to show the local populace that the Afghan National Army soldiers are present and taking the lead.

It is important for the people to see that coalition forces are closely partnered with the ANA, and that they have been trained by the best, he added.

Overall, the Soldiers feel the presence patrols have successful outcomes.

“We have gathered [intelligence] from the people in the town just wanting to help us out,” said Jansky.  “You [have to] give credit to somebody who is trying to stand up for their country.”

“I know for sure they have to feel a very significant amount of safety from our presence here,” said Rooney. “We come in, and they know that the [U.S. Army] is on their side.”