HomeSportsTitans Travel to Kansas City to Battle the Chiefs
Sports

Titans Travel to Kansas City to Battle the Chiefs

Nashville, TN – The Tennessee Titans (6-8) play their second-to-last game of the regular season this week, as they travel to Kansas City to face the AFC West’s first-place Chiefs (9-5).

This week’s game will be televised regionally on CBS, including Nashville affiliate WTVF News-Channel 5. Bill Macatee will handle play-by-play duties, while Rich Gannon will provide analysis.

The Titans ended a six-game losing streak last week with a 31-17 victory at LP Field over the Houston Texans. Quarterback Kerry Collins directed touchdown drives on the team’s first three possessions of the game, forcing the Texans to play from well behind for the duration of the contest. The Titans defense registered four sacks and one interception, and the unit was able to limit the Texans to only 30 rushing yards on 17 attempts (1.8 average).

Collins tallied his second consecutive game with a passer rating of more than 100, completing 14 of 24 passes for 237 yards, two touchdowns and one interception. His primary target was wide receiver Kenny Britt, who, in his second game back from a hamstring injury, contributed a team-leading six catches and 128 receiving yards.

Running back Chris Johnson posted his second consecutive 100-yard game and his eighth of 2010, gaining 130 yards and a score on 24 carries. He ranks fourth in the NFL with 1,267 yards on the ground this season. 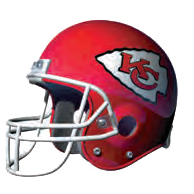 In their second season under head coach Todd Haley, the Chiefs have transformed from the lastplace team in the AFC West in 2009 to the division leaders in 2010. With two games to play, the Chiefs are in position to capture the division crown with a win versus the Titans paired with a San Diego loss at Cincinnati.

Last week the Chiefs traveled to St. Louis and posted a 27-13 win over the Rams. The Chiefs rushed for 210 total yards, including 126 by Jamaal Charles and 62 by Thomas Jones. Each of the two backs recorded a touchdown.

Charles enters this week’s game ahead of Johnson and ranked third in the NFL with 1,303 rushing yards. The third-year running back, who was a member of the same 2008 draft class as Johnson, leads all NFL running backs this season with a 6.4 yards-per-carry average. The Chiefs’ rushing attack is ranked first in the NFL.

Quarterback Matt Cassel, who is in his second season with the Chiefs since being traded by the New England Patriots, has thrown 24 touchdowns to just five interceptions this season. He is ranked fifth in the NFL with a 96.2 passer rating.

The Titans and Chiefs share a historic rivalry that dates back to the formation of the American Football League. In 1959, Titans owner K.S. “Bud” Adams, Jr. and the late Lamar Hunt, founder of the Chiefs, spearheaded the “Foolish Club,” a group of eight original AFL teams that would begin play in 1960. Adams’ Oilers would play in Houston until moving to Tennessee in 1997, while Hunt’s original Dallas Texans moved to Kansas City in 1963.

The Titans and Chiefs have met 47 times with the Chiefs leading the series, 27-20. The Titans have won the last two matchups, most recently a 34-10 victory at Arrowhead Stadium on October 19th, 2008.

Titans-Chiefs Series At A Glance

The Titans and Chiefs are historic rivals that played an integral role in the formation of the current NFL landscape. In 1959, Titans owner K.S. “Bud” Adams, Jr. and the late Lamar Hunt, founder of the Chiefs, spearheaded the “Foolish Club,” a group of eight original American Football League teams that would begin play in 1960. Adams’ Oilers would play in Houston until moving to Tennessee in 1997, while Hunt’s original Dallas Texans moved to Kansas City in 1963. In 1970, the AFL and NFL merged, and the Oilers and Chiefs became members of the American Football Conference.

The Titans and Chiefs have met 47 times with the Chiefs leading the series, 27-20. After a four-game winning streak from 1990-93, the Titans lost five out of six games against the Chiefs before winning the most recent two matchups. Tennessee has six wins in 13 all-time games at Arrowhead Stadium.

In 2008, the Titans came off their bye week with a visit to Kansas City. Behind 149 rushing yards by LenDale White and 168 yards by Chris Johnson, the Titans set a new franchise record with 332 team rushing yards in a 34-10 victory. White contributed three touchdowns, including an 80-yarder, in the win.

When the Titans traveled to Kansas City in Week 15 of the 2007 season, they needed a win to keep their playoffs hopes alive. They battled to a 26-17 victory, setting the stage for their Wild Card push and getting the first victory of their eight-game regular season winning streak.

The two clubs have met twice in postseason play, and the Chiefs were victorious both times. They met on December 12th, 1962 in the third AFL Championship Game, a contest won by the then-Texans on a Tommy Brooker field goal in double overtime. On January 16th, 1994, Joe Montana completed three touchdown passes in the second half to help defeat Warren Moon and the Oilers by a final score of 28-20.