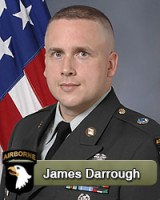 Fort Campbell, KY – A Fort Campbell Soldier was killed after the vehicle he was traveling in, was struck by a vehicle-borne improvised explosive device, October 29th, in Kabul, Afghanistan.

A memorial service will be held for Darrough in Afghanistan. Fort Campbell holds a monthly Eagle Remembrance Ceremony to honor fallen Screaming Eagles. The next ceremony will be held November 9th at 4:00pm.