Clarksville, TN – For as long as I can remember New Years Day has always been a time for reflection, resolutions and change. But as we usher in the 2012 New Year, quality of life changes are not the only things we all need to consider.

January 1st, 2012 also brought with it the installation of the new Tennessee Voter Photo ID Law. The new law requires all people to show a valid state or federal government-issued photo ID in order to vote at the polls.

Regardless of political party affiliation, without the proper photo ID, you won’t be able to vote for anyone during the election season this includes National, State or Local elections such as the President, school board, city council, congress or House of Representatives both federal and state levels, etc.

Laws like these are popping up across the nation and are being met with arguments and lawsuits challenging whether it is even legal to require people to have photo id’s in order to vote.  Some have stated that it may be unconstitutional as well or really just a flash back to the Jim Crow era when the powers that be used hidden poll taxes to stop or limit a group of people from voting.

Never the less the law is still the law and until these challanges reach the supreme court and are decided upon you must show a valid state or federal government-issued photo ID in order to vote at the polls.

Each panelist was provided the opportunity to present information on the new law then the floor was opened up for questions from the audience.

Montgomery County Administrator of Elections Ms. Vickie Koelman who works under the supervision of the Tennessee State Election Commission and the Tennessee Secretary of State’s Office give a very powerful and comprehensive PowerPoint presentation that is being shown at town hall meeting and forums across the state of Tennessee in an effort to education voters on the new TN-Voter Photo ID Law.

The following is information from her presentation as provide by the state, county, election commission offices and the Tennessee Secretary of State’s Office.

Beginning January 1st, 2012, all voters must present an ID, meeting the requirements below, containing the voter’s name and photograph, whether voting early or on Election Day.

Any of the following IDs may be used, even if expired 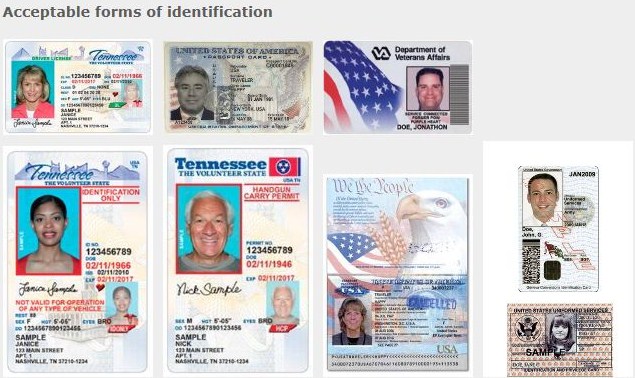 What forms of photo ID are NOT acceptable?

What if I don’t bring a photo ID to the polling place?

What if I don’t have a photo ID?

Where can I find out more information?

Please notify your county election commission if your address changes.