Hancock, 23, a soldier in the U.S. Army Marksmanship Unit from Eatonton, GA, eclipsed his own records set at the 2008 Beijing Games for both qualification (123) and total (148) scores. He struck gold in China with a qualification score of 121 and total of 145.

Hancock prevailed by two shots over silver medalist Anders Golding (146) of Denmark and by four shots over Qatar’s Nasser Al-Attiya (144), who secured the bronze medal by winning a shoot-off against Russia’s Valeriy Shomin.

He began shooting as a young child and started competing when he was 11 years old. He has won World Cup events in 2005, 2006, and 2008; was named USA Shooting Shotgun Shooter of the Year in 2007 and USA Shooting Shooter of the Year in 2006; won the World Championship in Men’s Skeet in 2005; and in 2003 was the Junior Men’s Skeet National champion.

Hancock was profiled by Shooting USA before the 2008 Olympics.

About the U.S. Army Marksmanship Unit 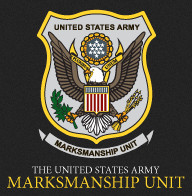 The United States Army Marksmanship Unit (USAMU) was established 1 March 1956 at the direction of President Dwight D. Eisenhower to raise the standards of marksmanship throughout the U.S. Army.

Since 1956, members of the USAMU have gained worldwide respect by winning hundreds of individual and team national titles, more than 40 World Championships, and 23 Olympic medals.

The USAMU enhances combat readiness through the unit’s provision of technical and advisory assistance in the development of military match-type small arms, equipment and ammunition. Upon request, USAMU will coordinate and conduct rifle and pistol marksmanship train-the-trainer clinics for U.S. military units throughout the world.

Additionally, the unit has the responsibility to promote the U.S. Army by heightening public trust and confidence in Army Marksmanship. These efforts are accomplished through active public information awareness programs, which assist the U.S. Army Accessions Command’s increasing requirement for top quality new recruits. The basis for these efforts focuses on the accomplishments and capabilities of USAMU shooters and technicians. USAMU soldiers also serve to enhance the public trust and confidence in the Army’s lethality with small arms.

USAMU is composed of six competitive shooting sections utilizing world class facilities for both training and competition. Facilities consist of 260 acres with 7 ranges and 18 buildings. Service Rifle, Service Pistol, Action Shooting, International Rifle, International Pistol, and Shotgun comprise the shooting sections and are renowned as the “best in the world”. Of these teams, only International Rifle, International Pistol, and Shotgun are Olympic sports. Support is provided to these Soldier-athletes through the Custom Firearms Shop and the support branches of supply, operations and administration.

The unit makes or customizes its own small arms and much of its own ammunition through the Custom Firearms Shop. The Custom Firearms Shop, made up of gunsmiths, machinists, range technicians and ammunition loaders, could be called the “backbone” of the unit and is equivalent to the “pit crew” of NASCAR. In fact, it was the first section formed when the unit was established. In order to compete successfully, it was determined better arms and ammunition were required. Here, gunsmiths build top-quality competitive-grade rifles and pistols for our competitive teams…many from the ground up. The custom Firearm Shop’s research and development efforts have led not only to enhanced accuracy and reliability of our competitive weapon systems and ammunition, but have intensified the combat effectiveness of the entire Army. It is here that the M-21 and M-24 Sniper Systems, Special Purpose Receiver Rifles and Squad Designated Marksman Rifles were developed and tested.

The extraordinary combined efforts of the assigned soldiers and civilians of the U.S. Army Marksmanship Unit are why we have come to be known as
“The Home of Champions”.