2012 Tennesse Titans Community Man of the Year is Jared Cook

Nashville, TN – The Tennessee Titans announced today that tight end Jared Cook has been named the 2012 Titans Walter Payton Man of the Year Award winner.  Cook was selected by a voting panel that consisted of his teammates, Titans staff, members of the news media and local non-profit and community executives for his dedicated community service.

Cook is now a finalist for the league-wide 2012 Walter Payton NFL Man of the Year Award that will be awarded during Super Bowl week in New Orleans.  This prestigious NFL award has been in existence since 1970 and is the only NFL award that honors players who demonstrate outstanding balance in their lives between civic and professional responsibilities.

In 1999, the NFL renamed the award after the late Walter Payton as a tribute to his greatness, both on and off the field.  Man of the Year candidates were chosen based on guidelines from the NFL that state all candidates should have completed at least 3 seasons in the NFL and be currently playing in at least their fourth season in the league.

“This means a lot to be selected by my peers and to be in the same class as so many Titans legends to have won this award before me,” said an emotional Cook after the announcement.  “My mom always told me that when you’re afforded the opportunity to something to help others, you should do it and that’s always been my motivation.  A lot of this work has been for my mom, I do it all for her as well as to help others!” 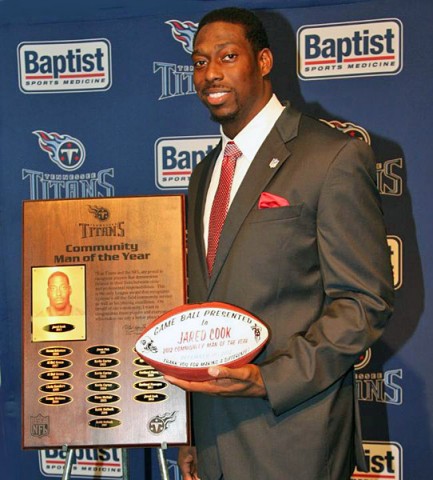 In a very close vote, Cook was selected from a group of eligible finalists that included Rob Bironas, Michael Griffin, Matthew Hasselbeck, Chris Johnson, Tim Shaw and Will Witherspoon.  These finalists were named “Titans 2012 Community All-Stars” for their community service contributions and each were presented a “Community All Star” game ball earlier today in a team meeting. Mr. Adams and the entire Titans organization are very proud of the terrific community efforts of all players, who continue to make a difference in the lives of those less fortunate in our community.

“I’m proud of Jared and also of the other nominated players who have done such a tremendous job of serving so many in our community,” said Titans Owner/President K.S. “Bud” Adams, Jr.  “His work in the community, especially his dedication to raising awareness and funding for breast cancer research, is very commendable.  It is very important to me that everyone in the Titans organization realizes that they have an opportunity at some level to assist those less fortunate and Cook’s efforts are truly deserving of this honor.  He joins an elite group of players from our past to be honored as the Titans Community Man of the Year.”

Cook was selected by the Titans in the third round of the 2009 NFL draft.  As of today, he has 44 receptions for 523 yards and four touchdowns this season, including an 18-yard TD grab yesterday versus the Colts.  Cooks’ current career totals are 131 receptions for 1,717 yards with a career long of 80 yards for a touchdown against Cleveland in 2011.

Cook’s great passion for community service continues to grow as he has taken a more active role in supporting efforts to both raise awareness regarding early breast exams and fundraising efforts for breast cancer research. Cook’s dedication to these efforts due to fact his mother, Yulinda Cook, is a breast cancer survivor. He continues to make annual visits to local hospitals and schools and has participated in annual Titans Caravan.

Among Cook’s many charitable efforts in this area are:

Cook now joins an elite group of players that have won the award since the team moved to Tennessee in 1997.