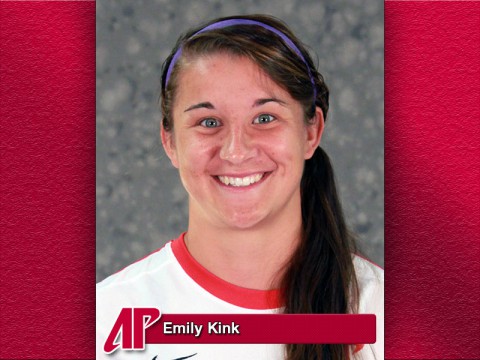 The honor was the second weekly OVC award of Kink’s career; she won an Offensive Player of the Week award for Aug. 24th, 2010.

Senior forward Tatiana Ariza, of the women’s soccer team, scored the go-ahead goal in Austin Peay’s 1-1 draw at Western Kentucky and assisted on Gina Fabbro’s game-winner at Lipscomb. The Bogota, Colombia native has six goals and two assists on the season.

Senior tailback Tim Phillips, of the football team, rushed for a team-high 67 yards on nine carries (7.4 ypc), including a 48-yard third quarter run that was Austin Peay’s longest play from scrimmage in 2013 and set up the Govs third-quarter field goal against Vanderbilt.

Senior outside hitter Calyn Hull, of the volleyball team, was named to the MT Invitational all-tournament team after recording 65 kills in four matches over the weekend. She recorded a career-high 25 kills in Austin Peay’s five-set victory against North Dakota.

Senior Xiamar Richards, of the women’s cross country team, set the school two-mile record at the Powerade Invitational with an 11:23.78 mark, finishing runner-up and breaking the 11-year old record set by former All-American Sheena Gooding by more than 13 seconds.