Gray recorded the first triple-double in Austin Peay women’s basketball history against Trevecca, Monday, scoring 13 points, dishing out 12 assists and pulling down 11 rebounds against the Trojans. The assist and rebounding numbers were both career highs for the Clarksville native. 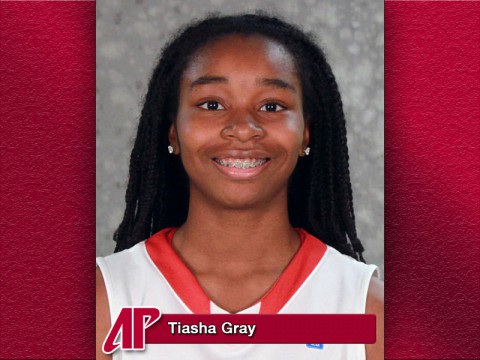 The 12 assists Gray tallied on the evening were the most by a Lady Gov since Emily Pollock had 11 against Miami, November 29th, 2008.

Gray didn’t fare too terribly in Austin Peay’s other two contests last week. She led the Lady Govs with 19 points in Friday’s 79-69 loss to Arkansas State and scored 14 points along with six assists, six steals and the game-winning bucket at Southern Illinois on Tuesday.

Freshman Rashaan Coleman, of the football team, led the Govs with 109 yards rushing and three touchdowns, to go with a team-high five catches for 32 yards, in Austin Peay’s 36-34 loss to Southeast Missouri in the 2013 home finale.

Sophomore setter Aubrey Marsellis, of the volleyball team, filled the stat sheet in both Lady Gov contests last week. In Tuesday action at Murray State, she had 12 kills, a team-high 27 assists and 10 digs, and followed that up with a team-high 14 kills and 16 assists at Morehead State.