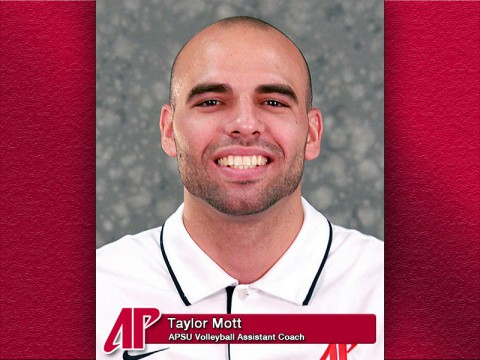 Under his guidance, Austin Peay saw middle blocker Lauren Henderson evolve into an All-OVC selection and OVC All-Tournament pick in 2013. She posted career best totals in blocks (120) and kills (294) during her senior campaign and ultimately was invited to the U.S. Women’s National Volleyball Team in February.

“I have enjoyed my time working at Austin Peay and with the volleyball team,” said Apolinario. “It has been a rewarding experience as I learned to teach and coach the young women in this program. Hopefully, I was able to impact their lives as much as they impacted mine.”

“Ariel is taking advantage of a great opportunity and I know I speak for the team and myself when I wish him all the best,” said Mott. “Ariel has done a remarkable job instructing this team in his short time here and it showed with the performances our middles put forth last season.”

With Apolinario as her assistant, Mott has led the Lady Govs to consecutive second-place finishes in the Ohio Valley Conference’s West Division. Austin Peay posted a 10-6 mark in 2012 before notching a 9-7 conference record in last season’s injury-plagued campaign. The Lady Govs will return 10 players from last season’s team, including two of its three middle blockers.