Clarksville, TN – Junior Iago Seffrin, of the Austin Peay State University men’s tennis team, has been named this week’s Copies in a Flash APSU Athlete of the Week.

Seffrin earned Ohio Valley Conference Men’s Tennis Player of the Week after winning both his No. 4 singles matches last week to run his current winning streak to seven matches. He defeated Morehead State’s Nick Mercer (6-0, 6-1) on Saturday and his 6-4, 6-4 win against Eastern Kentucky’s Sebastian Mueller clinched the victory for Austin Peay. 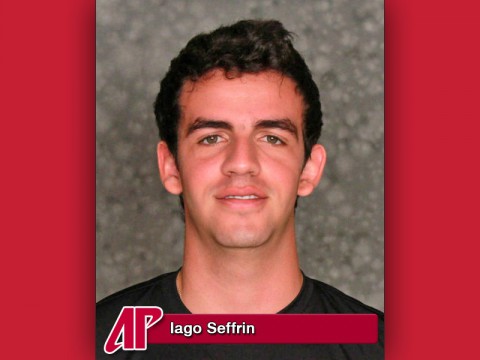 The Brazilian has teamed with fellow junior Dimitar Ristovski to go 12-2 at doubles this spring; the pair has won three in a row and eight of their last 10 after dispatching Morehead State (8-5) and Eastern Kentucky (8-4) this weekend.

Seffrin’s weekly honor from the conference is the first of his Austin Peay career and second by a Gov in 2014 after Jasmin Ademovic shared the March 18th honor.