Clarksville, TN – A quartet of outgoing seniors left an indelible mark on Austin Peay athletics by earning all-conference honors in each of their four seasons on campus.

In addition to her four first-team honors, Tatiana was the 2012 OVC Offensive Player of the Year. 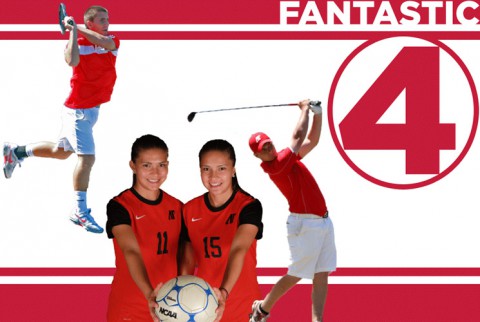 Men’s tennis standout Jasmin Ademovic made his own bit of history, becoming the first four-time first-team All-OVC honoree in program history after battling through an ankle injury. The Bosnian- bred Ademovic was part of the 2013 squad that captured Austin Peay’s first men’s tennis conference championship since 1974.

Anthony Bradley put the finishing touches on his Austin Peay career with yet another top-five finish at the OVC Championships, his third straight. He was the individual medalist in 2012, advancing to the NCAA Bowling Green Regional, and joined Erik Barnes (2007-10) as the only Govs golfers to earn four straight All-OVC nods. The Englishman also earned an OVC championship ring in his career, helping the Govs win the 2013 title.