Clarksville, TN – Most people don’t think in terms of solar power when it comes to campus traffic issues, but APSU Physical Plant Director, Tom Hutchins was thinking solar was a perfect solution to remedy a growing traffic related issue around campus — pedestrian safety.

As the campus has grown, nearly doubling in size during the last decade, and the paths people took from classroom to classroom changed, so did the places where pedestrians cross streets.

These changes initiated Hutchins and Mitch Robinson, APSU Vice President for Finance and Administration, to find ways to help increase driver awareness of high traffic areas for pedestrians. However, the solution wasn’t exactly a straightforward decision.

A simple and highly effective method for slowing vehicles can be accomplished by using traffic calming devices such as speed tables, speed bumps, etc.

However, these methods are problematic for emergency response vehicles, causing them to slow to a near stop — less than ideal when every second counts. 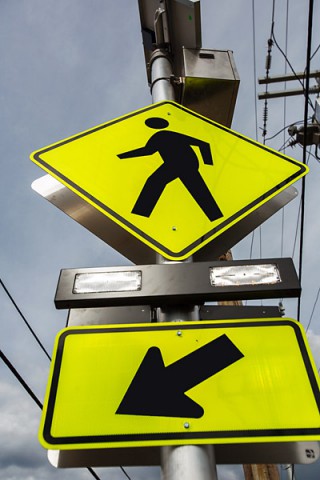 Since the university is predominantly comprised of city streets, a less obstructive, yet effective solution had to be found. In comes the idea of crosswalks with solar powered flashing pedestrian crossing signs.

Technically termed Rectangular Rapid Flash Beacon (RRFB crossing) these systems are becoming an increasingly popular solution popping up in cities around the country. According to Hutchins, the device has a significant ability to slow traffic for pedestrians.

“These are solar powered LED lights that flash at a frequency comparable to emergency vehicles,” said Hutchins. “These have an effective rate for slowing approximately 80-90 percent of drivers as compared to traditional crossings, which only have approximately 20-30 percent effectiveness.”

Hutchins said that compared to other electrical powered devices, these systems are much more cost-effective to install and maintain. “The units are self contained solar charged battery units that last 3-5 years per battery. Since they are self contained, digging and connecting underground electrical isn’t needed, and that saves a significant amount of added labor and expense, as well a planning.”

The new crosswalks have been added on Marion Street and Eighth Street. Cost for each crossing is approximately $10,000 for the system and construction.

The crossings are Americans With Disabilities Act (ADA) compliant and feature a simple touch-sensitive button for users to activate prior to crossing.