Fort Campbell, KY – Thirteen years after one of the most tragic days in American history, Soldiers, families and civilians at Fort Campbell still feel the effects of the September 11th attacks.

Soldiers from the installation are still in Afghanistan fighting America’s longest war and their families are still making the sacrifices to support them.

With that in mind, Soldiers from the 101st Special Troops Battalion, 101st Sustainment Brigade “Lifeliners,” 101st Airborne Division, had the honor of commemorating September 11th with the children of their adopted school, Marshall Elementary School, at Fort Campbell, Kentucky.

Dressed in their resplendent Army Service Uniforms, the battalion commander, command sergeant major, honor guard and other Soldiers took part in the school’s first assembly of the year. Lt. Col. Alexander Gallegos, commander of the 101st STB, opened the ceremony to enthusiastic applause from the children. When he asked if any children had parents currently deployed, children from every grade raised their hands.

“For these kids in this school, they know their mom and dad are deployed and are doing great things. They just need to understand why,” said Gallegos. “It’s important that children understand that, yes, bad things occurred on September 11th … but there was also some goodness.” 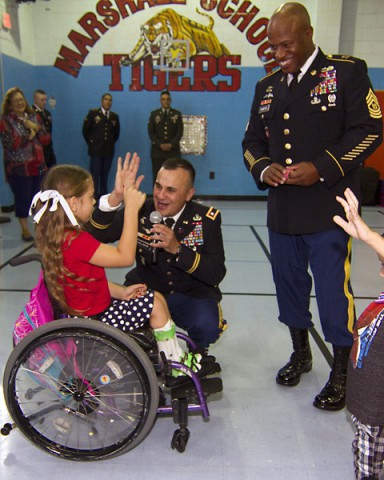 Gallegos heard about the attacks at the recruiting station in Boise, Idaho, and knew it would change his life, he said. He was glad to volunteer so he could help explain to this generation – born after the attacks – why September 11th matters.

“It’s an important chapter in history, because their parents and people they know have contributed to it,” he said.

His opening remarks honored all of the fallen and the sacrifices the nation has made in the past 13 years, including the students. As he finished his remarks, the students enthusiastically shouted a thunderous “Air Assault” to show their pride for being part of the Fort Campbell family.

“When they were yelling ‘Air Assault,’ they knew they were part of something much greater than themselves,” said Gallegos. “If we can go there and help foster that and help improve that … as those children grow up, all we’re doing is [continuing] to reinforce that were’ the greatest Nation with the greatest military and the greatest civilians on earth.”

During the next part of the ceremony, the honor guard entered the gym with the U.S. flag and battalion colors. Everyone stood for the national anthem and recited the Pledge of Allegiance.

Sgt. Matthew Webber, the NCO in charge of the honor guard, said they had spent nearly a month practicing drill and ceremony twice a day to be ready for the assembly. All of the practice resulted in crisp, precise movements and impeccable military bearing during their part of the ceremony.

“I was a senior in high school, and I just remember when I woke up that one of the planes already hit, and within five minutes after that, the other plane hit and that’s when everything went crazy,” said Webber. “You never want to forget or it could happen again.” 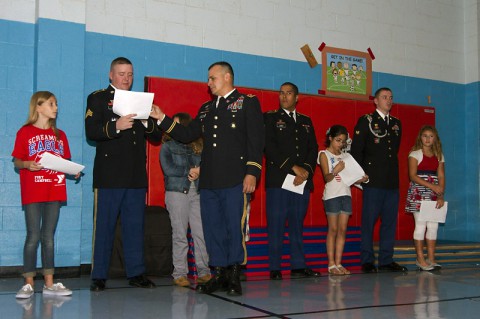 Then Soldiers and students took turns reading the book “Fireboat: The Heroic Adventures of the John J. Harvey.” The book talked about a fireboat that many thought wasn’t needed anymore, yet after the attacks on the World Trade Center in New York City, the city needed the John J. Harvey, and it responded to the attacks. 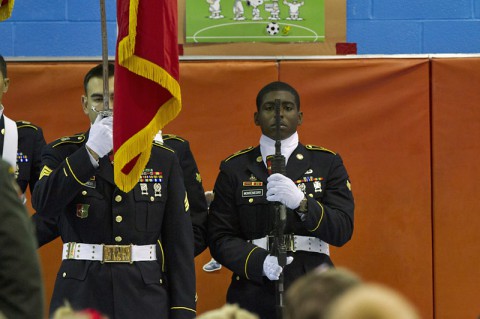 “Looking for a book was important,” said Gallegos. “Because given the grades kindergarten through fifth grade, I felt that it was important that we got the message right, and we didn’t focus on the negative aspects, but really what could they draw from it. What positives themes are there?”

The ceremony concluded with Gallegos and Command Sgt. Maj. Christopher Crawford, the battalion’s command sergeant major, quizzing the students on the book and September 11th in general. His last few questions to the students asked them to name a hero and describe what makes somebody a hero.

He said he wanted to convey the message that anybody could be a hero and he thought the children learned that lesson.

“There was an entire community of first responders and normal everyday citizens who went out there and sacrificed their lives,” said Gallegos. “The kid who said a hero is someone who stops bad things from happening – You think about heroism it’s often related to something that could have went the wrong way, so that kid was so insightful.”

Joanne Rosengrant, a guidance counselor with 31 years at Fort Campbell, was proud of the students. She was at the school when the attacks happened, and the day was very emotional for her. She said the students were excellent during the assembly. She described them as well-engaged, interested and enthusiastic about the presentation. She said one of the best things about working at Marshall Elementary is the children.

“They live and breathe heroes,” said Rosengrant. “They have career week in the spring and they’re told that they are heroes too that the parents are heroes, and it’s being able to be brave and face new challenges.”