Clarksville, TN – For the second consecutive week senior outside hitter Jada Stotts, of Austin Peay State University volleyball team, has been named the Copies in a Flash APSU Athlete of the Week.

During the Ohio Valley Conference-opening weekend, Stotts led the Lady Govs with 46 kills and 44 digs, posting 20-20 efforts in wins against UT Martin and Southeast Missouri to help the Lady Govs get off to a 2-0 start in OVC play for the first time since 2010. 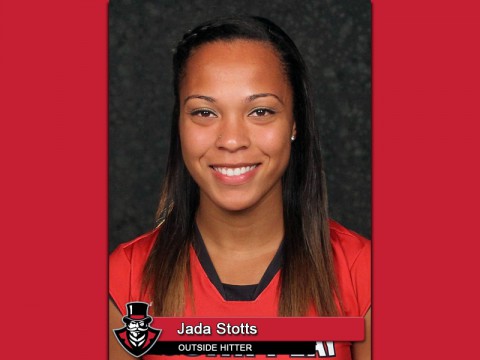 The Hoffman Estates, IL, native posted 22 kills and 23 digs against UT Martin, including her 1,000th career kill, and backed that up with a 24-kill, 21-dig performance against Southeast Missouri.

Monday, Stotts was named adidas®/OVC Offensive Player of the Week, her third career weekly honor from the league and second in as many weeks. She also earned Tennessee Sports Writers Association Player of the Week honors for the second week in a row as well.