Yonkers, NY – Consumer Reports released its own analysis of the most recent government data on mercury in fish, found that it continues to be critical for consumers to pay close attention to the fish they consume, and has updated its advice for consumers. 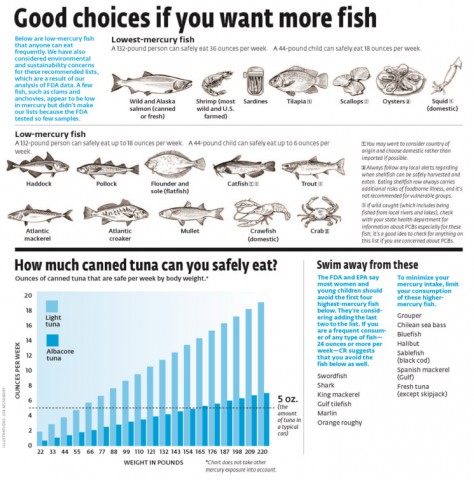 Two federal agencies recently recommended that because fish is a good source of omega-3 fatty acids and other nutrients, women of child-bearing age and young children should eat more lower-mercury fish.

While Consumer Reports (CR) agrees that eating fish can be healthy, it analyzed Food and Drug Administration (FDA) data to determine its own recommendations for lower-mercury options.

Getting too much mercury can damage the brain and nervous system.

“We’re particularly concerned about canned tuna, which is second only to shrimp as the most commonly eaten seafood in the United States. We encourage pregnant women to avoid all tuna,” said Jean Halloran, director of food policy initiatives for Consumers Union, the advocacy arm of Consumer Reports.

Last June, for the first time, the FDA and the Environmental Protection Agency (EPA) set a firm minimum level for weekly fish consumption, including shellfish.  The federal proposal encourages women who are pregnant, breast-feeding or trying to become pregnant to eat between 8 and 12 ounces of fish per week, and for children, it suggests a minimum weekly quota dependent on their age and nutritional needs.

Consumer Reports analyzed the FDA’s own data that measures mercury levels in various types of seafood and found almost 20 seafood choices that can be eaten several times per week, even by pregnant women and young children, without worrying about mercury exposure.

In fact, for women who are pregnant or nursing, fish can also contain an important fuel for a baby’s brain development. Fish with the lowest mercury levels includes salmon (Alaskan or other wild), scallops, shrimp (most wild and U.S. farmed), tilapia and more; low-mercury options include catfish, crab, flounder and sole (flatfish), and trout.

The full report, “The Great Fish Debate” is featured in the October 2014 issue of Consumer Reports magazine and is available at www.ConsumerReports.org.

What Consumers Can Do

Other than the new advice on the minimum weekly fish consumption, most of the other federal recommendations are essentially the same ones given in 2004. The agencies advise that young children and women of child-bearing age avoid four fish with the highest mercury levels: swordfish, shark, king mackerel, and tilefish from the Gulf of Mexico.  They are also considering adding marlin and orange roughy to that list.

While Consumer Reports agrees that those groups should avoid high-mercury seafood, the organization disagrees with the latest recommendations from the FDA and EPA on how much tuna women and children may eat—and believes pregnant women should avoid eating any tuna.

Even adults can experience the toxic effects of mercury if they consume too much high-mercury fish. Therefore, Consumer Reports also suggests that anyone who eats 24 ounces (1.5 pounds) or more of fish per week, should also steer clear of high-mercury choices, which includes sushi made with tuna.

For more information on Consumer Reports good fish choices and call for action from the FDA and EPA, check out the October 2014 issue of Consumer Reports or online at www.ConsumerReports.org.