The command sergeant major of a unit at the battalion level and higher serves as the senior enlisted member, charged with mentoring Soldiers, upholding standards, enforcing discipline and giving sound advice to the commander and officers in the unit.

A part of a command sergeant major’s ceremonial duties is to serve as a custodian of the unit’s colors, the flag that represents the organization and which the unit carries next to the U.S. flag.

Standing in front of the crowd at the ceremony, Crawford performed this ceremonial duty one last time, as Master Sgt. Pete T. Leao, acting as the 101st STB commander of troops, took the colors from the honor guard and passed them to Crawford. 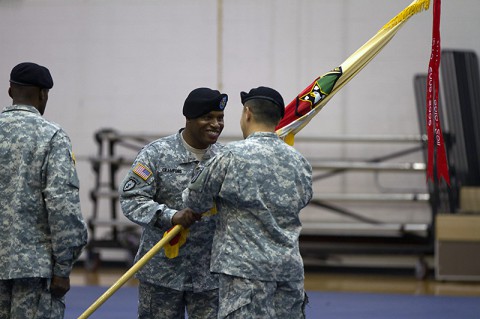 Crawford then passed the colors along with his duties and responsibilities as command sergeant major for the battalion to Lt. Col. Alexander Gallegos, the commander of the 101st STB. Gallegos then passed the colors to Graham, symbolically entrusting him with the position in front of all of the assembled troops.

During Crawford’s time at the unit, he prepared the battalion for their mission to Afghanistan in support of Operation Enduring Freedom, where he and the 101st STB contributed to the success of Task Force Lifeliner. 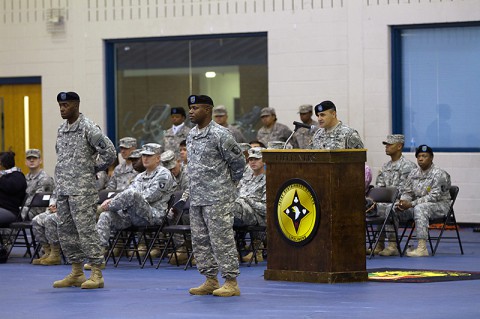 He then aided the commander in resetting the unit and preparing the battalion for a humanitarian mission in West Africa to aid a region stricken by Ebola. Gallegos congratulated him for all of his dedication to the battalion’s Soldiers.

“Throughout his tenure as the battalion command sergeant major, Command Sgt. Maj. Crawford has set a premium on the care of our Soldiers and their families,” said Gallegos. “When faced with the challenge of having to prepare the battalion for a deployment outside the ARFORGEN [Army Force Generation] cycle, in a time and resource constrained environment, Command Sgt. Maj. Crawford kept the focus on Soldiers and families.”

In his next assignment, Crawford will stay at Fort Campbell with the 101st and become the G-4 sergeant major. When it was Crawford’s turn to speak, he reflected on his time with the Sustainers.

“Truly, I find it hard to believe that 22 months of responsibility has come to an end. My time spent as the battalion command sergeant major has had many rewards and challenges,” said Crawford. “During my tenure … we deployed 304 Soldiers downrange in support of Operation Enduring Freedom, and we successfully managed to redeploy 304 Soldiers to home station – to me that’s a successful deployment.” 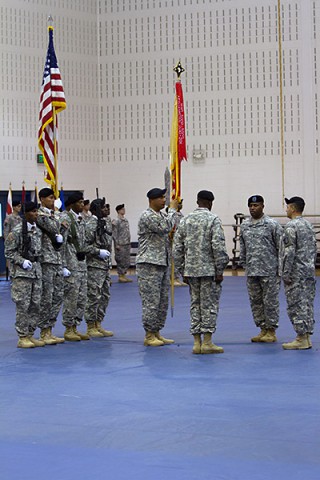 With the transition completed, Gallegos and Crawford welcomed Graham to the battalion.

“As our Army transitions leaders, we always seem to get it right. Command Sgt. Graham is the right leader at the right time,” said Gallegos. “He brings a wealth of experience and proven leadership to this command.”

“I’m confident that the STB is in good hands,” said Crawford.

Graham thanked them and let the Soldiers know he was eager to be part of the battalion.

“I take great pride in joining the 101st Special Troops Battalion, the premier 101st Sustainment Brigade and the 101st Airborne Division,” said Graham. “I am truly proud to be a senior noncommissioned officer in the United States Army.”