Clarksville, TN – Austin Peay men’s basketball will recognize four seniors and one redshirt junior who will be playing their final home game, 7:00pm, Thursday, as the Govs play host to SIU Edwardsville, in a game to be televised by the American Sports Network from the Dunn Center. 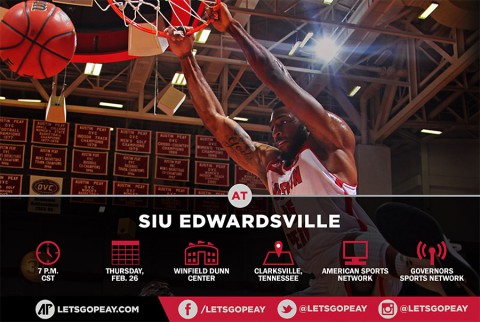 Seniors Chris Freeman, Ed Dyson, Jeremy Purvis and Damarius Smith along with junior Zavion Williams will play their final home games as Governors. The quintet will be honored during a pregame ceremony.

Freeman is the only one to have played all four seasons as a Gov. Williams, meanwhile, is a fourth-year junior who will graduate this spring.

The senior Govs hope to leave the Dunn Center a winner and end the current eight-game losing streak. The Governors are coming off 76-64 road loss at Eastern Kentucky, the defending Ohio Valley Conference champions. The Govs rallied from a double-digit second-half deficit to cut the lead to six with 6:11 left before missing a three pointer.

SIUE having already secured an OVC tourney spot for the second straight year by basically taking care of business at home. The Cougars are 8-7 in league play, going 7-1 at home while being 1-6 on the road. They clinched an OVC berth last weekend, coming from behind at home to beat Southeast Missouri, 75-72, Thursday, and UT Martin, 76-68, Saturday.

Senior guard Kris Davis leads the Cougars, averaging 14.5 points per game, shooting 46 percent from three-point range. He is the only starter averaging in double figures although Rozell Nunn is averaging 10.6 ppg in league play.

The Series: This is the seventh meeting between Austin Peay and SIUE, one of the newer OVC members. APSU trails the series 2-4. The Governors have lost three straight including the January 22nd meeting in Edwardsville by a 69-65 count. Josh Robinson had 17 points in the defeat while Chris Horton had 15 points and 16 rebounds. Kris Davis led all scorers with 18 points while Keaton Jackson had 13 points, seven rebounds and four blocked shots for the Cougars.