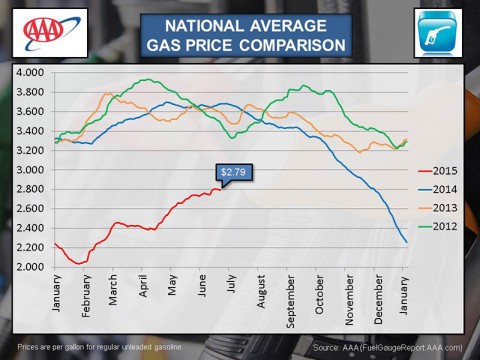 “This is an encouraging sign that gas prices may have finally hit their high-point for the year,” said Mark Jenkins, spokesman, AAA – The Auto Club Group. “The next week will be a strong indicator if prices have finally peaked. Prices should begin moving down as long as there are no major bumps in oil prices.”

The global oil market is currently under downward pressure from a strong U.S. dollar and rising concerns about the potential for a financial crisis in Greece. Euro zone leaders convened on Monday in attempts to address the Greek debt crisis, which could impact the global crude market by causing demand to fall.

The decline in the Euro is also putting additional pressure on the U.S. dollar, making crude more expensive for countries with other currencies. Both items have the potential to reduce demand and place a ceiling on the price of crude.

Additionally, Saudi Arabia is continuing to increase its exports and the market is likely to remain oversupplied in the near term.

AAA updates fuel price averages daily at www.fuelgaugereport.aaa.com . Every day up to 120,000 stations are surveyed based on credit card swipes and direct feeds in cooperation with the Oil Price Information Service (OPIS) and Wright Express for unmatched statistical reliability.