Nashville, TN – After playing the waiting game into the late hours Saturday, Austin Peay State University plans not to let the Ohio Valley Conference tournament opportunity slip from its grasp when it faces Tennessee Tech, 6:00pm, Wednesday, at Municipal Auditorium in the opening game of the men’s portion of the tournament. 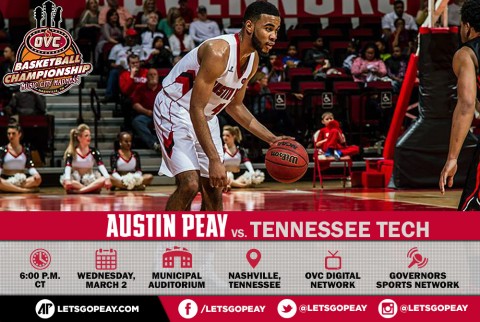 The Governors entered Saturday night needing a win against Southeast Missouri and a loss by Eastern Kentucky (against Tennessee Tech) for APSU to gain the eighth and final OVC tourney spot. They got both.

The Governors rallied down the stretch to beat SEMO, 83-75. Meanwhile, down on the plateau, Tennessee Tech pulled away from Eastern Kentucky for a 92-82 victory.

As a result, the Governors will be making their first trip to Nashville since the 2012 season. And to continue the season they will have to be ready for an offensive-type game against the Golden Eagles. The No. 5 seed averaged 79 points per outing during OVC play this season.

Tennessee Tech is led by first-team All-OVC point guard Torrance Rowe, who averaged 18.1 points, shooting 36 percent from three-point territory, and 4.4 assists per contest. They also received an unexpected lift from 6-9 forward Ryan Martin, who averaging 14 points and 8.1 rebounds per game.

The Golden Eagles are aggressive offensively—not afraid to attack the basket. They are shooting an impressive 74.6 percent, ranking 28th best in the nation.

The two teams played January 9th with the Golden Eagles prevailing 72-66. It was a two-point game with 1:39 left but Martin and guard Aleksa Jugovic got Tech to the finish line. In fact, the Golden Eagles led by three, 69-66, when the latter nailed a long three pointer as the shot clock was beginning to expire.

Horton and Robinson were honored earlier Tuesday by being named first- and second-team All-OVC by the league coaches and sports information directors.

The Govs head to Nashville amidst a modest two-game winning streak. They also go to the Music City basically facing a win-or-else situation in those two contests. That mentality should help the Govs as they prep for the Golden Eagles.

The Governors adjusted their lineup prior to last Thursday’s game at SIUE, moving Robinson to point guard and inserting freshman Jared Savage into the lineup. Savage had 11 points against SIUE, including five key free throws versus the Cougars.

He was one of five Governors in double figures against the Redhawks and the Govs will need that type offensive balance to make a run this week in Nashville Tennessee.