HomeNewsAAA Study shows not all Gasoline is created Equal
News

AAA Study shows not all Gasoline is created Equal

Tampa, FL – Many motorists choose a gas station based on location or price, but a recent AAA study reveals there is a difference in fuel quality depending on where you purchase your gas. 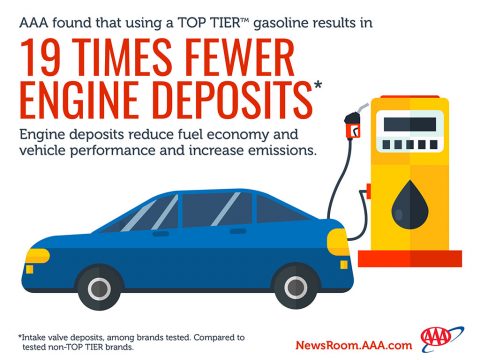 “AAA was surprised to learn the extent to which detergent additives impact gasoline quality,” revealed Kevin Bakewell, Senior Vice President, Chief Public Affairs Officer, AAA – The Auto Club Group. “This study does not suggest that using non-TOP TIER fuel will damage your vehicle. However, results clearly show that engines running on TOP TIER gasoline will operate at their optimal level.”

EPA Mandates a Minimum Level of Detergent in Gasoline
In response to increasing levels of carbon deposits in modern engine designs, the Environmental Protection Agency mandated a minimum level of detergent for all gasoline sold in the United States in 1996.

However, some automakers believe the minimum does not go far enough to ensure optimal vehicle performance and their ability to meet increasingly-stringent fuel economy and emissions requirements. The TOP TIER™ program and performance standard were developed to guarantee that program participants’ gasoline meets stricter targets for engine cleanliness.

AAA Survey Measures Americans Attitudes Toward Gasoline
Despite the fact that two-thirds of U.S. drivers believe there is a difference in quality of gasoline sold by different gas stations, a AAA survey reveals that Americans value convenience and price over quality when it comes to selecting a gas station. 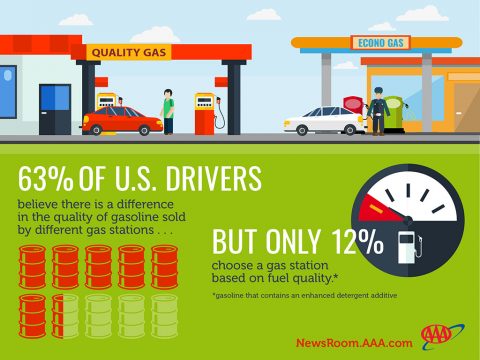 “TOP TIER gasoline is widely available and averages three cents more per gallon than what you might find at a retailer that does not sell this gasoline standard,” continued Bakewell. “Fortunately, consumers can reverse some engine deposits simply by switching gasoline brands. After a few thousand miles with TOP TIER gasoline, performance issues like rough idling or hesitation during acceleration can often be resolved.”

For testing purposes, AAA selected TOP TIER and non-TOP TIER gasolines from a southern Texas market that represents the type of gasoline sold across the majority of the United States. To measure intake valve and combustion chamber deposits, AAA engaged the services of an independent International Standards Organization 17025 certified engine testing lab to perform an American Society for Testing and Materials standard test on fuels.

To evaluate consumer gasoline preferences, AAA contracted with a national research company to perform a telephone survey of 1,002 adults (18 years of age and older) living in the continental United States. Survey results are an accurate representation of the total continental U.S. population, 18 years of age and older, with a margin of error of +/- 3.1 percent at a 95 percent confidence level.