HomeEventsRoxy Regional Theatre to show "The Pirates of Penzance, Jr.", May 26th...
Events

The Roxy Regional School of the Arts presents Gilbert and Sullivan’s swashbuckling musical comedy “The Pirates of Penzance, Jr.” at the Roxy Regional Theatre, May 26th through June 17th.

Frederic is due to be released from his apprenticeship on his 21st birthday, but there’s a snag.

Born on February 29th, Frederic discovers that he is technically still a youngster. Although very much in love, his dedication to duty is unshakeable. Can he find a way to live happily-ever-after with Mabel?

Based on the classic operetta by Sir William Schwenck Gilbert and Sir Arthur Seymour Sullivan, “The Pirates of Penzance, Jr.” has been adapted by the Roxy Regional Theatre and is directed by Ryan Bowie, with choreography by Emily Rourke, music direction by Lacey Connell, technical direction by Samantha Hodson and accompaniment by Matthew McNeill. 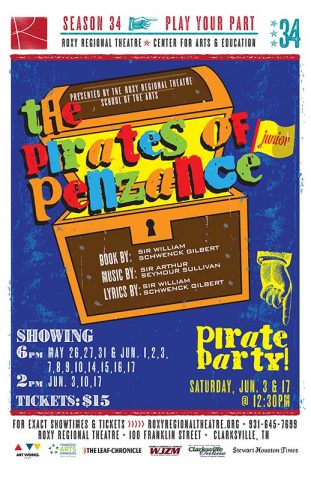 Performances run May 26th through June 17th on Wednesdays, Thursdays, Fridays and Saturdays at 6:00pm, with 2:00pm matinees on June 3rd, 10th and 17th.

Friday, May 26th, is the traditional pay-what-you-can preview of “The Pirates of Penzance, Jr.” All tickets not pre-sold at the regular ticket price will go on sale at 5:30pm that evening for a $5.00 minimum donation.

On Saturday, June 3rd and June 17th, patrons are invited to a “Pirate Party!” before the matinee. The party starts at 12:30pm with lunch across the street at Edward’s Steakhouse (107 Franklin Street), pirate-themed arts and crafts, and photos with the cast. Tickets are $40.00 for the package, which includes the 2:00pm performance of “The Pirates of Penzance, Jr.” All children must be accompanied by a paying adult.

“The Pirates of Penzance, Jr.” is made possible in part through the generous support of Melinda Kelly-Major.

Tickets are $15.00 and may be reserved online at www.roxyregionaltheatre.org, by phone at 931.645.7699, or at the theatre during regular box office hours (9:00am to 2:00pm, Monday through Friday, and one hour prior to curtain). Military, APSU students and CitySaver coupon holders can receive two tickets for the price of one to Wednesday and Thursday performances during the run.

The Roxy Regional Theatre is a 501(c)(3) nonprofit organization dedicated to producing professional live theatre and promoting the arts, with emphasis on education, in Clarksville, Middle Tennessee and the Southeast. The theatre is located at 100 Franklin Street in Historic Downtown Clarksville. For more information, visit www.roxyregionalthreatre.org