“Often times in combat, we have moments of self-reflection,” said Maj. Gen. Andrew P. Poppas, 101st Abn. Div. (AASLT) commanding general. “We have visions of who we are, we have expectations of who we are, but it’s not until that first moment under duress that our strength and character is tested. Through that crucible of fire, we prove who we are. That’s exactly what Staff Sgt. Davis did.”

On June 9th, 2017, Davis was traveling to Georgia when he came across an overturned vehicle. Trusting his gut and noting the lack of concern from other commuters, he pulled over to make sure no one was in danger.

“I was pulling up, and I noticed there was a small engine fire underneath the belly of the car, so I jumped out and ran up to the vehicle,” Davis said.

There he found Rick and Sharon Steiert, trapped and soaked in gasoline from a container that had been thrown from the back of the car, and immediately tried to save them. He pulled Rick from the inverted vehicle first, and then began working to save Sharon, who was still trapped inside by her seatbelt.

“As I was [unbuckling her seatbelt] the whole vehicle caught fire, and I just felt a blanket of fire wrap around my body, and everything just happened in a matter of seconds from there,” Davis explained. “But before I could get the other half of her body out, she caught fire from all the fuel that was on her. I noticed she was on fire [shortly] before noticing that I was on fire too.”

Davis worked quickly to free Sharon from the burning vehicle, then committed his efforts to extinguishing the flames that persisted to burn at their legs.

After emergency personnel transported everyone to Vanderbilt University Medical Center, Davis was diagnosed with severe second degree burns on more than 75 percent of his lower leg, Sharon’s burns were more severe, and Rick also sustained injuries.

“They [doctors] said five seconds longer and I would have been halfway through a third degree burn and almost into the fourth degree,” Davis said. “It was a very painful recovery, but nothing compared to what Sharon had to deal with; so I don’t complain about it.”

After a long recovery process, Davis received a heartfelt letter from Sharon’s daughter, Britney Balduc. In the letter, Balduc expressed her family’s desire to reunite with him.

“It was an emotional letter [sent] from their daughter, because they were burned so badly and unable to write,” said Davis who was also eager to reconnect with the family he helped save.

Davis said that he and the Steiert family have since built a lifelong friendship. Sharon and Rick, along with their son, Scott Capodice, were also in attendance at Shaw Gymnasium and joined Davis and his family as he was honored.

The Soldier’s Medal is a military award that recognizes peacetime acts of valor where a Soldier voluntarily puts himself or herself in personal danger, something that Davis said he did without a second thought that day.

“I did it because that was somebody’s life, and that somebody’s life means something to someone,” Davis said. “I couldn’t imagine if I was in their situation and no one came to help me.”

During the ceremony, Poppas said that Davis serves as an example for all Soldiers to emulate.

“A lesser man, a lesser Soldier, a lesser person, never would have stopped, let alone gone in two separate times and pulled them to safety,” said Poppas. “We’re honoring his acts that are an example for us all. It’s who we should be, no matter what the endeavor, and how we should act when we come across an event like he did.”

Davis, a seven-year combat veteran with deployments to both Iraq and Afghanistan, received praise for his heroism, and his leadership spoke highly of his character.

“He’s just an all-around good Soldier,” said 1st Lt. Charles Trumpfheller, Davis’ platoon leader. “He’ll do anything for anybody and really, he’s one of those [noncommissioned officers] who you can count on to get things done.”

“You’re an inspiration to us all Staff Sgt. Davis,” he said after adorning the Soldier’s Medal onto Davis’ uniform. “Thank you for your actions; we all have something to learn from you.”

A related article is available at the Fort Campbell Courier’s online site, which is at link below. 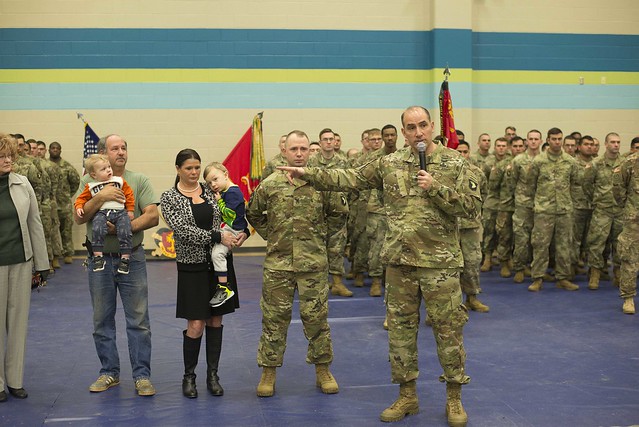