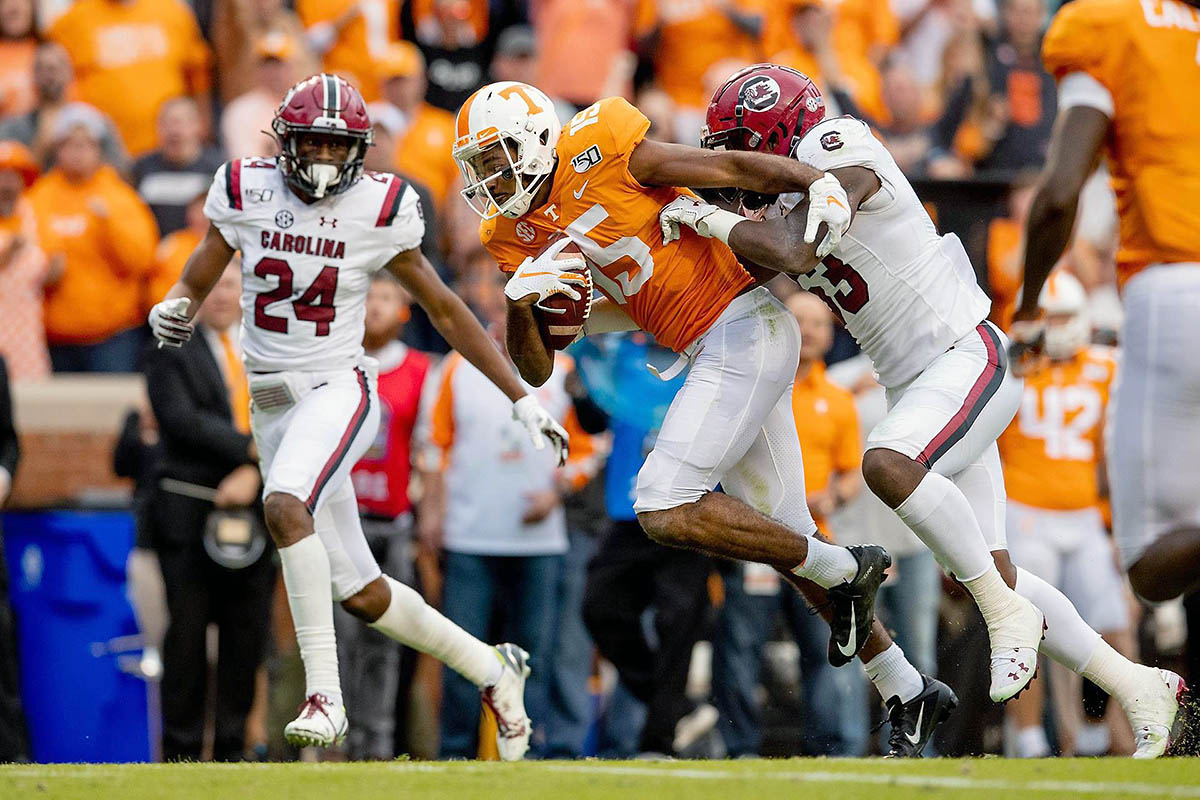 Senior linebacker Daniel Bituli led the defensive effort, tallying a game-high 15 tackles with 11 of them being solo. Bituli also blocked a punt and recovered it in the end zone for a touchdown in the fourth quarter to put the final nail in the coffin.

Fellow senior Darrell Taylor chipped in with two sacks, both coming at critical moments. His performance was the fourth multi-sack game of his career.

South Carolina (3-5, 2-4 SEC) came out of the gates swinging as Tyler Hilinski connected with wide receiver Shi Smith on the game’s first play for a 75-yard touchdown, giving the Gamecocks the early 7-0 advantage.

After the teams traded punts, junior Brent Cimaglia put the Vols on the board with a 46-yard field goal to cut the South Carolina lead to 7-3 with 7:19 remaining in the opening quarter. The make was the 32nd of Cimaglia’s career and briefly placing him atop the all-time field goal percentage list with a mark of 78 percent.

Following a second-straight forced three-and-out by the defense, the Orange & White drove 77 yards in 17 plays to come up just short of crossing the goal line, turning it over on downs at the 1-yard line.

After the offense turned it over, the UT defense continued its dominant first half performance, forcing a third consecutive punt. The series highlight was Taylor’s sack on third down, his fourth of the season and the 14th of his career.

On the ensuing punt, senior receiver Marquez Callaway waltzed 65 yards to the end zone to give UT a 10-7 lead in the middle stages of the second quarter. The return was the third punt return touchdown of his career and his first since Tennessee’s 14-3 victory over Charlotte last season.

Down 10-7, South Carolina drove 44 yards on nine plays before running back Mon Denson punched it into the end zone on fourth-and-goal from the 1-yard line to give the Gamecocks a 14-10 lead.

On the ensuing UT drive, the offense responded immediately, needing just two plays to drive 75 yards. Jennings hauled in catches on both plays, with the second being a 48-yard touchdown catch in which he broke a series of tackles on his way to the checkerboards, giving UT its second three-point advantage of the afternoon at 17-14 with 2:34 remaining in the first half.

In the closing minutes of the half, South Carolina completed an 11-play, 75-yard drive in just 2:24. Running back Tavien Feaster finished the drive with one-yard rush to give the Gamecocks their third lead of the contest at 21-17 as the teams headed to the locker room for halftime.

Out of the break, the Vols opened up the scoring in the second half when junior quarterback Jarrett Guarantano connected with Jennings for a second time, this time a 19-yard touchdown strike that gave the Vols their third lead of the game at 24-21.

The score was Jennings’ second touchdown grab of the evening, marking his second multi-touchdown game of the year. The last time a UT receiver tallied multiple games with multiple touchdowns was when Josh Malone did so in 2016 against Ohio and Tennessee Tech.

Holding a slim 24-21 lead, the Vols broke things open. The defense forced its fourth three-and-out of the afternoon, with South Carolina never crossing the original line of scrimmage. Freshman quarterback J.T. Shrout then tossed his first-career touchdown pass, a 55-yard bomb to Callaway that gave UT a double-digit lead with 5:07 remaining in the third quarter.

The Vols added to their lead at the start of the fourth quarter when Cimaglia nailed his second field goal of the game, this time from 31 yards to increase the UT advantage to 34-21.

UT continued to pour it on as Bituli added to his game-high 15 tackles, blocking a South Carolina punt and recovering the loose ball in the end zone for his second-career touchdown.

The blocked punt increased the Vols lead to 41-21 and marked the first time the Big Orange have scored more than 40 points against a conference opponent since a 63-37 victory over Missouri in 2016.

The defense suffocated the Gamecocks’ offense to close the contest and cement the 41-21 score line.

Next Up For UT Football

The Tennessee Vols football team improves to 3-5 (2-3 SEC) and are set to host UAB next Saturday at 6:00pm CT on ESPNU.