HomeNewsTennessee Unemployment fell in all Counties in November
News

Tennessee Unemployment fell in all Counties in November 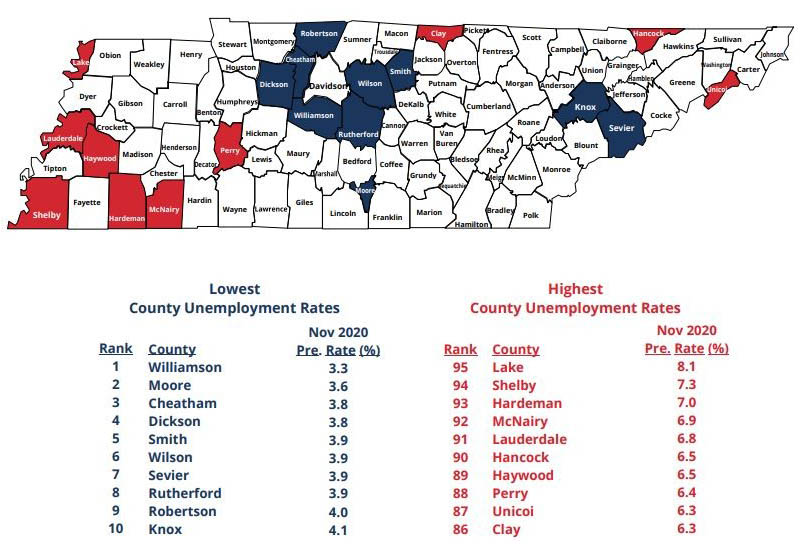 Tennessee Counties Experience Significant Decreases in Unemployment During the Month

Nashville, TN – Each of Tennessee’s 95 counties experienced decreased unemployment in November 2020, according to new data released Thursday by the Tennessee Department of Labor and Workforce Development (TDLWD).

Montgomery County unemployment in November was 5.4 percent, down 2.2 percent from October’s 7.3 percent. 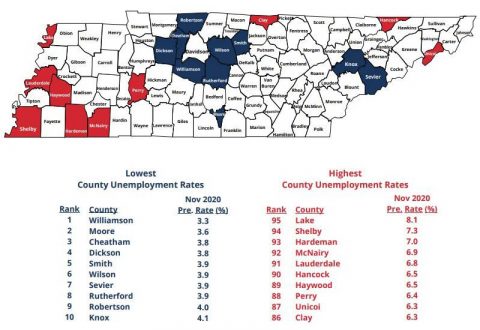 Unemployment rates in 41 counties are now less than 5%. Fifty-four counties recorded rates of 5% or higher during the month.

Williamson County had the lowest unemployment rate. At 3.3%, its November rate dropped by 1.3 percentage points when compared to October. The new rate is just 1 percentage point higher than it was in November 2019.

At 3.6%, Moore County had the state’s second-lowest rate for the month. The new figure is 1 percentage point lower than its October rate of 4.6%.

Lake County recorded the highest jobless rate in November, but it still experienced a significant drop in unemployment. The county’s new rate is 8.1%, down 2 percentage points when compared to October.

Shelby County’s unemployment rate dropped more than any other county in the state. At 7.3%, it has the second-highest rate for the month, but it decreased by 3.7 percentage points when compared to its October rate of 11%.

A complete analysis of November’s unemployment data for each county, including labor force estimates for areas across the state, is available here.

The state offers online options for Tennesseans searching for employment. Currently, on the state’s workforce development website, Jobs4TN.gov, job seekers can find more than 230,000 open positions in a wide range of occupations and skill levels.

TDLWD recently launched the Tennessee Virtual American Job Center (VAJC). The new website located at www.TNVirtualAJC.com allows Tennesseans to research different programs, from different state agencies, that can help them remove barriers to employment so they can more easily reenter Tennessee’s workforce. The VAJC allows job seekers to do this on their schedule, anytime, anywhere.