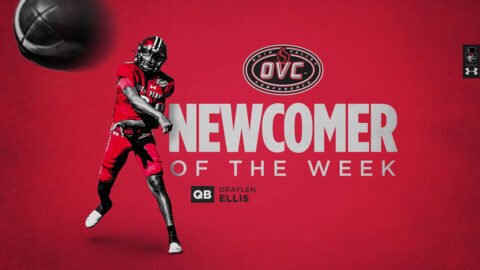 For Ellis, of Olive Branch, Mississippi, it is the fourth time in league’s seven weeks he has been the league’s Newcomer of the Week. In Saturday’s win, he had three touchdowns – throwing for two and running for another – as part of a 21-of-34, 227-yard performance.

With Austin Peay State University trailing for the first time in the game, Ellis led the Govs on an 11-play, 66-yard drive. His 10-yard pass to C.J. Evans with 7:55 left tied the game. After the Austin Peay defense forced a three-and-out, Murray State appeared to pin the Govs on their own four-yard line with 5:33 remaining.

But Ellis led the APSU Govs on a 17-play, 80-yard drive, and his kneel-down at the MSU 16-yard line set up Paulette’s game-winning 33-yard field goal with two seconds remaining.

Paulette, a Lewisville, Texas product, earned the OVC’s Specialist of the Week award for the first time after hitting that 33-yard field goal. He also had a 40-yard field goal to open the day’s scoring and went 4-of-4 on PATs to finish with 10 points in the victory. The two field goals were his first attempts this spring after going 3-for-4 during the fall portion of the schedule.

The honors are the 11th and 12th earned by Austin Peay athletes this spring – out of 20 opportunities.

Austin Peay State University closes out the spring 2021 OVC slate when it travels to Eastern Illinois for a 1:00pm, Sunday contest. With a victory, the APSU Govs would secure a second-place finish in this spring’s race. It would be Austin Peay State University’s first back-to-back top two finishes in OVC play since the 1964-65 seasons – the second and third years after joining the OVC.