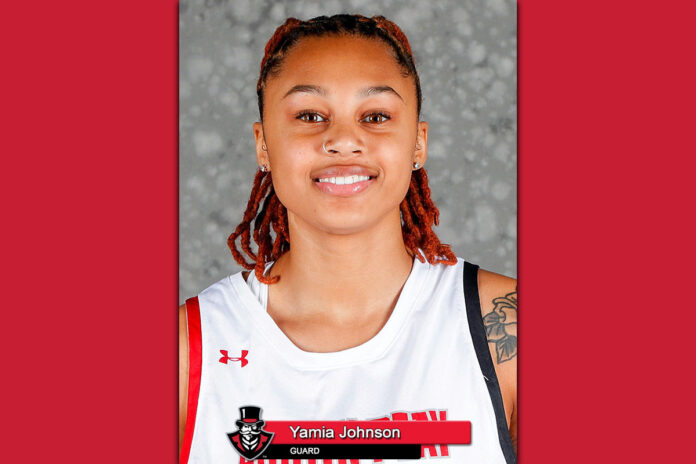 A native of Lexington, South Carolina, Johnson scored 17 points and grabbed six rebounds in a wire-to-wire win against UNC Asheville. Johnson also added an assist, while going 6-of-10 from the floor and 3-of-5 from three-point range against the Bulldogs.

Against Gardner-Webb, Johnson scored a season-high 25 points – her best single-game performance since she scored 25 points against Tennessee Tech in her final game for Jacksonville State. The 5-11 guard also recorded nine rebounds, two assists, two blocked shots, and a steal against the Runnin’ Bulldogs while shooting 9-of-15 from the floor and a perfect 3-for-3 from behind the arc.

Johnson is Austin Peay State University’s leading scorer and ranks third in the OVC this season, averaging 16.3 points per game while coming off the bench in all but one appearance.  Johnson has scored in double-figures in all nine games she has played for the Govs and has a chance to be the first Governor to score in double-figures in ten-straight games since Keisha Gregory did it in 11-consecutive games from January 31st to March 7th in 2019.

Johnson also is averaging 5.8 rebounds per game, which ranks 13th in the OVC, and is shooting 40.7 percent from three-point range, sixth in the league.

Johnson and the rest of the Austin Peay State University women’s basketball team will be back in action at 2:00pm today, December 21st when they host UT Southern to wrap up the nonconference slate.