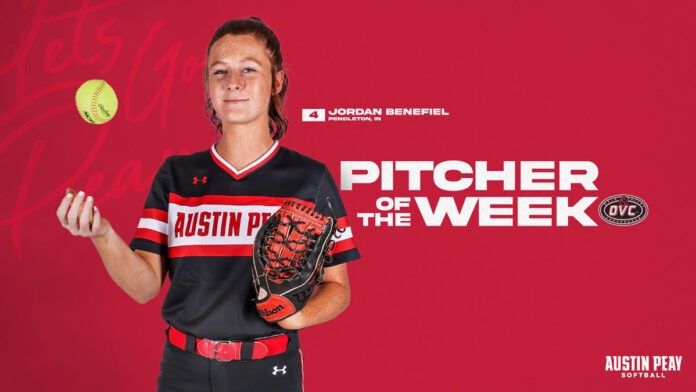 Brentwood, TN – For the first time in 24 years, Austin Peay State University (APSU) had two different softball teammates sweep the Ohio Valley Conference Player and Pitcher of the Week honors, with Kylie Campbell earning OVC Player of the Week and Jordan Benefiel being named OVC Pitcher of the Week.

It is the first weekly conference honor for both players.

It also marks the fifth time since the awards have been given out, starting in the 1994 season, that the Governors have swept the conference’s weekly softball awards. The last two players to do so were Andrea Miller and Angela Thompson accomplishing the feat twice (April 11th, 1994 & April 17th, 1995), Amanda Travis and Amanda Stout, March 16th, 1998, and Kelsey Gross winning both honors, April 12th, 2021.

Campbell, a freshman catcher/utility player from Ninety Six, South Carolina, batted .462 this past weekend for APSU, with a team-leading nine RBI to go with three runs scored and two bases on balls.

Among her six hits, this past weekend were two home runs, including a grand slam against Alabama State, the first bases-loaded home run for the Govs since Danielle Liermann against Southeast Missouri, April 29th, 2016

For Benefiel, the Pendleton, Indiana native went 2-0 this past weekend, with a 0.98 ERA in 21.1 innings of work, including a two-hit shutout of Alabama State on Friday to open the season.