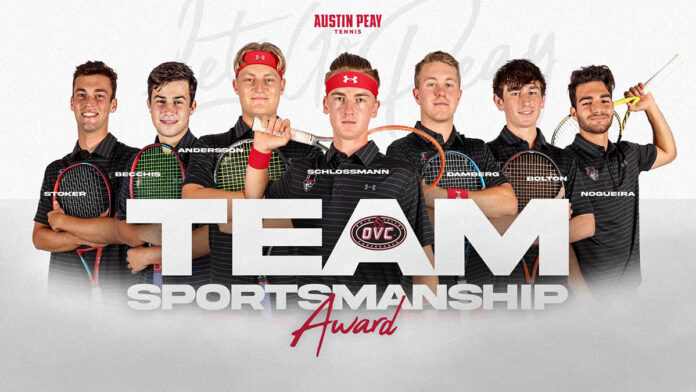 Voted on by the student-athletes and coaches of the respective sports, the team awards are bestowed upon the Conference squads deemed to have best exhibited the standards of sportsmanship and ethical behavior as outlined by the OVC and NCAA. Included in the areas for evaluation are the conduct of student-athletes, coaches, staff and administrators and fans.

Austin Peay State University is the first team to receive the OVC Team Sportsmanship Award in men’s tennis for three-straight seasons in the award’s 16-year history. The Governors won the award in 2021 and 2019, the honor was not given in 2020 due to the COVID-19 Coronavirus pandemic.

APSU Men’s tennis has received the OVC Team Sportsmanship award a conference-best four times, with their first selection being in 2015.

Austin Peay State University Men’s tennis leads the OVC with this year being its fourth overall selection, after first receiving the honor in 2015.

“This award reflects the way our men handle and carries themselves in competition,” said head men’s tennis coach Ross Brown. “They compete hard, are fair, and always treat opponents with respect. I am very pleased and proud of the reputation these men have built in recent years.”