New toy and a shocking discovery

On black Friday, like many other Clarksvillians, I was out and about very early. At exactly 5am I was pulling into the filled to capacity parking lot in front of Best Buy. I was there to check out some of the holiday sales.

I found a nice camera in my low price range. A Panasonic Lumix model DMC-LZ3 for $149.00. I saved roughly $30.00 on the camera which by it’s self wouldn’t have encourage me to buy that day. But Best Buy also had the SD memory cards on sale. I was able to find a 2 gig memory card for the camera for only $29, a savings of $50.00 or more. Not wanting to endure the huge line I returned the camera with plans to return in the afternoon to pick it up.

I left, and went and ate breakfast. After breakfast fearing that the camera, or memory would be out of stock by the afternoon, I returned to Best Buy. It seemed as if the checkout line hadn’t gotten any smaller during the roughly 2 hours I was gone. So resigning myself to a very long boring wait in line, I went and tracked down the end of the line. At that time the end line happened to be near two hidden cash registers which had a much shorter line. So I asked the shop clerk there if they could process credit card transactions and she said yes. That was enough for me, so I hurried over and got in that line.

About 20 minutes later I was walking out of the store with my purchases. Having the camera I had it pulled out of the package and taking pictures of people hurrying to find their own deals while I was waiting in the insane traffic flow trying to get out of the parking lot.

I have been needing a camera. Ever since I founded this web site the one thing that has been missing is photographs accompanying stories about local issues and events. The reason was simple. I did not own a camera to take the photographs with. Relying on others to attend the events, take the pictures, and upload the stories just was not working out. It goes back to the old adage if you want something done you’ve gotta do it your self.

I have spent the next three days playing with the camera. Saturday at Dunbar cave taking pictures of the scenery and people enjoying the unseasonablely warm eather. Sunday went to take pictures of other local landmarks such as the Customs House Museum, the Montgomery County Court House, and the L&N train station.

I was shocked when I arrived at the last location to take photographs of one of the premier local attractions and found that the train was in a deplorable state with graffiti, broken windows, and a general condition of decay on both the train and the caboose. Needless to say, I left without taking any photographs, though I did go back later.

Clarksville has a graffiti problem and it’s only going to get worse. So we must do something about it while it is still at a manageable level.

People might say it’s just kids being kids. But it’s more than that. It’s the image that we as a community project to ourselves and the world at large. If this place we call a tourist attraction is in this state, why then bother visiting anything else in our city.

The problem is growing, I am sure that we all remember when a local churches was tagged by someone who spray painted vulgar and hateful words on the front of the Church. This just makes my point clear, we must take steps now not later.

Clarksville needs to put in place a 0 tolerance policy on graffiti. If you are caught tagging not only should you be fined; pay to repair any damage done; ordered to do community service, including the removal of graffiti; but they should also receive mandatory jail time.

Both the Locomotive and Caboose at the L&N train station need a fresh paint job, and then be restored to a pristine state, outside and in. I would also recommend the city consider installing video surveillance cameras to be able to cover both the sides of the train, and the station.

We want our city to be attractive to tourists, well this is a very important step towards it becoming so. You should contact your representative in the city council and request that they do whatever they can to assist in beginning to implement these strong but necessary measures.

The only thing I can agree with about this whole situation at the train station is that yes indeed grafitti does blow. 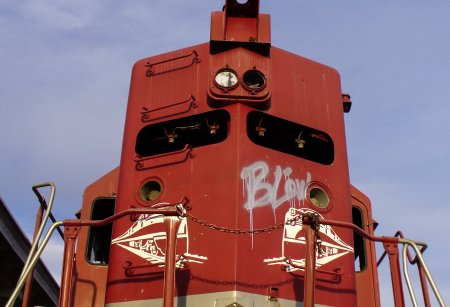