Queue up for romance. Yes, sappy, sentimental, romantic. Loves stories. Guys, if you don’t want to watch us cry (for love or loss), snivel and reach for Kleenex all night long, you might want to head back to the Cineplex this weekend. 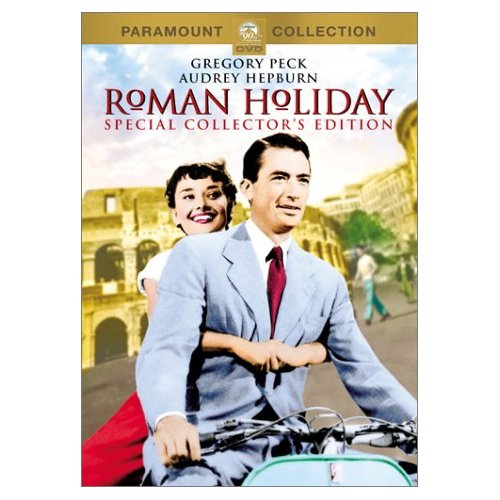 I’m starting with Roman Holiday: Audrey Hepburn (her first starring role) and Gregory Peck co-star in this Roman romp as an enchanting runaway princess and a struggling reporter steal a day together and fall in love. Apart from the typical touristy Roman landscape, there’s a hint of subterfuge, a case of hidden identities and agendas that tease and taunt. But class, power and personal responsibility temper what should have been, and the ending is bittersweet. Director William Wyler used a lighter hand here and his touch was impeccable. Beautiful locations. And that Hepburn fashion designed by Edith Head … How can you not love this picture? (1953)

Rome Adventure. Because Rome (here we go again) is gorgeous. Susan Pleshette is beautiful and has a sexy voice. Troy Donahue (at that time of my life) could have come home with me anytime. And Emelio Pericoli can sing Al-Di-La (which I memorized in Italian after I saw the film the first time) whenever he pleases. Preferably all the time. Even today. So what if it’s a Harlequin Romance on steroids. It still gets me every time. Susan Pleshette is Prudence, a teacher turned librarian who sails for Italy, opting to work in a bookstore there. She meets and falls in love with Don, touring Italy with him. With Angie Dickinson and Rossano Brazzi rounding out the cast, and that blessed candalabara … (1962).

Three Coins in the Fountain: Back to Italy for still more romance (who says Paris dominates this genre?) American girls — Anita and Maria — head to Rome in search of jobs and romance. Tossing coins in the fabled Fountain of Trevi, they wish for love. Maria meets a prince who squires her around Europe. Frances, who has worked in Rome for 15 years, finally catches the eye of her writer/boss. Anita wins the heart of a gorgeous law student (Rosanno Brazzi). Early cinemascope did more than justice to the Italian landscape and the sights and sounds of Rome. The theme song became a classic. (1954).

How to Steal a Million: Finally, Paris. Slick and polished and highly underrated, this film offers Peter O’Toole is Simon, a “society burglar” hired by Audrey Hepburn (as Nicole) to steal back a fake Celini statue her art forger father has sold to a Paris museum. It’s a romp, a lighthearted romantic comedy skillfully presented by tow of the “beautiful people” of the 60s. I spent years copying Miss Hepburn’s Givenchy wardrobe when I was young as as skinny as she. (1966)

A Summer Place: Two generations falling in love, with dire consequences for both. This was Troy Donahue’s first starring role, played out against the backdrop of the Maine coastline. Co-starring Richard Egan and Dorothy MaGuire. The song “Theme from A Place” was a top musical choice when the movie was released — (1959)

Sabrina: Two wealthy brothers with very different takes on life — Linus is the corporate workaholic and sustainer of family fortune; David is the lightweight playboy always looking for the next conquest. Enter Sabrina (Audrey Hepburn), the chauffeur’s daughter, forever in love with playboy (William Holden) and unconcerned with Linus (Humphrey Bogart) who is slowly falling in love with her. The gawky girl heads to Paris and culinary school, returning as a cultured and sophisticated lady with men falling at her feet. Will she win David? Or does fate have something else in mind? (1954)

Love is a Many Splendored Thing: “Once on a high and windy hill — two lovers kissed and the world stood still …” so goes the title song for this love story based in Hong Kong in the Korean War years. An Asian/American doctor and an American war correspondent are caught up in the culture and controversy of interracial relations, falling in love amidst the horrors of war. (1955)

Parrish: Set in tobacco growing Connecticut River Valley, it’s the story of Parrish McLean (Troy Donahue), who lives with his mother on Sala Post’s plantation. Parrish’s mother marries a rival grower, but Parrish stays with Sala, learning the tobacco business from the ground up. The book is every bit as good as the movie. (1961)

Other fabulous love stories include the following (from a slightly older time period):

The Ghost and Mrs. Muir: Gene Tierney is the impoverished widow who settles into a haunted house by the sea. Rex Harrison is the ghost, gruff and grumbling and grudgingly accepting the human occupation of his seaside house. This is classic haunting and classic fantasy — and a damned good love story that spans that mystery of time and place. (1947)

Rebecca: based on Daphne Du Maurier’s classic novel of the wealthy widow, the young woman he marries, and the mystery surrounding the mansion called Manderly. Love, hate, family secrets, and maybe a crime entwine the characters in this gothic tale. (1940)

Now Voyager: Bette Davis is Charlotte vale, a frumpy rich girl dominated by a cruel and abusive mother. Committed to an institution, she emerges as a new woman, confident, capable and about to fall in love. With a married man (Jerry, played by Paul Heinreid.). With a troubled daughter not too unlike what Charlotte herself had been. It offers the classic line: Don’t ask for the moon … we have the stars…” (1942)

Laura: The glamourous and mysterious Laura (Gene Tierney) is believe murdered, but it’s a case of mistaken identity. Detective Mark McPherson (Dana Andrews) investigates. Of course there love, and jealously, and a lot of high society. (1944)

Okay guys, you can come back now.

From now through Labor Day, Drive-In Saturday Night offers movie options listed on Fridays so you’ll have time to browse, rent or buy some weekend films. Popcorn. And, at least for this weekend, a large box of tissues.