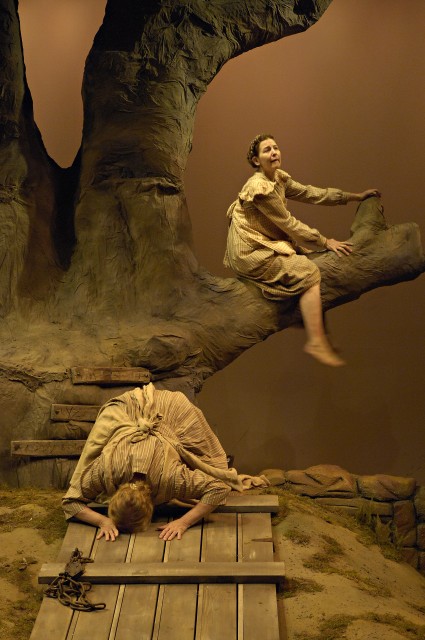 In a lesser known part of American history, in the southwestern Utah landscape of 150 years ago, tragedy unfolded supposedly at the hands of a Mormon militia. The Mountain Meadows Massacre of 1857 occurred when a group of at least 130 Arkansas pioneers — men, women and children — were slaughtered by raiders supposedly with ties to the Mormon Church, a link still debated to this day. The raiders were laboring under the misconception that these new settlers were somehow linked to the persecution of Latter Day Saints in the Midwest years before.

While On The Road In America this summer, I was gifted with the opportunity to see a new Berkshire Theater Festival production, Two-Headed, which has its roots in this historical tragedy. Then I stumbled upon an upcoming film, September Dawn, a Hollywood version that specifically chronicles the massacre with the usual fantasized story lines that will attempt to make the characters real when it hits the silver screen in about a month.

In the movie version of this tragedy, John Voight stars as a Mormon elder with two sons on opposite sides of the issues of faith and free will: follow doctrine, or follow one’s own spiritual beliefs. To kill or not to kill. And to love, even if one’s love stands on the other side of your theology. Terrence Stamp is featured as Mormon leader Brigham Young in this retelling of murders with religious ties. 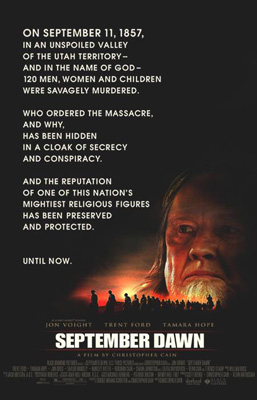 The film has sparked rebuttal from Latter Day Saints, and controversy as the horrors of another time and place spill into today’s headlines, rekindling debate and triggering strong statements from Mormon leaders decrying the murderous attribution and citing the honor and atonements offered to the dead over the ensuing one and a half centuries. In 1999, The LDS dedicated a memorial on the massacre site.

But even as Hollywood is scrambling toward the release of September Dawn, a little theater in the Berkshire hills of Western Massachusetts was telling the same story from a smaller, humbler perspective in the striking Julie Hensen play, Two-Headed.

At the BTF’s Unicorn Theater, Corinna May played the headstrong Lavinia, wild and unruly, mocking the Mormon that surround her. Diane Prusha was her counterpart, Hettie, quiet, malleable, unquestioning, blind follower of her faith. They hate each other, as least as much as ten-year-olds can, and that’s the age at which we meet them. Lavinia is horrified by her father’s participation in the massacre, and Hettie sees the killing a justifiable “revenge” for past sins against her Mormon people.

So begins a journey through five decades (five scenes) of their lives, tangled years in which words, movement, action, faith and architecture juxtapose with history, memory and the constricting structure of their lives. The wiry Lavinia plays against the slow, ambling Hettie. We watch them grow; we watch history erode their spirit. We watch the plurality of marriage undermine their tenuous friendship when Hettie marries Lavinia’s father, and then 20 years later takes Hettie’s daughter as a second wife, bringing the two women into and “equal” but divisive bond. In this society of plural marriage, men rule and control, leaving these dissimilar women with only each other for company and a sustenance that is ever more difficult to cling to. 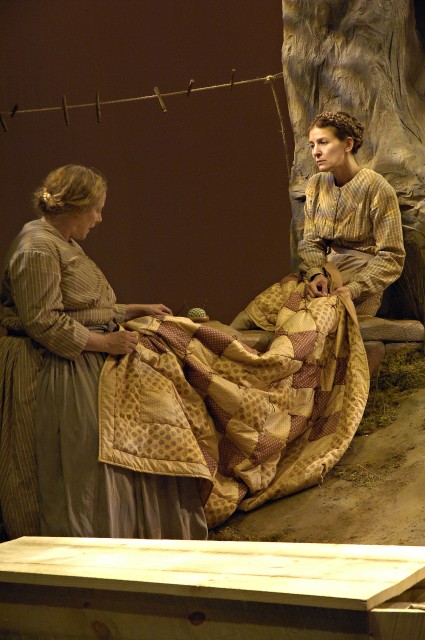 Apart from the stunning performances, I found the spectacular set design of the play — a huge tree, with sprawling roots growing deep into the earth — most impressive. This monumental anchoring tree overshadows a “root cellar: the former with widespread branches reaching upward and out, the latter a deep dark place of secrets and shadows and hidden things. Natural representations as intertwined as the lives of the women in shade and shadows. Both women are dressed in earth-toned clothing, melting into the patriarchal landscape they inhabit, chained to each other by a quirk of history and circumstance.

Through their eyes, and their lives, we are given a window into Mormonism in the words of a playwright who is descended from participants in the massacre. Two-Headed is a stunning and provocative production that would be amazing repertory for any growing theater in the country to produce — including our own Roxy theater.

As for the truth behind the stories, speculation rules.

“The complete — the absolute — truth of the affair can probably never be evaluated by any human being; attempts to understand the forces which culminated in it an those which were set into motion by it are all very inadequate at best.”

What is known about the Mountain Meadows Massacre is that these settlers were attacked over a period of many days, either by Paiute Indians, possibly a mix of Mormons and Paiutes, or Mormons disguised as Native Americans. The innocents were slaughtered while under a flag of truce, though children under age 10 were spared and adopted by Mormon families until federal troops recovered them and brought them to what was left of their families in the east.

The film version, September Dawn was drawn in part from the confession of John Lee, a lieutenant of Brigham Young. Lee was the sole person prosecuted for the massacre, and was executed by firing squad while claiming to the end that he was the public sacrifice on the altar of other people’s sins.

September Dawn, in keeping with the graphic styles of today’s filmmakers, will offer extremely specific views of what the massacre was, tangling its horrors with love stories and vignettes and oratory of the people on both sides of disaster. Two-Headed has subtler inclinations, looking at the massacre through the eyes of two of its survivors and fifty years of the lives lived in the shadow of death. September Dawn will be widely screened; Productions of Two-Headed will be much harder to find, but worth looking for.
Berkshire Theater Festival photos by Kevin Sprague.