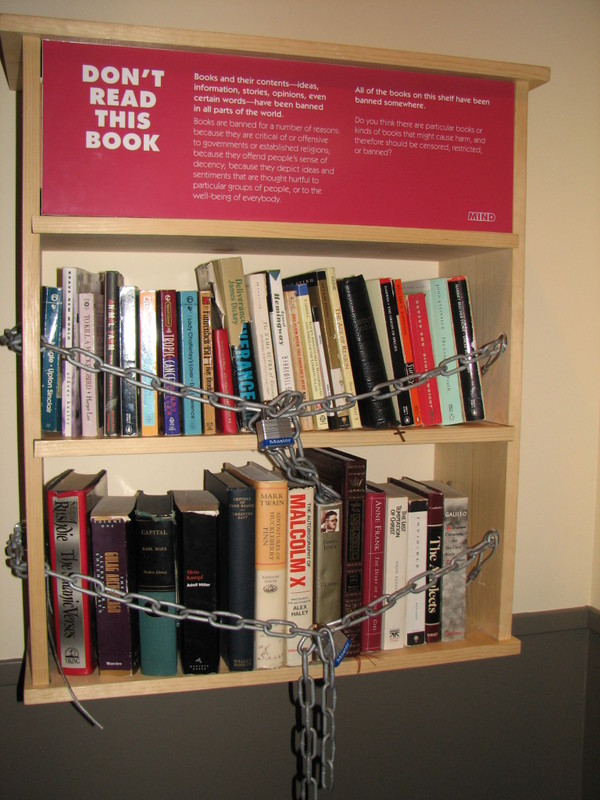 While America Sleeps is “an occasional column” and commentary on the state of Civil Liberties in America.

I ‘ve been following the saga of the removal, regulation and control of access to books by people in prison. Religiously oriented books in particular.

I read with great interest a New York Times commentary by Laurie Goodstein on the systematic purging of books on faith from prison bookshelves by chaplains under the Standardized Chapel Library Project. Those same chaplains are now being asked to review tome by tome any and every requested book before it “might” be returned to the shelves for access by inmates. As if chaplains have nothing else to do but serve as literary screeners (a.k.a. censors) for the prison system.

According to Goodstein, Bureau of Prisons spokeswoman Traci Billingsley said her agency was responding to a 2004 report by the Office of the Inspector General in the Justice Department that recommended a course of action for prisons to keep them from becoming:

“… recruiting grounds for militant Islamic and other religious groups. The bureau, an agency of the Justice Department, defended its effort, which it calls the Standardized Chapel Library Project, as a way of barring access to materials that could, in its words, “discriminate, disparage, advocate violence or radicalize.

The banned books ripped from prison libraries included nine works by acclaimed author C.S. Lewis, creator of the Chronicles of Narnia series, an array of Islamic and other non-Christian texts, a high number of Jewish faith-based texts, but none by theologian Reinhold Niebuhr, Catholic Cardinal Avery Dulles, or the influential Pastor Robert H. Schuller.

Prison chaplains routinely review incoming texts for violence but have questioned both the extensive removal of religiously-oriented books that has left many bookshelves almost bare. Chaplains have been burdened with the complex and time-consuming task of reading and reviewing requested books prior to making them available to prisoners.

“There’s no need to get rid of literally hundreds of thousands of books that are fine simply because you have a problem with an isolated book or piece of literature that presents extremism.”

The government maintained that the new rules don’t entirely clear the shelves of prison chapel libraries, and a U.S. Attorney Brian Feldman told U.S. District Court Laura Taylor Swain that prison libraries limited the number of book for each religion under the new rules, and that officials would could increase the numbers “after choosing a new list of permitted books.” (USA Today/AP)

The target in this post 9-11 mindset is obviously Islamic-oriented studies and potential links to terrorism, as admitted by Ms. Billingsley. But how long will it be before this extremist action that violates the freedom of religion, the right to pursue religious study regardless of denomination is vectored into other venues: our libraries, our schools?

This action is not just about books in prisons with captive audiences. It’s much bigger than that.

This purge of the tools of knowledge recalls the outrage that erupted several years ago when our government walked over the Bill of Rights in its attempt to access and track records of the library books we read. Librarians were irate, the half of America that stayed awake was outraged, and the half of America still asleep didn’t seem to know or care. All it did for me was make me immediately find the most outrageous books on the shelves and check them out. This kind of intrusive monitoring is a precursor to expansive censorship and worse, and leaves us no better off than the countries we criticize for their lack of “democracy” and democratic principles.

I view the Chapel Library Project (the prison book bill, as I call it) as another example of our government’s “guerrilla warfare” on the Bill of Rights.

As for me, if someone or some agency bans a book, I will go out of my way to read it just to find out what it is they don’t want me to know. I might not have been interested in it before, but they have now peaked my curiosity. Hey, you three-letter agency guys and gals: there’s a lesson in there — the same one Congress got a dose of by censuring MoveOn.Org last week.

Lessons to be learned …

In the famous H.G. Wells novel, The Time Machine, his Time Traveler whirls into a future in which the surface dwellers have devolved into a simple, illiterate people, the Eloi, with a sub culture of Morlocks who control, prey upon and cannibalize them. No rights or liberties. Just a nurtured existence at the whim and convenience of the powerful. It was allowed to happen to the extreme, over time, by those who did not pay attention. Predator and Prey.

“The Utopian existence of the Eloi turns out to be deceptive. The Traveler soon discovers that the class structure of his own time has in fact persisted, and the human race has diverged into two branches. The wealthy, leisure classes appear to have devolved into the ineffectual, not very bright Eloi he has already seen; but the down-trodden working classes have evolved into the bestial Morlocks, cannibal hominids resembling human spiders, who toil underground maintaining the machinery that keep the Eloi – their flocks – docile and plentiful. Both species, having adapted to their routines, are of distinctly sub-human intelligence.”

In the film version, Wells’ Time Traveler (Rod Taylor, right, in the 1960 film version) is confronted with the absence of information: no media, no awareness, just shelves of books that crumble to the touch and an odd holographic record of the decline of intellectual civilization. The Time Traveler returns home, collects a few items, including three books, and returns to this horrifying future with the implication of effecting change. Which books did he bring? Which would you choose for such a journey? Will they still be around when you need them? 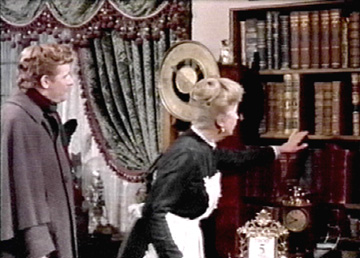 Examining the once tightly packed shelf, the Time Traveler’s friends try to learn which books journeyed into the future.

For those interested in the issue of censorship and the banning of books, Austin Peay State University is among 87 U.S. and Canadian locations that will screen the documentary, The Hollywood Librarian: A Look at Librarians Through Film. The film can be seen on Sunday, September 30, at 6 p.m. and Monday, October 1, at 4 p.m. at the Morgan University Center (Room 303). The screening coincides with the celebration of Banned Books Week and include scenes of the 1930s burning of John Steinbeck’s books, discussion of the Patriot Act and an interview with acclaimed author Ray Bradbury.