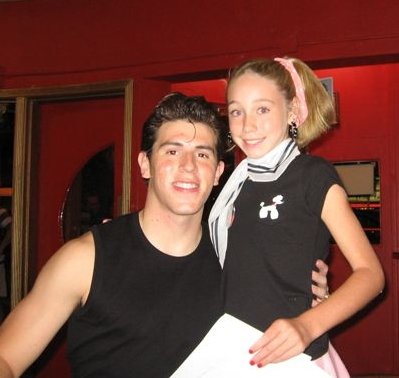 It’s a step back in time, a rollicking romp to those rock-and-roll heydays otherwise known as the 50s for those who opt to see the Roxy Theater’s 2007-08 season opener, Grease.

Matt Nolen (left, seen here post-show with Grease enthusiast Miranda Sizemore), from television’s You’re the One That I Want, won the role of Danny Zucco, tough-talking, leather jacketed hot-rodder with a not-so-secret crush on sweet-young-thing Sandy (with the Sandra Dee shoulder length hair and the virginity too).

From the ducktailed, slicked back hair to the twisted lock hanging over his forehead, Nolen swaggered his way through the show in perfect Zucco style, never missing a beat in move or facial expression as the braggart trying to impress his buddies with a summer conquest, in the delighted but unexpected encounter with Sandy on that famed first day at school, and in a hilarious “accident” at the drive in — all eyes kept returning to him, the perfect casting choice. Did I mention his strong voice?

Erin Evers is the naive Sandy Dumbrowski, ever innocent, butt of the bad girl’s jokes, the Sandra Dee sweetheart type out of her league in the world of Rydell High’s Pink Ladies and the T-Birds.

Nikki Ferry nails the role of Rizzo — from the costumes to the arrogance and swagger of her character, to the soft heart it masks, when Ferry is on stage, the spotlight seems to seek her out — justifiably.

This version of Grease came complete with Greased Lightnin’ — the flame red convertible that is the T-Birds’ pride and joy — once they’ve finished rebuilding it.

Ryan Flanigan does double duty as both the Hand-Jive‘n Johnny Casino and the Teen Angel in Beauty School Drop-Out, sung by Jenna Spitale with a leggy Ziegfeld style number in silver lame and hair-roller headpieces.

The songs are familiar: Summer Nights belted out with a hard doo-wop edge by the entire company; Kenickie and the T-Birds’ Greased Lightnin’ with its hip swaggering beat; the wistfulness of Sandy as sung by Nolen; an energetic all-cast We Go Together, and a powerhouse rendition of There are Worse Things by Nikki Ferry as Rizzo.

Grease is a high energy hit, a show with lots of footwork, strong rhythms and songs familiar to most of us from prior exposure to the stage show of the classic film with John Travolta and Olivia Newton John. 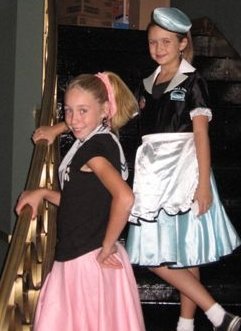 In fact this was a vocally strong cast, each member lending the right edge — humor, pathos, whimsy — to their solo spots — and this show manages to showcases virtually every performer in one or another of its songs.

It’s not just the cast that prances about in costume; Grease fans opted to share the festivities by attending in costume: poodle skirts, bobby-sox and all. Pictured at right, Grease afficionados Miranda Sizemore (l) and friend Shelby Bagwell (r) waited for post-show pictures and autographs with Nolen.

The show is sold out through its Oct. 6 finale.With good reason. It is a performance rooted in just plain fun!

The Picture of Dorian Gray is the next show in the Roxy line-up, and will play Oct. 12 through 27. For ticket information, call the Roxy at 931-645-7699 M-F from 9 a.m. to noon or visit their website at www.roxyregionaltheater.org

Photos of Matt Nolen and his fans by Debbie Boen; cast photo by Greg Williamson.