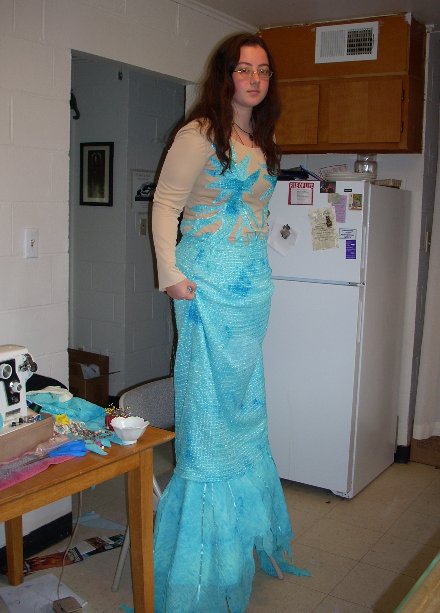 I was ten when I first picked up a needle and thread; 10 and 1/4 when my first teacher clarified the difference between cutting and stitching lines on a pattern, helped me thread a vintage portable sewing machine, helped me make those first forays in the realms of sewing and design.

Forty-seven years later I am still at it, but as a grandma with a mission. That mission has become costuming.

My family, first and foremost, are die-hard sci-fi buffs who regularly attend sci-fi “cons” (conventions) such as Mid South Con in Memphis every spring. Rochelle (top right) and Brandi (below left) haven’t missed a convention – with costumes – in years.

I’d done costumes and clothing for years — even did a man’s suit once. Beaded a bridal gown and created a head piece and veil. I made my own wedding gown and those of my attendants, Christening dresses from antique linen and lace, and most of the gowns for my daughter’s wedding too. I made a life-sized Hobby Holly rag doll and a matching outfit for my daughter when she was four. 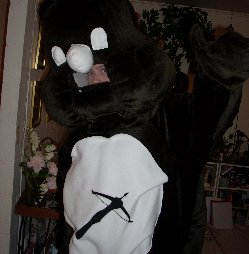 But when my family discovered sci-fi and fantasy, my first quick, down and dirty job was a fast stitching of a floor-length hooded cape, soon to be followed by assorted medieval gowns, more capes, and all the costumes for my daughter’s Renaissance-style 15th wedding anniversary. But the grandchildren are ever more creative, and this year’s projects tops the list of challenges in my life.

Have you ever made a Care Bear costume for a 5’10” granddaughter? Or a petite Mermaid dress with a long wiggly tail?

It seems that my Rochelle, a high school senior, was the only one of four friends who lived up to a freshman deal of being Care Bears for Halloween. Rochelle made good on her end of the bargain, and, after striking a deal with me, proceeded to design a styrofoam “head” for the bear. Six yards of 60″ wide black fur later, grandma was on a roll. For this was not pastel cherub-by Care Bear; this would be a Poison Arrow Bear, a warrior type complete with a crossbow airbrushed onto a pristine white fleece “belly.” Rochelle has a track record of standing up for her rights, and speaking the unvarnished, unedited truth, so the “warrior” style suited her.

More quietly, Brandi, an APSU freshman, asked me if I could make her a mermaid. Ah. Silky fabrics. Romantic styling. Absolutely, I said. We headed out to find the perfect fish scale fabric, and something that would make the dramatic inspiration “tail-fin” from the internet a reality. Enter four yards of sparkly, fuzzy, multi-dimensional turquoise chiffon and its coordinating non-fuzzy sheers that rippled like water. Yards of ribbon. A ‘nude’ sports knit for the bodice because sheer was NOT an option. And we had to make the tail flutter.

Never let it be said that I am daunted by challenge.

I started with Rochelle, and what seemed like miles of fur covering my living room floor. That was in September. With every cut, wisps of fuzz floated to the ceiling and drifted on the breeze of the A/C vents. Fuzz EVERYWHERE. In the sink, inside and outside the machine, on the furniture, even sticking with static to the walls — and the fur itself was a “bear” to cut. My hands hurt, and I did it in sections, by days. I lived with fur. And as long as the girls helped me get up off the floor (bad back and hip) after the cutting, and let me rest and keep my leg elevated regularly, I was good to go.

In the corner stood the stark white box-like shape that would become the head, the sneakers that would become furry feet — you get the idea. I made the bear paws in the shape of mittens, glued fur to the ancient, worn out shoes, and stitched a pillowcase inside the bear butt to hold the pillow that would make this bear true to its pre-hibernation lineage, because tall, lithe, limber Rochelle is just not of bear-ish proportions. That rotund bear-shape requires a puffy pillow or two.

We pieced together ideas for shaping the head, making those big fat roly-poly bear cheeks (the facial ones), and creating a screened window from which she could see through layers of silk illusion netting. One piece at a time, the costume evolved and the smile on Rochelle’s face grew wider. The ears were shaped, stuffed, stitched into the seams. The rounded head was filled with batting. Then it was onto the puffed fur pockets to be stuffed to the right level of roundness to shape the face. the cheeks. Put it on, take it off, fit this, pin that, where’s the glue — piece by puzzle piece the bear was born. And Rochelle, a born “ham,” wanted pictures of its development, a record of this bear-in-progress.

Though I did use a few pieces of a commercial pattern for Rochelle’s bodysuit, Brandi’s costume was patternless, just a series of measurements and my accrued knowledge of what shapes and forms were needed to make it happen. We did the lined skirt first, keeping it narrow enough to mimic the shaping of the mermaid. 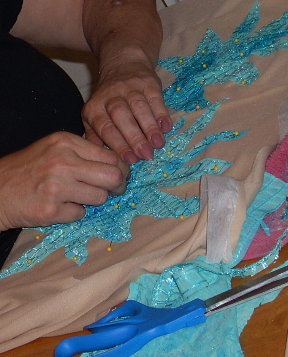 I measured and cut the shape of the bodice and began working on the applique, a labor intensive project of piecing the right shapes in the right hues to make a design Brandi would approve of. I added sparkly threads and wispy chiffon clippings to the debris wafting around my house. And lots of loose threads and snippets of ribbon.

The tail was the tough part; Brandi found a picture of the perfect tail, which worked if the wearer remained reclined and immobile. Not happening. After three days of desperate calculations, the light bulb in my brain flashed and the tail was born: two semi-circles with a pointed hem, a series of ribbons partially stitched with the rest left loose, and a series of petal-like cuts (no second chances here) to make the “fluttery effect” so highly desired. 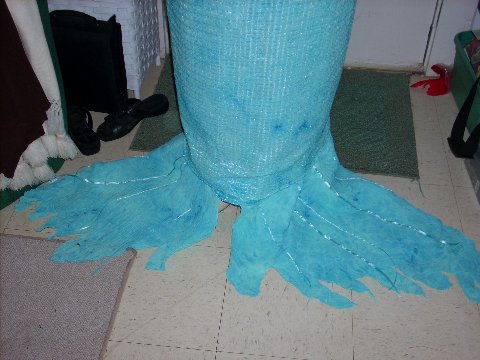 At one point Brandi said the tail “wasn’t working for her” but the cuts and the finishing have changed that. Fishing line attached between sea shells bracelets and a point on each side of the tail allow her to lift it when walks, and long sleeves in that nude shade of jersey will keep her warm on a cool Halloween night.

The bear costume went home early last week; the mermaid a few days later. Both party animals will be celebrating at home in the company of equally creative cluster of friends. And they’ll be gathering again on Halloween, in costume, to take younger siblings and friends out Trick or Treating.

The design and construction of the costumes, the masquerade ball gowns, the pirate costumes and the renaissance fantasy gowns is not just something I do to help, of simply for enjoyment. It’s a process of connectedness with my family; we have to take the time to talk to each other, share ideas, make plans, and follow up on every step. Along the way we talk, laugh, listen to a movie of music, cook together, share meals, and clean up from both the craft and the culinary arts.

In past seasons, I’ve created a half-dozen pirate costumes, and two of the five costumes for the cast of characters in The Wizard of Oz — turning Rochelle into the perfect Dorothy with a basket, Toto, and sparkling red shoes made with spray on glue and tube after tube of red glitter. and creating a Tin Man costume from silver oilcloth, an auto parts funnel and silver spray paint (pictures below).

Sometimes I sew and they cook; most of the time the nourishment that sustains our bodies is something we do together — we also come from a long of cooks, and the girls can a wield a chopping knife with the best. Again, it’s time to talk with each other and listen, sometimes about the big issues in their lives, other times about the little things, the minutia of days that is no less important.

And in that chatter we get to know each other a little better and are the richer for it.

With Halloween 2007 about to pass, both girls hope to sport these costumes at the March 2008 Mid South Con. There, in addition to the wonderful annual adventure with friends, family and fantasy, and for the walloping sum of $35 each, guests get two venues of unlimited ’round the clock sci-fi movies and anime, assorted gaming (not gambling, but strategy games), art shows and auction, workshops and panels with sci-fi authors and filmakers, small group breakfasts with authors, a dance, costume contests and more. Toss in another $50 for a weekend of unlimited beverages and snacks.

I’m hoping to find the time to make my own costume for that event. 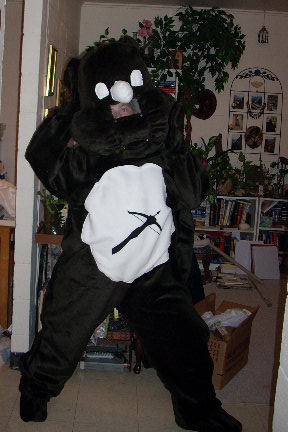 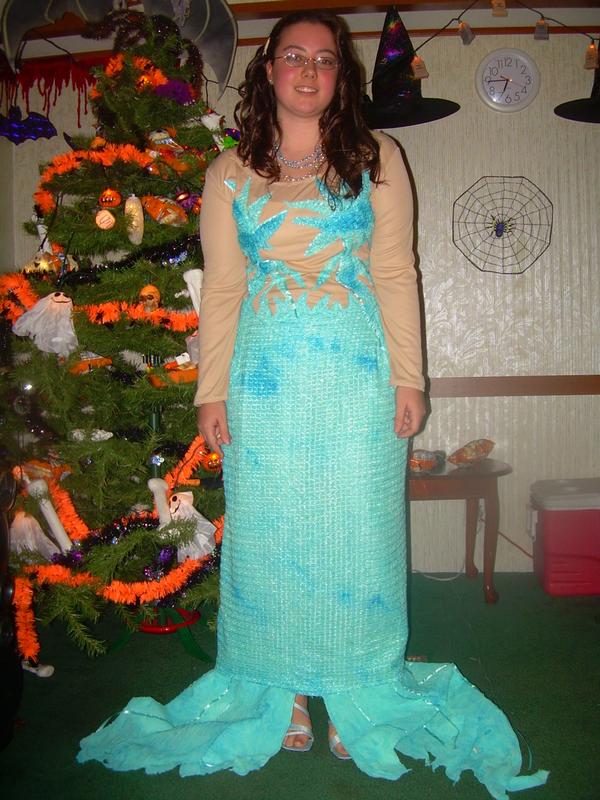 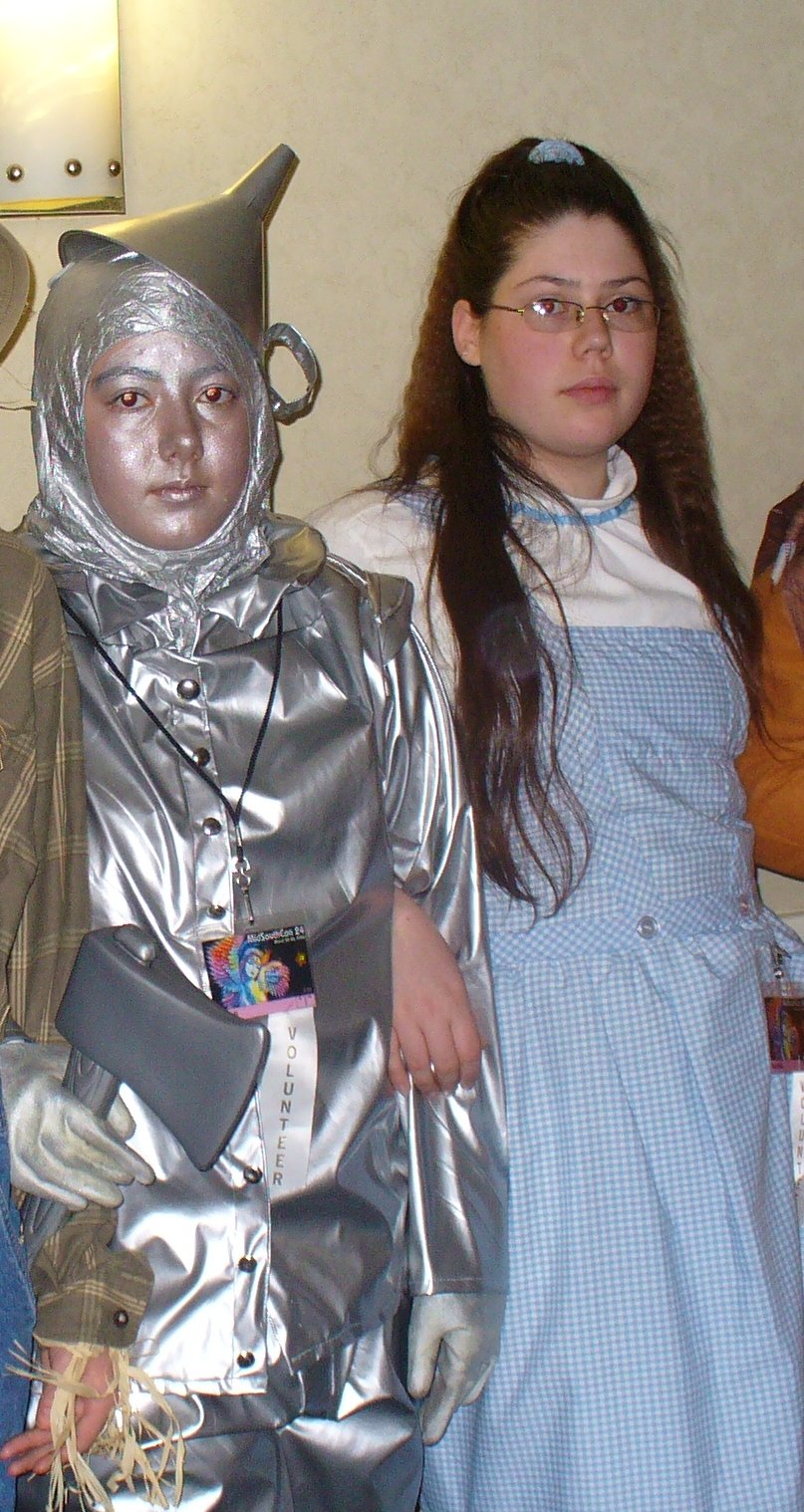 So serious as The Tin Man and Dorothy (yes, there are sparkly red shoes) in 2006

Facebook
Twitter
Pinterest
Email
Print
Previous articleBroadway legend ‘leaves us’ with memories and the magic of his songs
Next articleAcross the Universe: ‘Hair’ meets ‘Rent’ in a rock musical for the 21st century