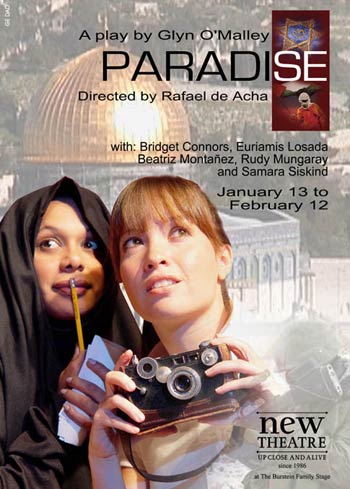 “Allah Akbar!” is the cry of Jihadists around the world. This motto of holy rollers shall soon be heard on Austin Peay’s Trahern stage. Glynn O’Malley’s Paradise will open in the Trahern Theater Wednesday November 14, exactly one year after the New York and former APSU resident artist’s death.

Paradise is the second part of O’Malley’s famous war trilogy and is set amidst the horrifying conflict between Israel and the Palestinian terrorists. The play follows the lives of two young girls, one Israeli and one Palestinian who in another place could have been friends. O’Malley follows their lives, their teenage crushes, their dreams as the cloud and horror of war looms over them and colors their world.

The show was first requested by The Cincinnati Playhouse as part of its educational outreach, but in the Post 9-11 world, the tour was cancelled and a threat was made to cease the production. However, the play eventually opened to a sold out opening night at the Kirk Theatre on New York’s Theatre Row in March 2005 for a limited run, and has since played to standing room only audiences through out the United States.

While O’Malley was a playwright at APSU, he often pointed the tragic events of 9-11 as the genesis for his war trilogy. The playwright spent the last five years of his life probing the psyches of religious fanatics, who commit unfathomable atrocities in the name of their God, and the victims of those atrocities. What O’Malley reminds us of in his trilogy is that those victims are not just on the battlefield, but also in those left behind at home during war, or in this case, two little girls caught up in a conflict they do not understand in a world that seems to be falling apart little by little around them.

While at Austin Peay, Glynn O’Malley met the widow of a fallen Fort Campbell soldier. Eventually, O’Malley established the Sgt. Ariel Rico Memorial Scholarship designated for the children of dead or wounded soldiers from the 101st Airborne Division. APSU’s production is directed by Dr. Sarah Gotcher, a long-time friend and associate of O’Malley. The play will run from Wednesday through Sunday with shows at 7:30 PM and a 2:00 PM matinee show on Sunday. The cost is $4.00 for students and $6.00 for General Admissions. Dr. Gotcher, respecting the wishes of O’Malley, has stated that all proceeds from the production will be given to the Sgt. Ariel Rico Scholarship. To reserve tickets call the Trahern Theatre ticket booth at (931) 221-7379.

James Butlerhttp://
James Butler is a student at Austin Peay State University pursuing a double major in both Chemistry and French. On campus he is particularly active with the Gay Straight Alliance and also somewhat less so with the AP Playhouse. Politically, he is often described as a libertarian, although he would personally affiliate himself with Ayn Rand's philosophy of Objectivism.
RELATED ARTICLES
Arts/Leisure