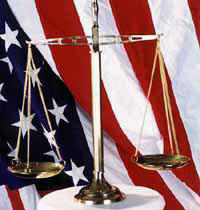 In 2004, as U.S. Citizens prepared to elect a president, professors at Austin Peay State University were told that they would not be allowed to discuss the current election with students. On Tuesday, just over three years after that pivotal election year, a mock trial was held on campus, a trial that pitted the United States against its president, George W. Bush, for violations of the U.S. Constitution, the Bill of Rights and the Geneva Convention.

The trial was staged as part of a Constitutional Law I class taught by Professor Greg Rabidoux, Ph.D., J.D., and included a panel of Judges, Defense Counsel and Prosecutors, and witnesses; it filled room 308 of the Morgan Center and was a “dream come true” for many of us in the audience. Class member Michael Price said he “jumped” at the opportunity to be a prosecutor in this case. 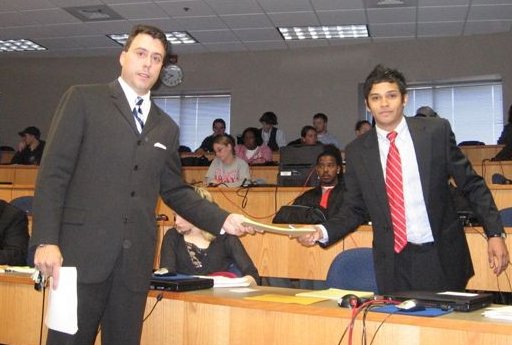 Dr. Rabidoux explained to the audience that he had incorporated several features and procedures from different judicial forums and different types of law to help students learn the most in the shortest amount of time. On Tuesday, the prosecution and defense read their opening statements to the panel of judges; the prosecutors presented two key witnesses, and cross examination and re-direct was allowed. Re-direct allows prosecutors to ask questions again of the witness after the defendants are done with cross examination.

It was obvious to me that it was difficult for everyone to present their statements, to be interrupted with questions, be interrupted with objections about “leading” witnesses, changing the question, listening and voicing objections. Still, they did very well, and as the process went on the students improved their strategies, thought processes and reactions. The Judges had a time period of asking questions of both sides. The prosecution offered ample evidence of detailed case preparation: they knew their stuff. Judges asked for definitions and how each side stood on the issues.

A defense attorney tried to get a witness to say that we didn’t violate Iraqi citizen’s rights because we are at “war with terror,”not with the Iraqi people. When asked for facts she said, “It’s all over the news!” as if that proved it.

Day 2 of the U.S. vs Bush continues Thursday, Nov 29, from 9:30 – 11:00 a.m. at the Morgan Center, Room 308. The day’s agenda includes the presentation of defense witnesses, rebuttal witnesses and closing arguments. This landmark APSU event is open to the public.