Cleaning and ‘greening’ an urban landscape 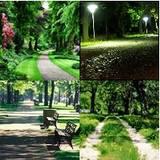 Mayor Johnny Piper’s plan to clean up vacant lots around the city is a giant leap in moving the city forward and instilling a sense of civic pride. It goes hand in hand with efforts to clean up litter; it’s the kind of action that sets a positive example for the community at large.

Though some communities use tax dollars to fund such actions, in the late 1980’s one northern city and its then 27-year-old newly elected mayor, Daniel J. Szostkiewicz, opted to launch a clean up the dregs of a decaying city landscape and move urban renewal giant steps forward by obtaining a federal grant for the walloping sum of two million dollars — for clean up. There was a lot to clean up. 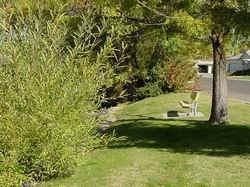 The Western Massachusetts city of Holyoke at that time was the referred to as the “arson capitol of the world” for the number of vacant, abandoned and burned out buildings that littered its landscape. Once an industrial capitol, the “Paper City,” known for its manufacturing of paper and textiles, ran on river power and an innovative and extensive canal system that harnessed water power. Nearly a hundred years later, Holyoke became a city of boarded up five- and six-story brick blocks and abandoned, burned out factories frequently used by drug dealers as squats, lookouts, and places for their nefarious business. Holyoke after the 1960s was a city of empty, rubble-filled lots, the remains of dozens of fires that destroyed many of these buildings. Piles of charred debris were left behind. It was not a nice place, though it retained roots and a fascinating civic and industrial history.

In the once vibrant downtown shopping district, business shifted from the heart of the city to its outskirts via malls and industrial or business parks, the core of the city became, to put it mildly, little more than a slum of empty storefronts in a high crime district, a city with debris-laden empty space not unlike Clarksville in the aftermath of the tornado. Gaping holes formed in the economy and former vibrancy of downtown. So began the audacious plan to clean it up.

Szostkiewicz’ then famous words went something like this: “I’d rather see a vacant lot leveled and planted over with grass, a few trees and some park benches, anything but this pile of rubble. ” He applied the same opinion to boarding up buildings and fire rubble.

Szostkiewicz, who brought the city to a finalist position for “Civic Livability” in 1988, applied for and won a grant to take decayed properties abandoned by absentee landlords and level them, scour them out, clean them up. Within a year, a year of bulldozers razing irrevocably damaged buildings and dump trucks laden with debris, a dozen patches of green space sprung up around the city, some used as mini parks, some as small playgrounds with modern playscapes for young children. The lots cleaned up the look of the neighborhood, and began the slow process of inspiring not just a new sense of pride but a renewal of community. Greenspace tends to create that trickle-down effect for positive change. 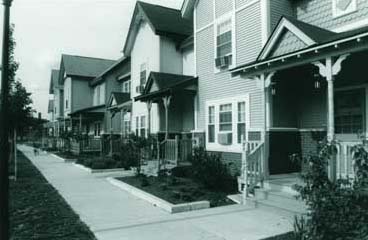 Szostkiewicz believed the investment in this clean-up of vacant lots would pay long term dividends. It did. In a spurt of renewed energy, an incubator business group began developing affordable housing that created pride of owner and a renewed community in a former slum. The housing authority tore down decaying buildings known as Jackson parkway, replacing them with Churchill Homes, a new Victorian style mixed income apartments and owner-occupied units in a row house style (at right) that went with significantly tightened and enforced standards for occupancy of public housing. The new homes and apartments have stayed in prime condition.

In the area of South Holyoke and “The Flats,” where blocks once housed the workers for the paper mills, empty lots began filling up with small owner-occupied duplexes, first one, then another, until a decade later a new and energized neighborhood emerged. In neighborhoods of old homes, small parks appeared in vacant lots, and people began using these mini- parks. Given the size of the community’s Hispanic population, community involvement and the involvement of non-profits such as Nueva Esperanza became a critical component of this renewal. It began with a little thing called “clean up.”

“Nueva Esperanza is a community development corporation that was born, like a phoenix, out of flames. In the early 1980s, Holyoke was averaging nearly one arson per week. Oftentimes, property owners were setting fire to their own buildings to cash in on their insurance policies and, simultaneously, rid themselves of the responsibility of maintaining deteriorating buildings. Unfortunately, many buildings were occupied at the time of the fires: a dozen people were killed, and 600 others were displaced. Nueva Esperanza was developed by activists and concerned citizens in the Puerto Rican community of Holyoke to fight the arson, and to restore the neighborhood, both physically and socially.

Nueva has used Community Development Block Grants, Low Income Housing Tax Credits, and other funding mechanisms to create 400 units of affordable housing since its inception. Most of these units are in buildings built around the turn of the last century, buildings that are virtually irreplaceable in today’s economy. One architect familiar with Nueva’s work estimated that it would cost at least twice as much as the cost of rehab to build a new building with the same level of architectural detail and quality. In addition to rehabbing the buildings, Nueva Esperanza worked with the city to plant street trees and widen sidewalks on some of the residential streets, resulting in a very pleasant, pedestrian-friendly environment.

One former factory now houses a state-of-the art children’s museum. Vintage trains offer foliage runs and other tours from the former and now refurbished train depot. Another factory is now a complex for artists and artisans. A historic merry-go-round was rescued from a deteriorated amusement park. Now, completely refurbished, it graces a city park. Imagination unleashed.

Nueva Esperanza is a prime example of a community/municipality collaboration that worked. Holyoke has a unique history linked to it’s major waterway, the Connecticut River, not unlike Clarksville and its historical relationship the Cumberland River. It’s a resource to be tapped, waiting to be utilized to its full potential. Clarksville has many charming homes and cottage/bungalow style homes in the older sections of town that are worthy of renewal rather than replacement, an act that would retain the city’s unique and historic look rather than replace it with cookie cutter condos and apartments.

In thinking about the clean-up and the potential installation of greenspaces, the city might also look to business sponsorships in the same way that business and civic organizations sponsor traffic islands.

As Clarksville looks to cleaning up its vacant lots, it should seek revitalization grants (the term for what was “urban renewal” in the 60’s) to fund this specific effort. Just as there are Main Street monies available, there are “clean up” grants floating around out there. Mandate that owners clean up these abandoned sites; if they don’t, place a lien on it and clean it up anyway — using renewal grant funds.

Greenspace, that sought after space of cool grass, a sheltering tree or two, park benches and maybe a small playscape or two is an infinitely wiser move that letting vacant lots lay fallow. It is a baby step, albeit a prized one, on the path to revitalization.