HomeOpinionUrban sprawl and the building of people-friendly communities
Opinion

Urban sprawl and the building of people-friendly communities

On the Road in America is an occasional column of thoughts, ideas and observations from my travels. 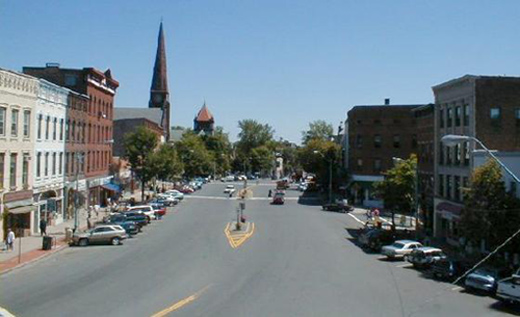 When I first moved to Clarksville four years ago, I was initially fascinated with the immense geographic area of the city. It was an “urban sprawl” that included an explosion of multiple housing developments. It looked, for the most part, like the bedroom communities of exploding around New England’s major cities. Sort of. But less well planned.

In fact, the photo of downtown Northampton (above left) looks a lot like Franklin Street with the exception of the width of the Main Street, which is large enough for multiple lanes of traffic, angle parking on both side of the street, and in the winter, mountains of snow plowed into the middle of the road until the bucket loaders roll in and haul it all to the river. Just around the corner is Smith College, perhaps a tad larger than APSU, but not much. Crosswalks are located on every block and motorist beware: you will be ticketed for failing to yield to pedestrian right of way everywhere in the city. People walk, bike and bus everywhere in this city.

Yes, upon arrival Clarksville (at least the Franklin Street area) looked a lot like home. Then I took a closer look. One of the first things I realized was that pedestrians were at a premium — not many of them. NOBODY moved about on foot!The next thing I realized, since I was now living in the company of high energy grandchildren, was that city planners, including the zoning commission, as they authorized unfettered development citywide, seemed not have considered the social isolation such developments have for young people. Housing developments may offer a network of friends who ride the school bus every day together, but there is usually no neighborhood store, no neighborhood pool, no neighborhood anything — just other houses, without or without parental presence. Miles of other rubber-stamped houses. Not one school mate lived close enough to be independent of parental transportation.

Such developments create a level of isolation by requiring that children, adolescents and young teens be driven everywhere — to dance class, to soccer practice, to library programs, to movie theaters, to a skateboard park, even to friends homes. Unless you risk riding a bike on the most local of streets (and you take life-threatening risks riding on any of Clarksville’s main or side roads), young people are left with nowhere to go and little to do to vent their boundless energy, unless and until they have cars of their own (which creates its own set of issues). Until then, they hang out, bored, or maybe filling life with mindless TV, video games, and and the mischief they can get each other into.

Now I am not so naive that don’t know it’s a much different world out there. A world that is post Vietnam, mired in Iraq, littered with predators and dangerous traffic, and with ever-diminishing faith in the “powers that be.” I always look to the future, but sometimes I miss yesterday.As a child and teen, I was able to walk everywhere. Bike everywhere. And ride the bus everywhere cheaply. My 4-H club was 15 minutes up the hill, a quiet evening walk along a steep, winding, wooded road to the neighborhood called Willimansett Heights. Because it was up on the hill overlooking Willimansett proper. The local beach (a large pond) was 15 minutes up another hill. The swimming pools in my city or across the river were five or ten minutes away (we had three to choose from; no fees involved). If all else failed, there was the brook, which enterprising kids could dam up and sit in on a hot summer days while terrorizing the crawfish. 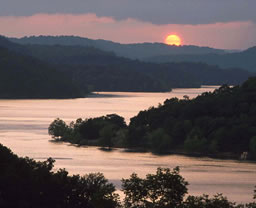 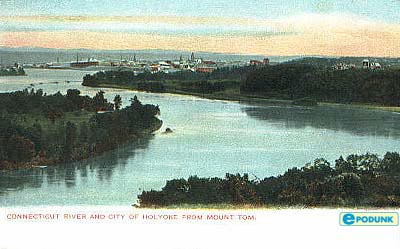 Clarksville’s Cumberland (left) and a vintage view of the Connecticut River south of Northampton MA;the similarities so strong they could be meandering through sister cities. The difference in is how they are developed to serve all the citizens of a community.

The branch library was a five minute walk away. My best friend and I walked a mile over the bridge to the next town every Saturday morning for our sewing classes. We took the five minute walk to the neighborhood movie theater on Saturday afternoons, which went faster if we were running in the rain, slower if we plodded through snow or paused for snowball fights. We went to each other’s homes to hang out, but there was usually a parent somewhere to keep an eye on us.

We couldn’t get away with much; if our parents didn’t catch us, someone’s else’s did, and were subject to the true spirit of our unified, multi-cultural neighborhood moms: they talked to each other and “tattled” over backyard fences in the French, Greek, Polish, Portuguese and Italian of their heritage. Beyond our everyday American English, we all knew bits and pieces of our ethnic language; if our moms and grandmothers reverted to that ancestral tongue we knew we were in BIG trouble. Our moms had the necessary words rapidly spoken in all languages that kept us from getting away with anything. Punishments were tougher than “time outs” or “grounding”: punishment came with extra chores, based on real need or invented to address specific infractions.

In my neighborhood, trees were everywhere: great for climbing, for the installation of tree houses, for games of hide and seek, for sitting under to read, to hang a tire swing on, for firewood and kindling (deadfall), for summer shade, and as sound barriers from the state highway a block away.

I look around Clarksville and see fields filling up with houses, trees plowed under regardless of aesthetics or environmental impact. Few here seem to have heard of berms – those little hills planted with trees and shrubs that create a natural, non-synthetic barrier between high traffic roadways and mushrooming single family and apartment complexes being built without people-friendly rhyme or reason. Well-planted berms, particularly in residential neighborhoods, attract birds (including many species whose decline is being documented locally by the Audubon Society) and other natural wildlife in addition to providing a bit of cooling to the earth.

Cluster housing is another environmentally friendly planning tool that creates greenspace in new neighborhoods. Builders might also consider working around well-established trees when creating their landscape. In new developments, the newly planted trees will be capable of supporting a swing not in your child’s lifetime but maybe in time for grandchildren. Don’t count on it for shade or a summer breeze. 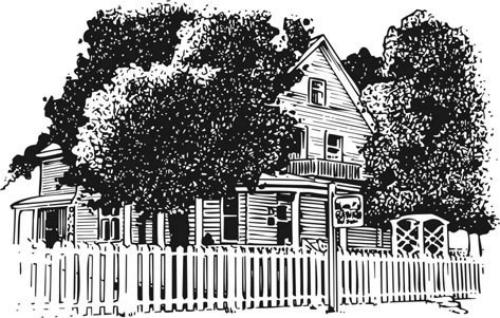 What my mom called “old timers” had it right: plant deciduous trees around the house (as you see around old farmhouses). They give summer shade, and lose their leaves in time to let as much winter sun as possible warm the house.The city’s building boom is overloading the natural landscape and the municipal infrastructure on every level: schools, sewage and water, public services. No one seems to consider the “total impact” of unchecked growth until a crisis such as the sewage problem in North Clarksville becomes a multi-million dollar crisis. When a 20-year-plan to build a new cross town road is expected to be obsolete by the time the road is actually finished, it just might be time to pause, rewind, and JUST SAY NO to unchecked development. 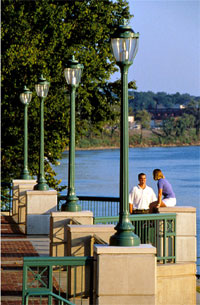 In the Northeast, where I am visiting now, I am continually amazed by the progressive and extensive mass transit systems that include late night buses, Sunday buses, neighborhood and multi-county feeder lines, and extensive “park and rides.” I am continually amazed by the inter-community bike lanes on major and minor roadways, the rail-to-trail bike baths that connect communities and counties, and the meandering — yes, meandering — sidewalks that add quality, charm and marketability to a community. The Cumberland River is not just for boaters.

I am equally impressed by the everyday sidewalks. Everywhere. With stringent and strictly enforced pedestrian rights-of-way. I read with disgust recently a comment made in the local press about teaching children to walk on the edge of the road to avoid accidents. Why not instead require sidewalks in every new development and between schools and the surrounding neighborhoods? What a concept! But perhaps that makes too much sense. Developers don’t want to tack on a few hundred dollars to the asking price of new home to cover the cost of sidewalk. 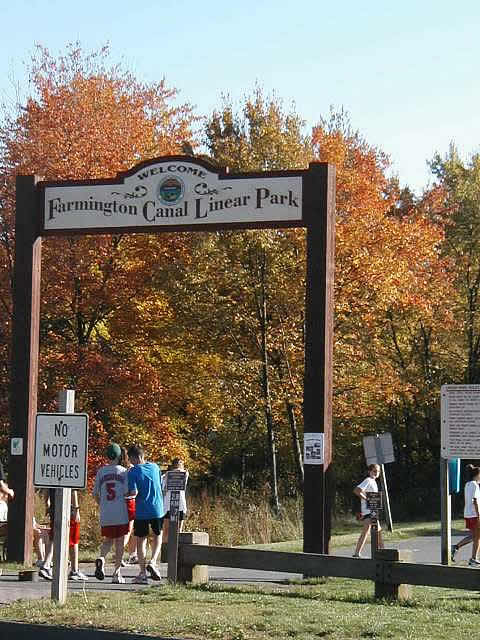 Perhaps most impressive along my northern excursion is the 84 mile long rail-to-trail combined path for cyclists, roller bladers, and walkers; it runs from Farmington, CT, to Northampton, MA, and give new use to abandoned rail lines while maximizing the physical attractions of the landscape, including stretches of riverfront. It is a progressive “destination.”When I first moved to Clarksville and began riding the buses, I was appalled to find that in order to take a southbound bus I had to cross Fort Campbell Boulevard’s seven lanes (the suicide line was the half-way mark) in high speed rush hour traffic, or ride an extra 20 minutes or more north and back to get where I was needed to be. No cross town buses — the option was ride downtown and transfer, which made a trip to mall a 1 1/2 hour excursion each way. No point-to-point express buses either, just rambling “milk runs.”

I hate to be the bearer of bad tidings, but progressive “gateway cities” address these issues. It’s called “crosstown” and “peak time express” buses. They also run well into the evening (as in 11 p.m. or even until 1 a.m.). They run bus service on Sundays too. Some run free shuttle buses from peripheral parking lots to key locations.Programs are continually created (Police Football Leagues are one, the new S.E.C.U.R.E. anti-gang programs are another) but one glaring issue remains: getting the kids to these programs.

Last Fall, S.E.C.U.R.E. was scrambling for a van to transport young people to and from their programs, a task being done by church volunteers. In an age where mom and dad both work a variety of shifts, where a car is required to access activities and events or a movie matinee, too many kids are stymied. Stranded in suburbia. Bored. That leaves them with the internet, mind-numbing TV and idle time.

Planning and development is a decades long process that can make or break a community and determine whether a city is a place you want to be or a place where you are, for whatever reason, simply marking time before moving on. No one is going to sit around and wait for 10, 20 or 30 years for a city to figure itself out. There are too many cities out there who have already gotten it right.

Clarksville’s biggest asset is its people: they are hard workers, community volunteers, artists, writers, teachers, and they come in all ages, shapes, sizes, cultures, and heritage. They are concerned citizens who deserve a concerned leadership to direct the future of they community they are vested in.Clarksville could have much to recommend it, but unless it figures out a way to serve all the people in all its compartmentalized neighborhoods, unless it forges a cohesive and unifying identity, one that address addresses heritage and culture, one that addreses quality and well as quantity in its development, one that is farsighted, one that factors in environmental awareness as a quality of life issues, one that is people, family and youth conscious, one that is just and fair in how it deals with the business of its constituency, it will never become a “destination” city or much more than the last big, cluttered cityscape to stop in for gas and a fast-food burger before crossing the Kentucky state line to somewhere else.