On a snowy road in America: snow, politics and wood-burning stoves 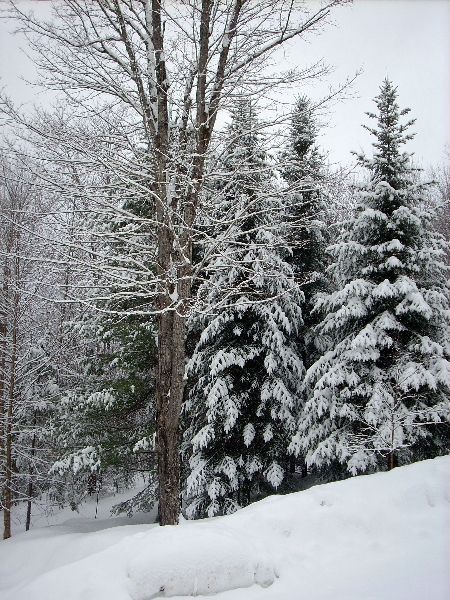 Crossing the state line into Vermont, the first thing I spotted — beside the snow — was a Ron Paul sign. Blue state, it screamed.

My first memorable stop on this On The Road In America sojourn was Brattleboro, a quick pause at the roadside trailer that serves as the Vermont Trailways bus terminal, and the first bit of local news: a story about the upcoming town meeting and a petition to charge President Bush and Vice-President Cheney with war crimes. That was followed by a jumble of news stories about the inroads John McCain is making in his New Hampshire presidential primary bid. I felt right at home. Snow on the ground and political discourse hot enough to melt it.

In the valley that cradles the Connecticut River, the haze of wood smoke hung low, wispy strands of thread connecting chimney after chimney to the sky. It costs money to heat with wood — and it’s labor intensive. But for hardy Vermonters, there’s enough deadfall in the forests and enough people to harvest it. Wood stoves in these country homes are often built for function as much as form; sturdy cast iron stoves with flat tops for cooking, for steeping water for tea, for simmering soups and stews throughout the day.

I hoped off the bus (well, crawled off the bus) after a two day trek, ready for a wintry stay at my best friend’s home, a mountain hideaway with, yes, a wood stove. With the heat it generates, and the carefully placed ceiling grates (heat rises), that one stove heats six rooms. Three up, three down. Toasty. 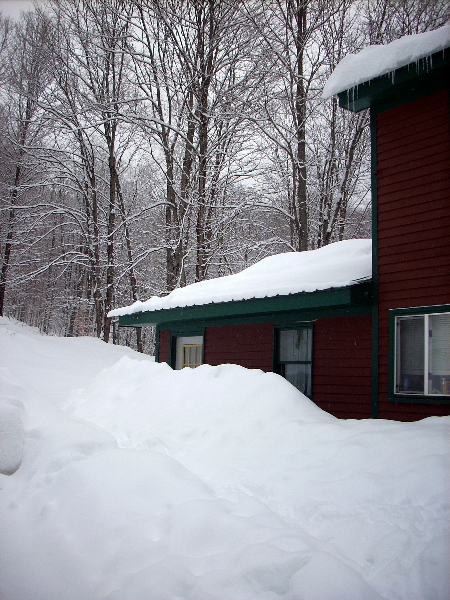 Last winter was fairly snowless; what a difference a year makes. THIS was the Vermont I know and love: snow. Measured by the foot. Soon to be measured by the yard. Huge sheets if it slipping slowly to the edge of the roof, finally reaching that delicate point at which tons of snow — the stuff we haven’t yet raked off the second story roof — tumble to the deck with a thunderous crash. No one, not even the new dog, blinks. We just head out and shovel the icy packed snow from the doorway and the deck, craving yet another path to the driveway.

Snow has already piled up half the height of the bird feeders, and another 8-14 inches is due on New Year’s Day. We may lose power; we will likely be snowed in. We’ll manage.

Many of my friends are aghast (perpetually) over my love of this part of the country and this season of the year in this part of the country. I don’t ski, but then, I don’t have to. I walk in the snow, or sit in a lawn chair on a snow-covered deck, and watch the red squirrels raid the bird feeders while hoping for a sighting of the local Moose population (they move through this back yard and the marsh below).

I smile when a neighbor/grandchildren, all of six years old, knocks on the door after dark, asking to borrow an egg. His snow pants are crisp with frosty snow, his cheeks reddened. He walked up the rocky trail that connects his house to grandma’s (over the river – almost- and through the woods…). He wouldn’t linger for a quick hot chocolate because he hadn’t had supper yet.

I linger over a discussion of how high gas prices have sent people scurrying to the local food shelf to bridge their budget gap between food and fuel costs. There are no short roads to work in Vermont; every worker’s commute involves long drives in the only kinds of vehicles that a shot at making it through the snow: four wheel drives. With gas hovering at $3.00 a gallon, the food shelf (i.e. food pantry) lines have grown 400% and the little volunteer-run food program in Woodbury is scrambling to meet a rapidly escalating need. With a recent broadcast suggesting gas will hit $3.75 a gallon by spring, these creative and dedicated volunteers see no end to the hunger crisis in sight. 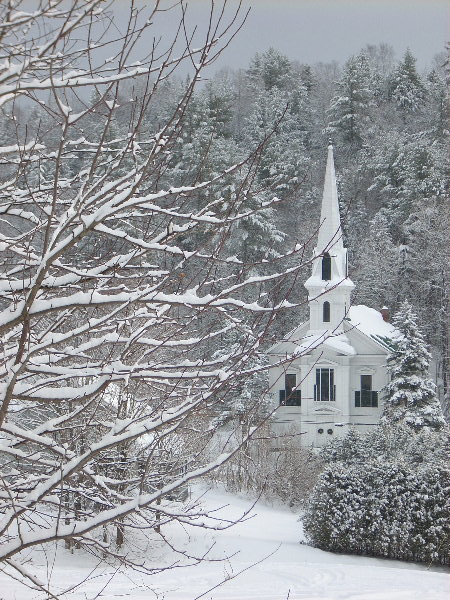 We spend part of the day driving around taking pictures (South Woodbury Church at left); it was the perfect snow — the wet, heavy kind that coats every branches, that wraps pines with a crystalline shawl. It shimmers.

As I download the days photographs into the computer, I thought about the ease with which I returned to this space, this place, this lifestyle, then realized it is part of me. Always has been. Will forever be.

None of us are waiting up for the new year; we know it’s coming — with more snow. So at 8 p.m., or maybe 9 p.m., we are heading for our rooms, our overstuffed quilts, and quiet sleep in a place where the city bright does not intrude.

Tomorrow we will watch the snow fly, and listen to the wind howl. We will melt marshmallows in hot chocolate, eat leftovers and the turkey soup we simmered yesterday on the wood stove. And we will keep that wood stove well-stoked.