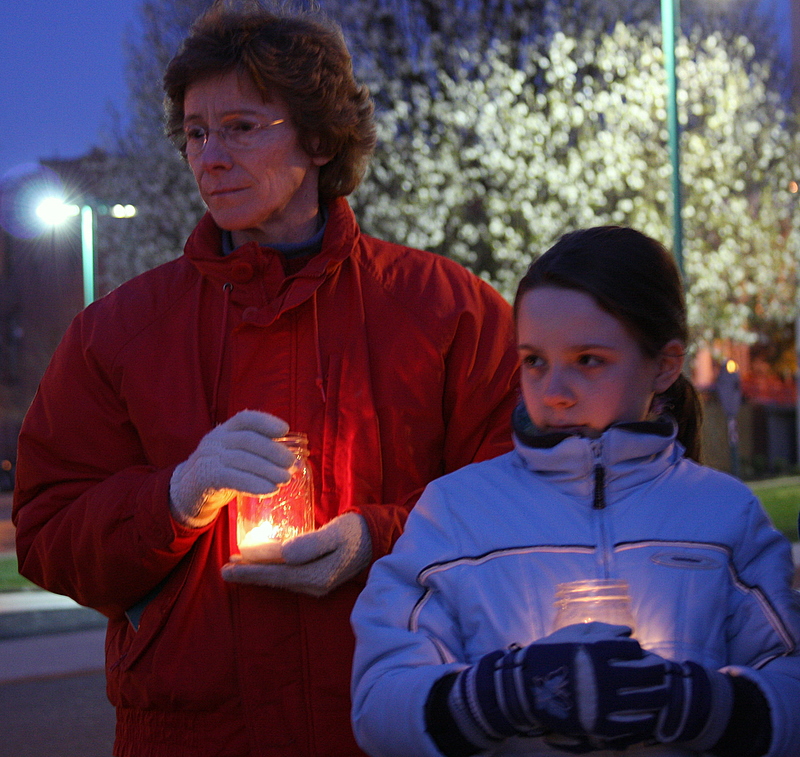 A group of eleven gathered on Monday at Public Square to light candles, view the statistics of war, read poetry, hear a song, sing a song, and acknowledge the 4,000 US military dead in Iraq.

We who gathered this time are all disconnected from the war, in the way that we are not relatives of anyone enlisted. But we know co-workers, students, clients, neighbors and acquaintances who are connected with the military. We are surrounded by military.

David and I read Christine Piesyk’s recently published poem, Songs, written for vigil we held 1,000 soldier fatalities ago. The pain of picking up all the pieces of war from Vietnam to Iraq, is potent angst; something that you never want to have to do again. It is unfair for wars to take our best, chop them up and dump them back on our society, often as shells of their former selves, haunted by the war they waged in the name of duty. We who oppose the war have good reason to do so. 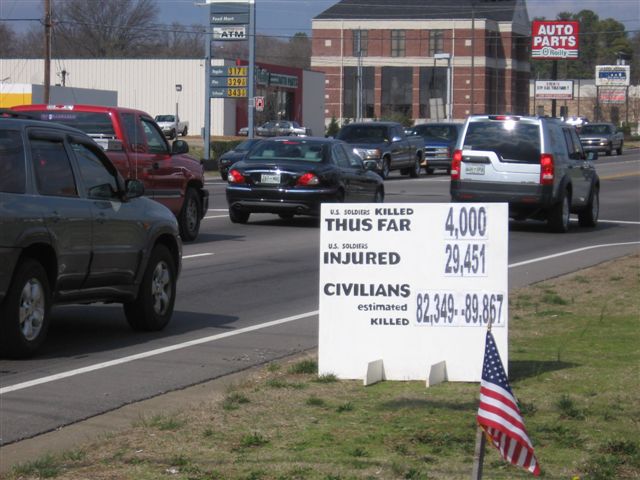 There is no good bomb. There is no good war, said my Grandmother, who survived WWI as a child in Germany. We who gather are in between, in between the “nothing is going on” stance of the media, and the overwhelming way the war rages on. In attendance this time were all middle class white Americans with one veteran. Three of our group were under 18. On this occasion, all of us except the vet, are Unitarian Universalists (UU’s). 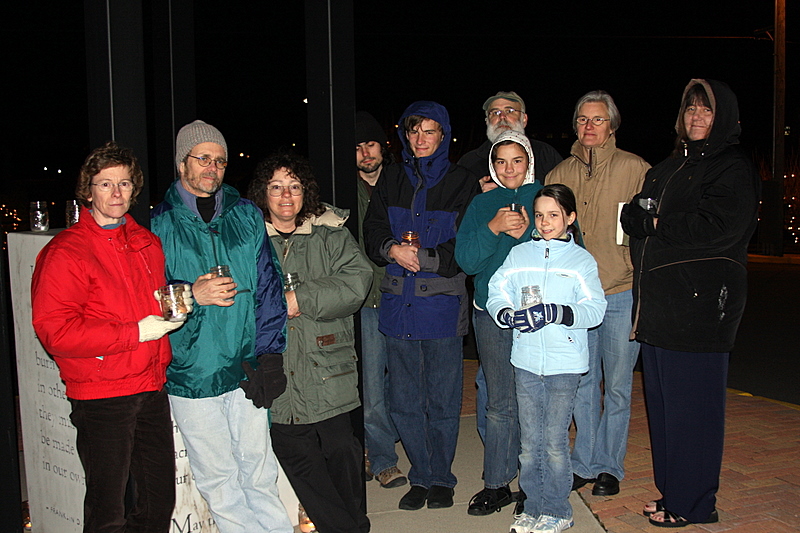 In 2004 when we held a vigil once a week, people drove by who applauded us while other people cussed us out. I used to think about those who cussed us out: “Someday you’ll be cussing us out for not doing more, for not stopping this war.” The complainers will always be just the complainers, never bridging the connection to action because they come from a victim space. I have more respect for the group who counter-demonstrated our vigil once, thinking we were dangerous. I applaud their ability to take action and they treated us with respect. 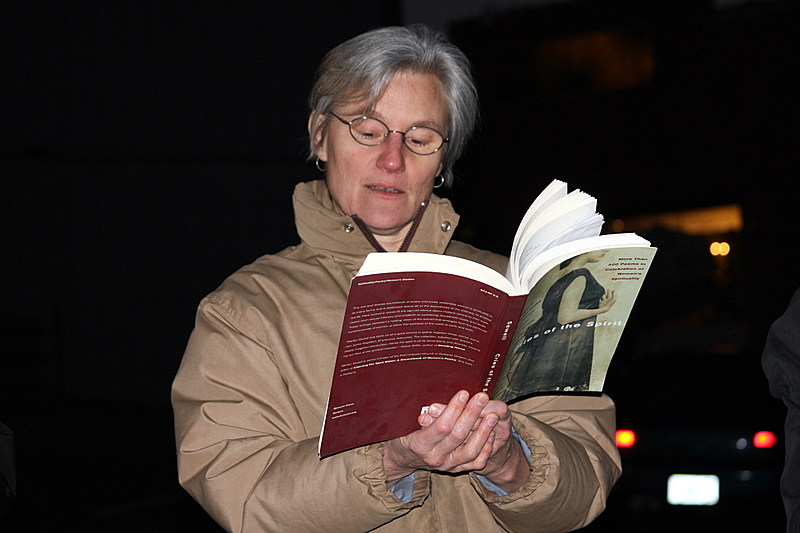 Almost every time we did a vigil, most of us really didn’t want to go. I would get stomach aches. I put this one off until the last minute because I didn’t want to face it. But we understand that it is the doing of something that matters. When overwhelmed, doing something, some little thing, is to feel some sense of power left, and it puts out the message that there is another voice.

What is sad is that we, a group of eleven opposers of war, are the only ones holding a ceremony about this tragedy. A lot of us feel that the sense of helplessness about the war overwhelms our sense of purpose. But all of us agree that even when we don’t want to go, but do go, we always get something out of it, which seems selfish. 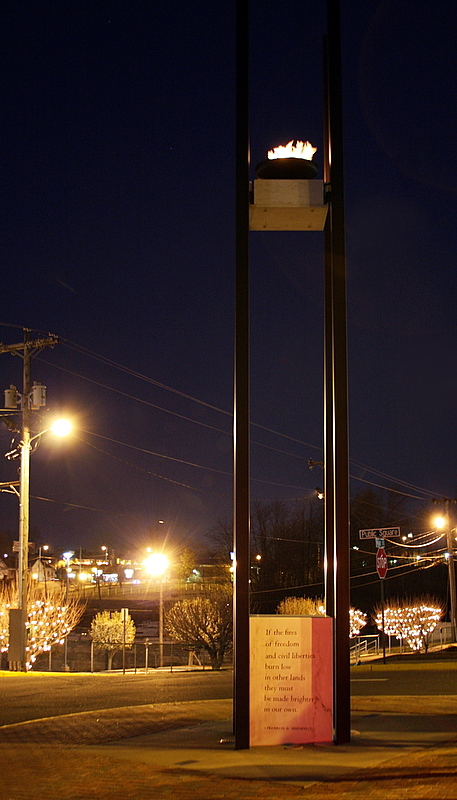 Marilyn sang a Girl Scouts’ song to us that girl scouts were not allowed to sing during time of war.  When one candle grows dim, may the candle of another light the way. We gather strength by the action of doing something. We face the reality of this war, there is no rah, rah, involved, and facing that is a most overwhelming process. We do not choose to feel depressed about it all the time. But it is appropriate to feel sad about this, Barry says.

The eternal flame is downtown’s only acknowledgment to the current war. Yesterday the flame atop the eternal flame was not lit, an insult to all veterans. Today it is lit. We would like to think ClarksvilleOnLine’s complaints and our vigil had something to do with getting the flame lit again. The war is to the point where the army base is like an invisible sucking hole. It’s grown more invisible, more obviously gapping. No one speaks about the obvious war. Wives “keep it together” somehow for the kids.

Our “volunteer” army of today is mostly married men and women with children, whereas in Vietnam they were mostly single, often draftees. Jill said whether we choose to think about the war or not, it is our problem. The soldiers who come back and try to fit in to our society will affect all of us, and their problems will be our problems. 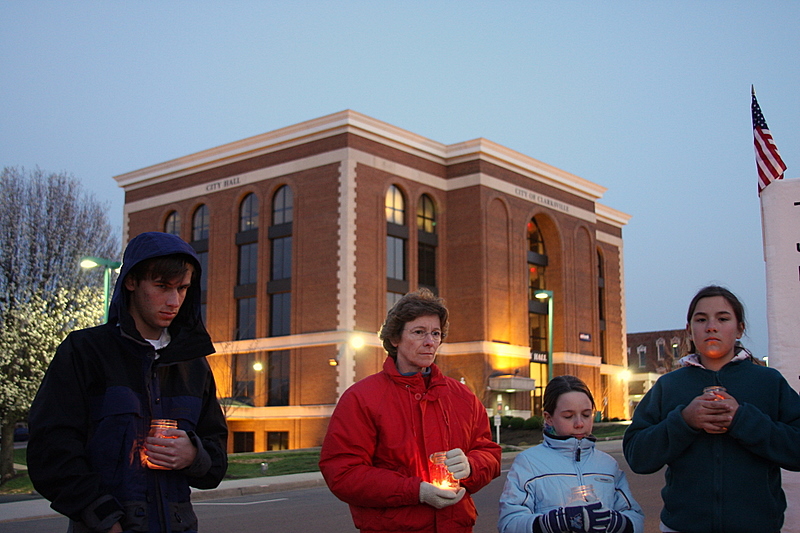 A few of us still feel angst about the idea that others will view us as not supporting the troops in doing this kind of vigil for them. They still feel the division that permeates the “support the troops” crowd who originally meant that they support the war and the winning of it. 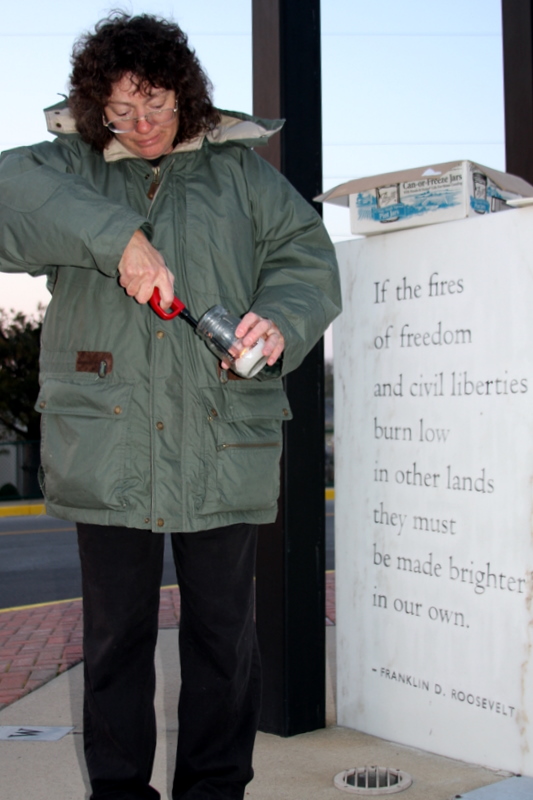 The division of people’s thinking, liberal and conservative, is something we have pushed the edge of since starting this movement. Conservatives calling us liberals had the upper bullying hand in this area, although it’s conservative to not want to go to war. It used to be Christian conservative. Don’t ask a conservative to say they were wrong about the war.

If we started with the purpose of driving that wrongness home we are beyond that. We are tired of being “right” and we want this injury to stop. We realize that the division between us was skillfully permeated by the media and our own government.

For us it’s always been about challenging the division, saying that there are other thoughts rather than Fox News propaganda/bullying agenda “so called” news. We are all in this together. We believe in the same things, unless you really want Armageddon — I don’t believe in that. Our basic heart beat is one of decency.

Take courage friends,The way is often hard, the path is never clear,And the stakes are very high.Take courage.For deep down, there is another truth:You are not alone. ~Wyne B. Arnason, UU closing words 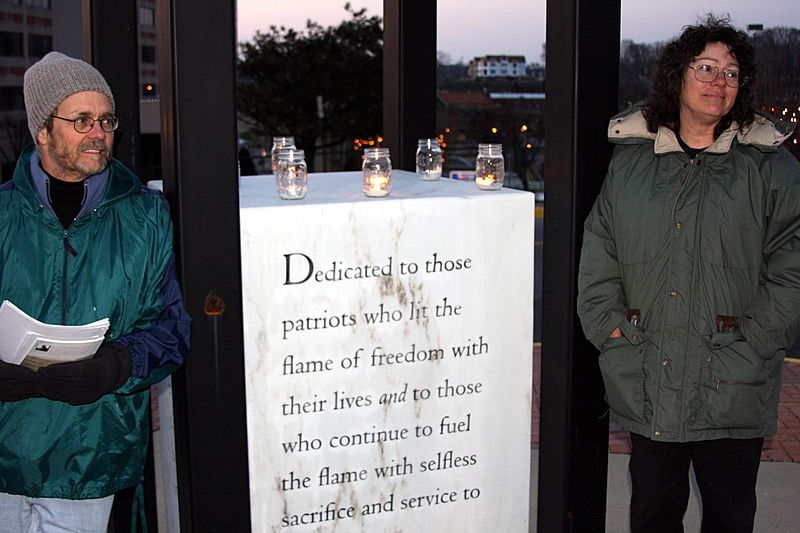 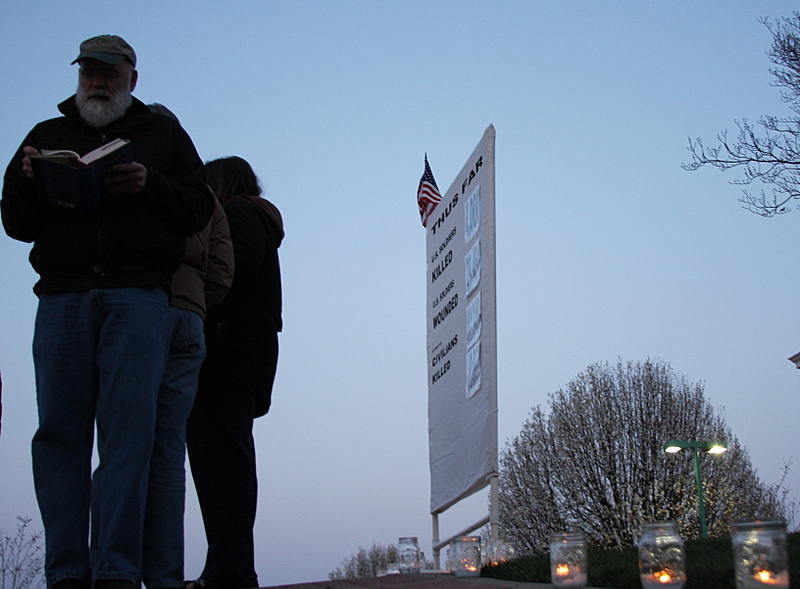 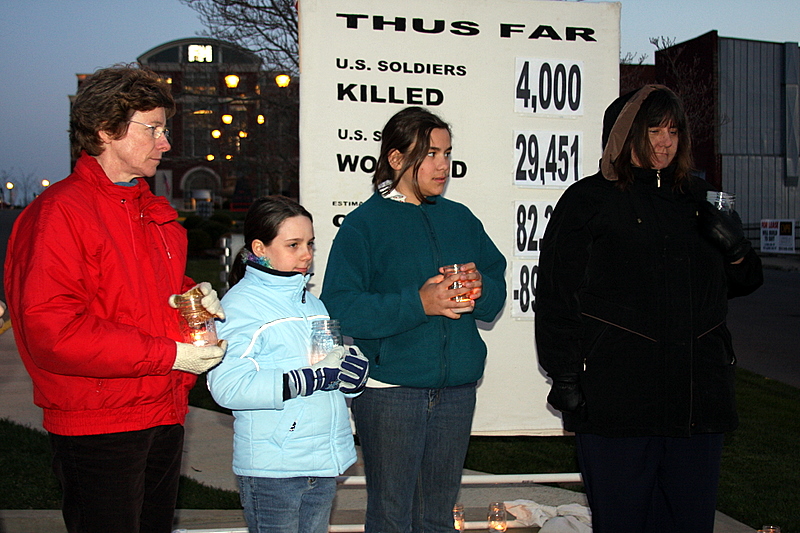