Crossing lines between church and state 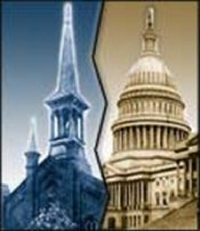 Controversy erupted last week in one South Carolina town over the posting of a politically-based query on the Church’s outdoor sign, a sign usually oriented to the more generic posting of denomination-sponsored events or church services.

Did Pastor Robert Byrd of the Jonesville Church of God step over the line in Jonesville, South Carolina, when he posted the following words outdoors on a church sign for all to see: “Obama, Osama, hmm, are they brothers?” Pastor Byrd maintained it was not intended to be racial or political and claims it was meant to foster thought about having a non-Christian, non-Christ follower, leading the country. Byrd says he doesn’t know if Obama is Muslim or not but wanted to pose the question. Quite frankly, I don’t see what spiritual direction or choice has to do with one’s ability to run the business that is the United States of America. I wasn’t a Romney fan for many reasons, but his Mormon faith was a non-issue. Funny how no one questions religious affiliation to Christian candidates such Mike Huckabee, who is now out of the race too.

Give me a break. It was a cheap shot based on dis-information and a desire to push a congregation of the opinionated and the blind-faith followers to back candidates like Mike Huckabee and others who would push an obvious Christian agenda all the way the White House, Congress and the Supreme Court. Their way or no way.

Now, I don’t care which way Byrd and his congregation vote; it’s their vote and their choices. I don’t care how many people they talk to or what they talk about with each other. I don’t care how a candidates prays. I want to know if can tell the truth, balance a budget, work with diverse people and ideas, have the ability to truly listen to the voting masses, and have — oh no, a dirty word: COMMON SENSE.

But to publicly pose such a BLATANT political-religious question on a church signboard is a clear as crystal violation of the separation of church and state. I was fed up with such church signage against gay marriage, civil unions, and abortion that popped up in recent elections around the country and right here in Tennessee. This just ticks me off. Sends me off the Richter scale. Why? Because this churches and all the others who receive massive tax breaks as non-profit religious entities are promoting their politics on your dollars and mine. This irresponsible and vicious taunt of a viable presidential candidate in 2008 is no different than Catholic churches reading letters from their Diocesan bishops against civil unions and gay marriage legislation (and the candidates supporting it) from the pulpit during Sunday morning Mass (which happened all over Massachusetts several years ago).

We all have opinions as individuals and as a part of the religious structures we support and endorse, but that does not give any of those faith-based structures the right to get into a public political fray. Today, more and more churches and religious-based non-profit organizations [read tax-exempt] are tossing their hat into the ring in an attempt to influence legislators and legislative actions. It has to stop. And since money talks, let’s go for the jugular on this one.

Churches (of all denominations and persuasions): If you want to be a political lobbying organization, file the papers and change your status and tax rates accordingly.

Become a lobbyist or lobbying organization.

Designate yourself as a profit-making center and be free to say whatever you want about anything you want and lobby for it. Pay the same taxes as other businesses and organizations with an agenda.

Otherwise, stick to the spiritual beliefs and moral values your particular faith espouses and leave irresponsible innuendo and public policy in the public arena, not on the church sign on your front lawn.

I am a feminist, and anti-war activist, and environmentalist, and advocate for human rights. I have an arena, a platform, a stage for that. I don’t foist my opinions on you through my church and its property or via my spiritual organizations while claiming tax breaks as a non-profit religious institution. I deeply resent the blatant politicking stamped on the face of non-profit religious groups.

Does anyone out there want to petition for penalties and potential loss of non-profit status for such obvious violations of the separation of Church and State?