ACLU: In defense of Constitutional rights 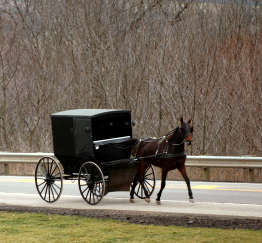 The ACLU is well-known throughout the nation but is frequently denounced by people who do not understand their mission. This organization is dedicated to the Constitution of the United States. For the ACLU, the Constitution is sacred, hallowed, and consecrated.

The ACLU focus is protecting the rights of individuals, whether they be in the minority or the majority. The ACLU shields citizens from abuse directed to minority groups. The are dedicated to defending, speaking up, and representing groups and individuals in court when said groups or individuals are threatened with loss of their constitutional rights.

An example of this singular purpose can be found in the neighboring state of Kentucky, as reported by the Associated Press. One recent headline, “ACLU to defend Amish on buggy light charges,” demonstrates ACLU involvement. In that article, distributed by Associated Press, the ACLU “will defend a group of Amish men in Kentucky charged with not displaying slow moving emblems on their horse-drawn buggies.”

Louisville Attorney William Sharp defend the seven men charged with not displaying state-mandated  flashing lights and an orange triangular symbol. The defendants said that “using the emblems and lights would violate their religious beliefs that prohibit possessions that are too worldly.” Sharp said the ACLU was interested in the case in the context of the Kentucky Constitutional right to the “free exercise of religion.”

The religious right of the Amish, a dedicated minority faith group, is being represented through the ACLU. The ACLU reminds us that we should all have the goal of respecting the religious rights of others and applying the principles of the U.S. Constitution and the Bill of Rights to all citizens regardless of their religious affiliation.

I am grateful for the ACLU and their dedication in protecting the American public.

Rev. Charles Moreland
Rev. Charles Moreland, retired, has lived in Clarksville for seven years and holds great pride in his adopted city and its people. His one objection in Tennessee is the Hall law of taxes on dividends and savings. Charles served in the U.S. Army Chaplaincy from 1966-1986, retiring to serve as a United Methodist pastor near Fort Leonard Wood, Missouri. He serves on the Boards of Directors for the ARP, Roxy Theater and MCDP. Though retired, he is a regular speaker at the Unitarian Universalist Fellowship. His five grandchildren, ages two to thirteen years, live in Evansville, Indiana. He is a veteran of the Vietnam War and served in Germany and Korea while on active duty.
RELATED ARTICLES
News