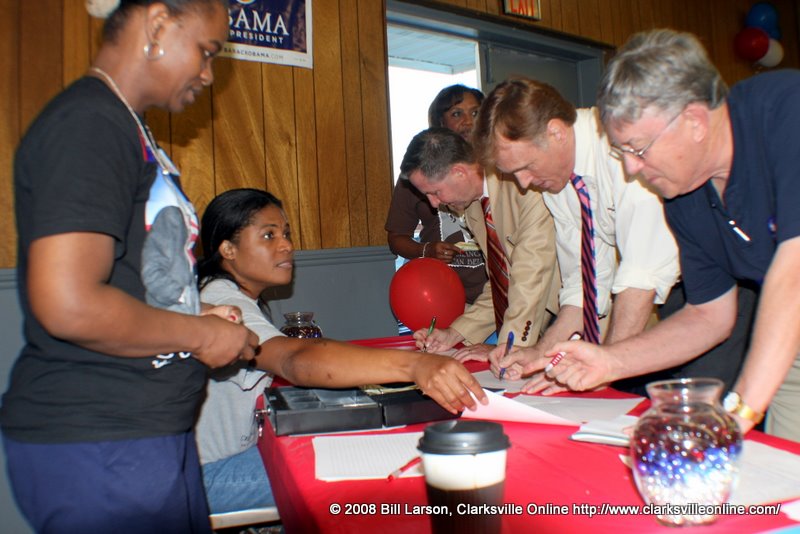 Clarksville for Obama, with an assist from the Montgomery County Democratic Party, held a fund raiser Thursday night  at the IAM Local # 129 Union Hall on 1296 Union Hall Rd.

U.S. Senate Candidate Bob Tuke and Senate District 22 candidate Tim Barnes were among the guest speakers, a roster that included candidates for state and national offices on the November ballot, and representatives of both the Democratic Party and Labor Unions.  Approximately 155 people attended the event.

Gene Lewis, MCDP chair, stood in for Kim McMiillan, who was unable to attend, as moderator for the event. He introduced each of the program’s speakers to address the gathering. 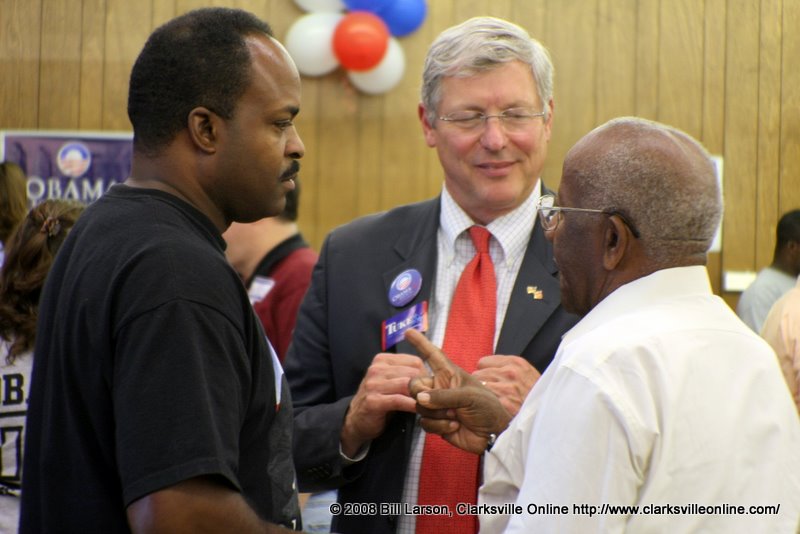 Tuke then cited Senator Barack Obama as a “great candidate” and declared he would make a fantastic president. He declared the current financial crisis, “is not an accident, it isn’t cyclic. It’s the result of mismanagement.” He noted that “President Obama” will need a supportive Senate and that means having at least sixty democratic votes in the Senate.

“I want to be that 60th vote that will end the Republicans filibusters. Barack and I need your help to make that happen.” — Bob Tuke 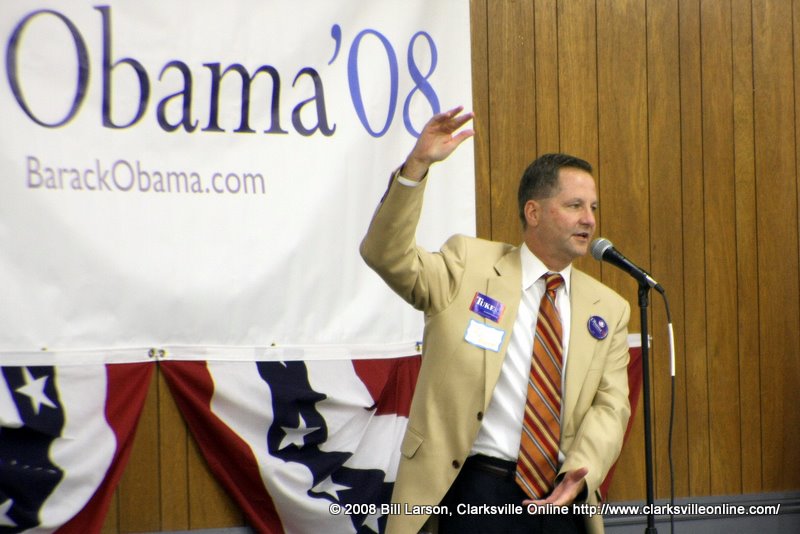 Tim Barnes , State Senate District 22 nominee, “To my many supporters, from the bottom of my heart, Thank You!” He declared that:

“There is nothing more powerful than a group of people dedicated to a cause. I stand here before you as living proof of that you can make a difference. It is essential we take this fight to the people. Senator Obama has the opportunity to straighten out the mess of George W. Bush and Dick Cheney.” 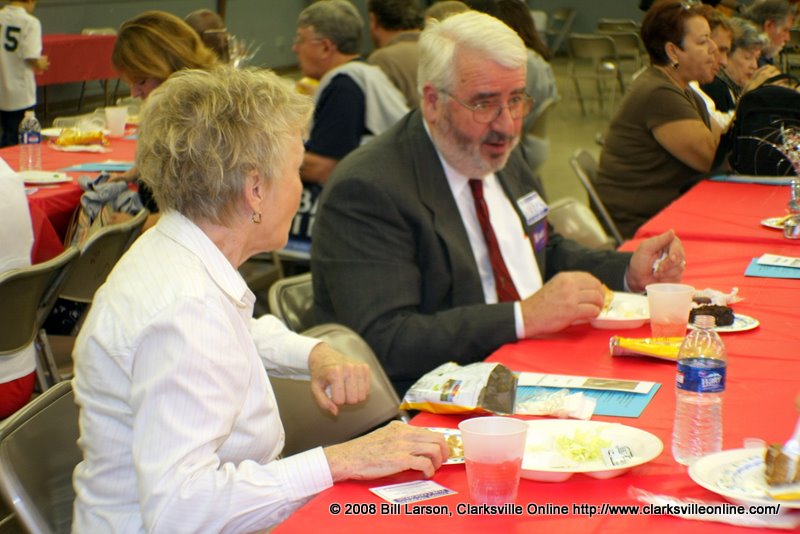 Randy Morris, candidate for US Congressional District 7, spoke out about Rep. Marsha Blackburn, regarding her 90 percent track record of voting with the Bush administration: “Poor Marsha, she never got it an she never will!” He supports Senator Obama’s energy program, saying, “We are going to have to get off our oil dependence. ‘Drill, baby, drill,’ sounds cute but it’s not the answer to our energy problems. We have to go with renewable resources.”

Wade Munday, communications director of the Tennessee Democratic Party, told the crowd of looking forward to seeing Bob Tuke retire Lamar Alexander in the US Senate and Tim Barnes sitting at the District 22 seat in the State Senate. He declared that with Barack Obama in the White House and Bob Tuke in the US Senate, Democrats are ready to take control and change this nation for the better. Jerry Lee, president of AFL-CIO Tennessee State Council, spoke next. He told the gathering that “our country must turn around. We must change our nation’s direction. We must elect Barack Obama as president.” 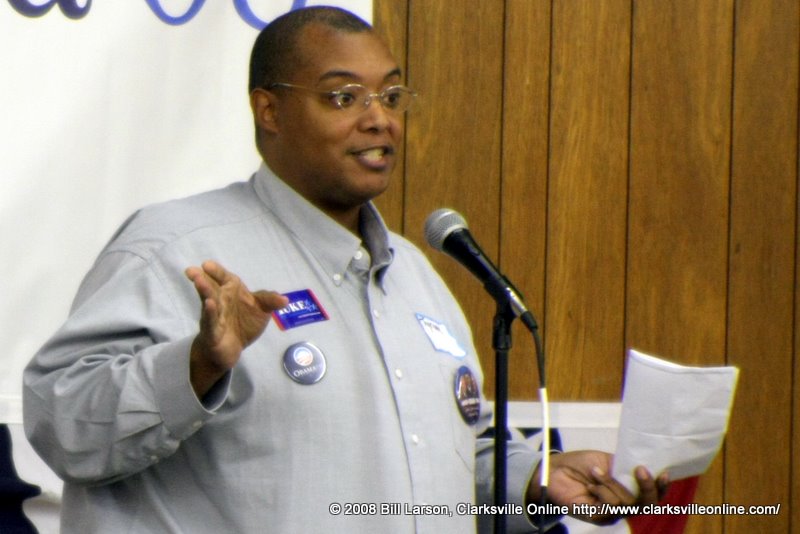 Tyrone Taylor (left), communications director for Clarksville for Obama, enthralled the gathering, saying that “Barack’s message of change, of empowerment was simply too powerful to resist. The Republicans view our situation as natural. It’s no big deal. They represent the past. We democrats represent the future.”

Jerry Martin, director of Tennessee for Obama, told the crowd that Montgomery county is going to be blue in November. Martin noted that “Tennessee is counted as a red state but in reality that is only a superficial cover. Our everyday politics are invariably blue. In June 2006, there were 3.5 million registered voters in Tennessee. In June 2007, that number had grown to 3.8 million registered voters.” He urged the group by October 6, 2008, (ed: the deadline to register for the 2008 election) to make that number more than 4 million. 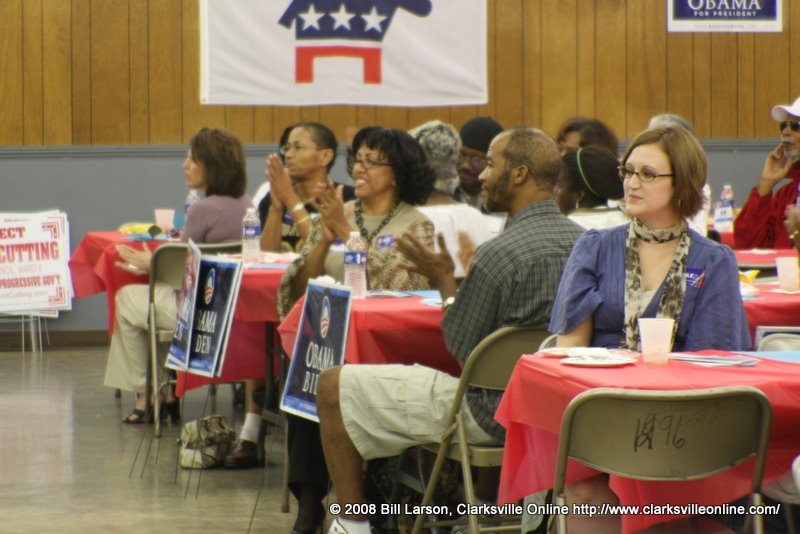 Martin also spoke of various attempts to disparage Senate Obama, false attacks on his name, his religion, and his character. He urged everyone to refer to the website, <www.stopthesmears.com> for factual information and counter arguments to refute these false attacks being circulated by his opponents. He told the supporters to respond to these untruths by referring the doubters to “stopthesmears.com” and ask if they know that Senator McCain (a) voted against the Women’s Fair Pay Act and (b) wants to tax their health care benefits. Martin said that September 30 will be celebrated as “Obama Blue Day,” a day when all Barack Obama supporters are asked to wear the color blue and register two unregistered voters. 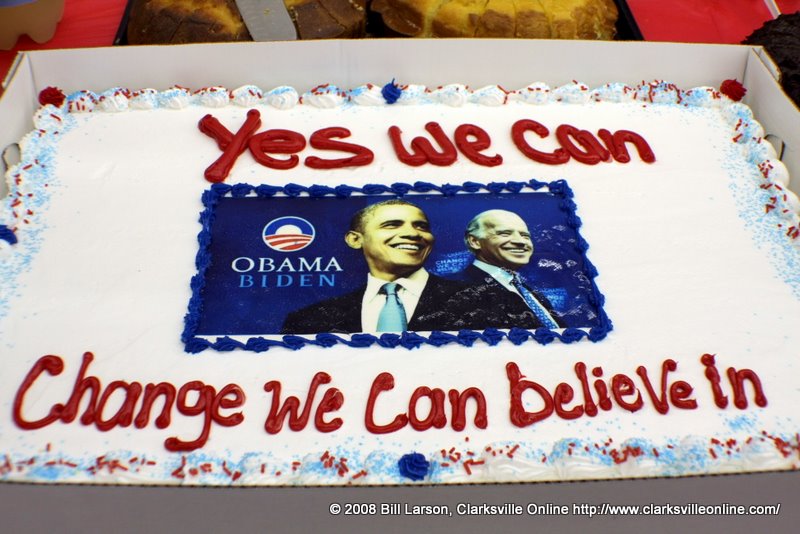 Refreshments for this popular event included a variety of deli sandwiches with condiments, chips and pastry desserts and soft drinks. The serving line, manned by Clarksville for Obama volunteers, moved the procession along smoothly and efficiently. Additionally, Campaign Obama t-shirts and yard signs were available for purchase. These tables were well visited.

Obama bumper stickers, buttons, t-shirts and yard signs, along with material for other campaigns, are also available at the party headquarters. Volunteer campaign workers are welcome. The next General Membership meeting of the Montgomery County Democratic Party is Tuesday, September 23, at party headquarters at 534 Madison Street, located at the corner of Madison Street and University Avenue, across from United Church of Christ. All Democrats and Democratic supporters are encouraged to attend.