The  APSU Music Department’s Christmas Holiday  concert, “Do You Hear What I Hear” opened to an overflow capacity crowd of enthusiastic music lovers. The buzz in the Music Hall’s air  was infectious. It proved a perfect aperitif to the performance that would unfold. 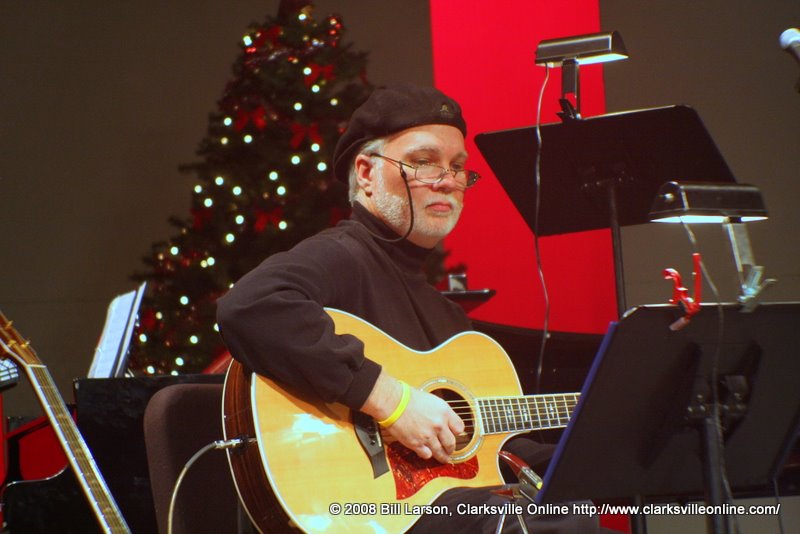 The guest artist of the evening was acoustic guitar specialist, Paul Carrol Binkley, a renown musician in his own right, and president of Grand Vista Music. He has served as music director for the Tennessee Repertory Theatre, the Nashville Shakespeare Festival, the Mockingbird Theatre, the Nashville Children’s Theatre and Coterie Theatre in Kansas City.   His artistry was delightfully blended with the talents of the  music faculty, resulting  in a simply sublime holiday music  showcase. 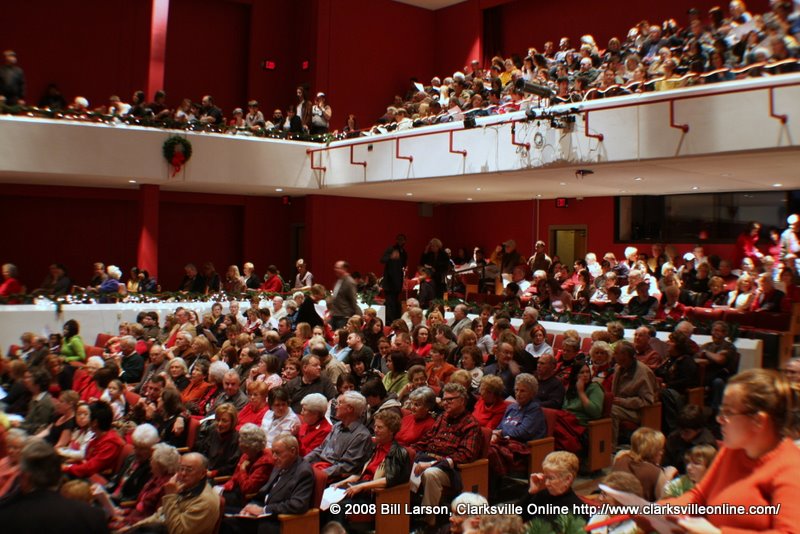 The concert opened with a solo composition of Binkley’s own creation, “With Today in My Eyes,” that was soft, plaintive, almost pensive. The strumming was gentle yet resounding.  This was followed with the first of six vocal selections of the program. “O Holy Night” was performed by Gail Robinson-Oturu, soprano, filling the hall with notes of wondrous clarity that gave new sparkle to this Christmas classic. Next came, “Little Drummer Boy,” with Paul Binkley -guitar, Jenaette Zyko – Oboe, Richard Steffen – trumpet and Matt De Vore-drums. De Vore opens the tune with a brisk drum intro and Binkley creates the story on acoustic guitar with vibrant strumming and is joined by the trumpet and oboe. As the piece concludes, De Vore’s drum reprise gives way as Dr. Steinquest  picks up an African drum and  gives a soft close to this well known season classic in this new arrangement. 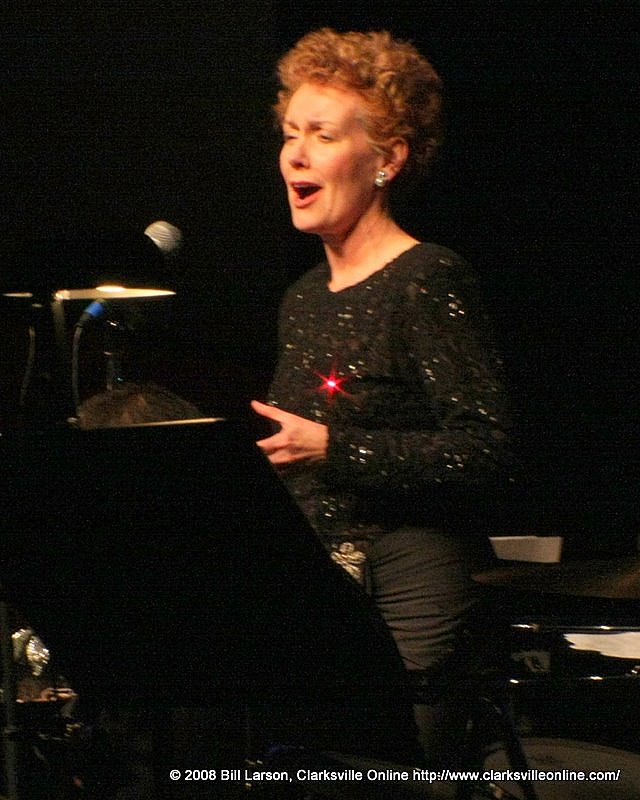 Mezzo-soprano Sharon Mabry performed Some Children See Him,” in  an evocative and compellingly enchanting voice that had the audience yearning for every note. Piano accompaniment was by Anne Glass. This song is elegantly simple in presentation yet powerful in its scope. Ms Mabry breathed vitality , understatement and revelation, cloaked in vulnerability, in her rendition.

“Silent Night” followed next, featuring violinist, Emily Hanna Crane. Ms Crane delivered the story voice on her violin  carrying the audience into the tune’s eloquent depths. The soft jazz-like accompaniment of guitar, bass and snare drum opened the song to new revelations in tone. The use of a violin bow on the vibraphon’s keys was an added twist to the playing that captivated the audience.

Tenor Thomas King then performed “I wonder as I wander.” Voice and song seemed perfectly mated as the subtlety and openness of this performance breathed new life with this song. “Bring a Torch,” followed. Performed in a traditional style , this  insturmental arrangement of flute, violin, oboe and harpsichord was airy, breezy and lite. This segued into Paul Binkley’s guitar solo performance of “Away in a Manger.” His guitar mastery again shown forth as he caressed this tune in soft strumming that played out into the music hall as gentle but eloquent recitation.

Mezzo-soprano Sharon Mabry returned to perform “Lo, How a Rose E’er Blooming.” With lifting voice, this classic was made intimate with the audience. Ms Mabry’s soft traditional opening was rejoined by Paul Binkley’s guitar touches and the bass/drum accompanyment lent melodic undertones to the song’s story. This segued back to Ms Mabry and Paul reprising their intro with an understated ending to the piece.

A unique combination then followed as “The Wassail Song” was combined with “O Come, O Come Emmanuuel” The crisp blending of two seemingly dissimilar classic Christmas tunes criss-crossed easily into one another, giving vitality to one another  and enveloping this new arrangement in a lively presentation. 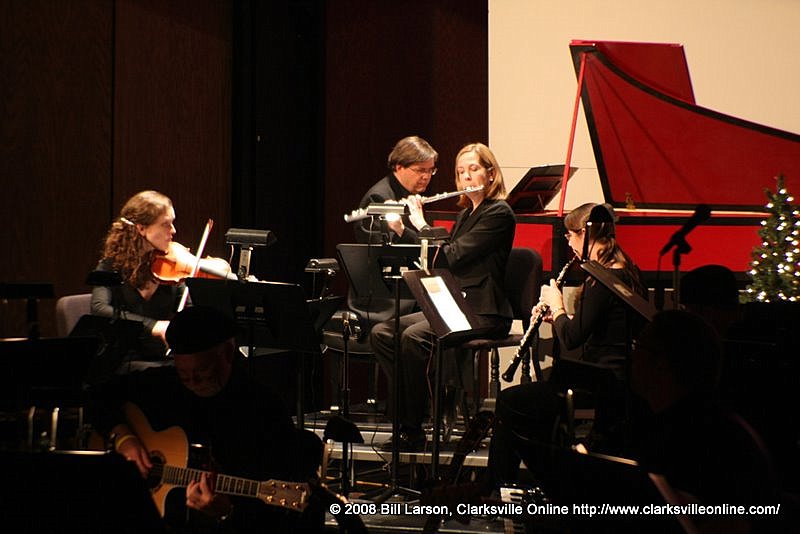 The APSU Percussion Ensemble next delighted the audience with their presentation of “Carol of the Bells.” The rising peal of the chorus of the tubular bells filled the very rafters of the music hall to the jubilant delight of the audience.

Soprano Gail Robinson-Oturu gave the final solo of the concert with her performance of “Ave Maria.” Those familiar with piece will appreciate the vocal range required by this Johann Sebastian Bach composition. Ms Robinson-Oturu met the challenge with ease and finesse. The arrangement gave her full command of the composition and she carried the audience along in her regal treatment of this subtle and yet exhilarating vocal delight. 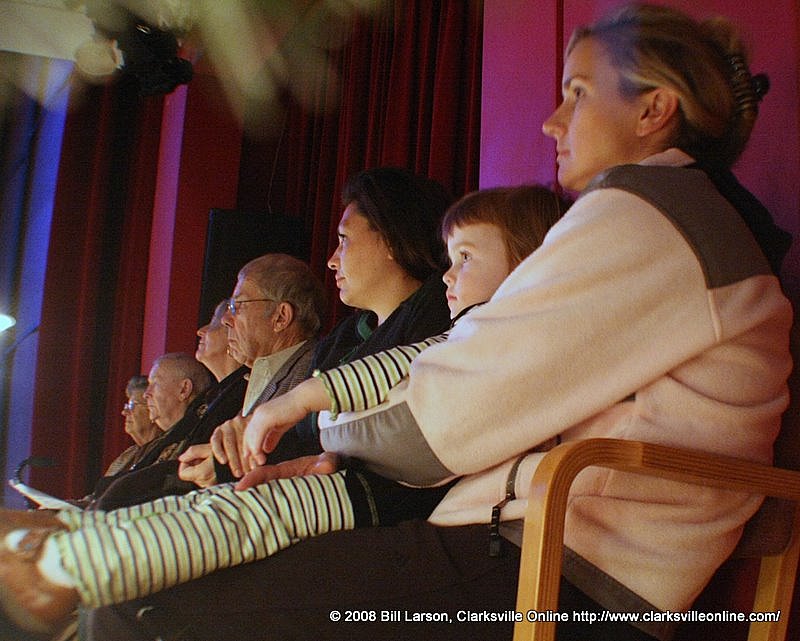 The concert ended with a traditional arrangement of  “Auld Lang Syne” that made complete the musical tour that was the holiday music festival of 2008. Mournful and yet optimistic, this tune looks to the weariness of the past and yet dares to anticipate the possibilities of tomorrow. The acoustic guitar proved a well suited voice for expressing these tones and carried the audience to a heartfelt warm closing of the concert. All of the evening’s offerings were given new skins, as it were, to give the audience a new way to perceive and appreciate these holiday classics.

The audience gave an extended round of hearty applause at the conclusion of this splendid presentation of holiday music given new vibrancy and life. As Dr. Steinquest acknowledged the music faculty and students who were part of this concert, a warm thank you was given to all for attending and best wishes for a joyous holiday season.

Greetings of the Season, to one and all!