HomeEventsProject Censored is Coming to Nashville on June 26th
Events

Project Censored is Coming to Nashville on June 26th 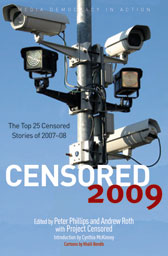 Nashville – Dr. Peter Phillips of Project Censored will be presenting a lecture at the First Unitarian Universalist Church at 1808 Woodmont Avenue in Nashville on June 26th at 7:30pm. The title of the lecture will be ‘Media Democracy in a Time of Truth Emergency.’ Project Censored is a media democracy project which has been highlighting the 25 most important stories ignored by the mainstream media through an annual publication and the website www.projectcensored.org.

Whether it is NATOs consideration of a “First Strike” Nuclear Option, Cruelty and Death in America’s Juvenile Detention Centers or the Seizing of War Protesters’ Assets, Project Censored has been there to highlight the investigative journalism that the mainstream media has failed to present to the general public.

According to Project Censored the top most under reported story of 2009 has been the violent deaths of over one million Iraqis since the beginning of the 2003 United States invasion of Iraq. “Over one million Iraqis have met violent deaths as a result of the 2003 invasion . . .These numbers suggest that the invasion and occupation of Iraq rivals the mass killings of the last century—the human toll exceeds the 800,000 to 900,000 believed killed in the Rwandan genocide in 1994, and is approaching the number (1.7 million) who died in Cambodia’s infamous “Killing Fields” during the Khmer Rouge era of the 1970s.”

Founded by Carl Jensen in 1976, Project Censored is a media research program working in cooperation with numerous independent media groups in the US. Project Censored’s principle objective is training of SSU students in media research and First Amendment issues and the advocacy for, and protection of, free press rights in the United States. Project Censored has trained over 1,500 students in investigative research in the past three decades.
Through a partnership of faculty, students, and the community, Project Censored conducts research on important national news stories that are under reported, ignored, misrepresented, or censored by the US corporate media. Each year, Project Censored publishes a ranking of the top 25 most censored nationally important news stories in the yearbook, Censored: Media Democracy in Action, which is released in September. Recent Censored books have been published in Spanish, Italian and Arabic. According to Walter Kronkite, “Project Censored is one of the organizations that we should listen to, to be assured that our newspapers and our broadcasting outlets are practicing throrough and ethical journalism.”

Peter Phillips is the director of Project Censored since 1996 and co-editor with Dennis Loo of Impeach the President. He is the recipient of the 2009 Dallas Smythe Award from the Union for Democratic Communications. Dr. Phillips is a Professor of Sociology at Sonoma State University in Sonoma, California. Introducing Dr. Phillips will be nationally known peace activist Bob Bowman. Admission is free.